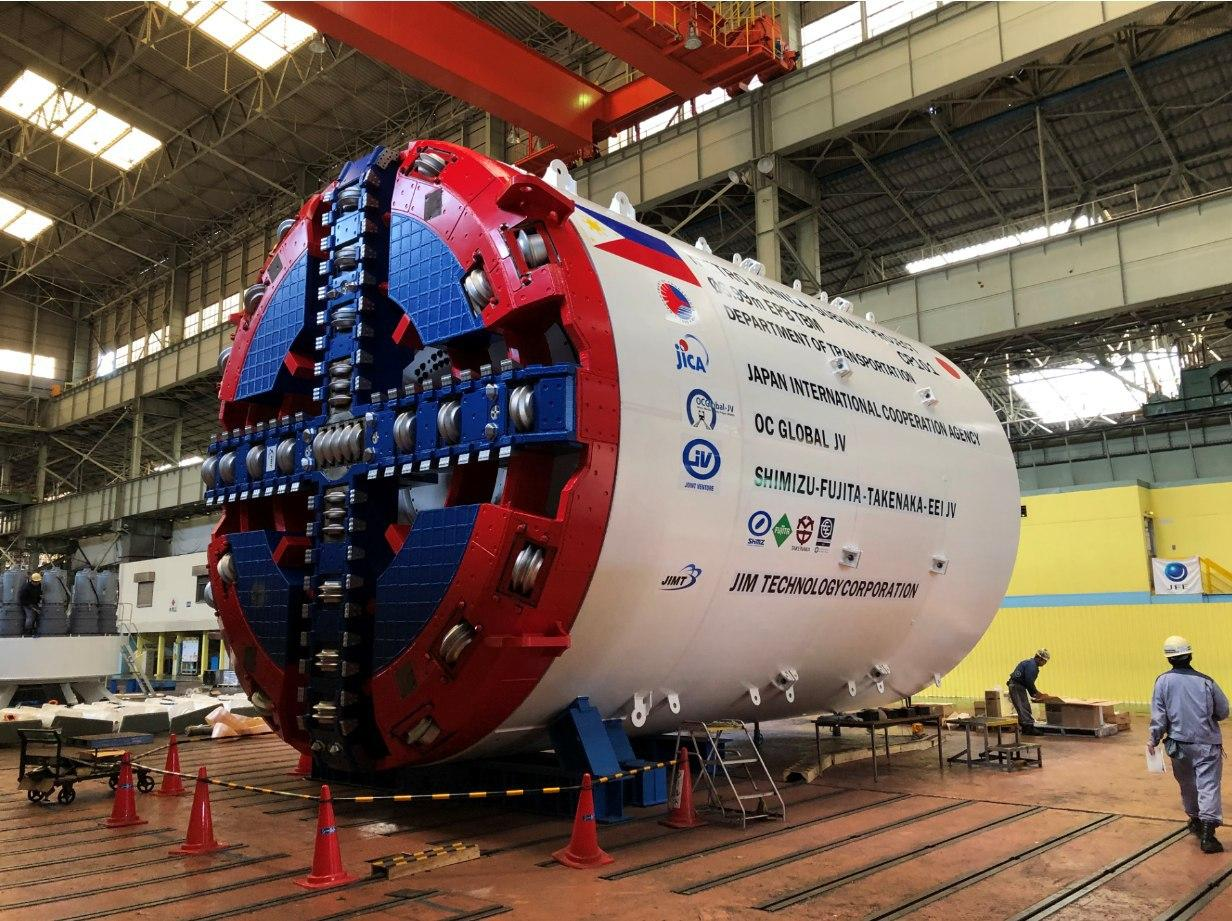 TUNNEL DRILL. This Japan-made tunnel boring machine — the first of six to be shipped to the country — will be used to dig tunnels for the 17-station Metro Manila Subway Project. —PHOTO COURTESY OF DOTR

MANILA, Philippines — Transportation officials are one step closer to constructing the 17-station Metro Manila Subway Project, as the first of the six Japan-made tunnel boring machines (TBMs) will be shipped to the country in January 2021.

Measuring 6.99 meters in diameter and 95 meters in length, the 700-ton TBMs will be used to dig underground and lay the tunnels for the 34-kilometer project, spanning Barangay Ugong in Valenzuela City and Ninoy Aquino International Airport in Pasay City.

Six out of the 25 total TBMs ordered by the Philippines will be used for the subway’s partial operability section, which will run from Valenzuela to North Avenue in Quezon City.

“Each of these gigantic machines can lay down up to 12 meters of tunnel segments per day, and excavate, daily up to 600 cubic meters of soil,” said Transportation Undersecretary for Railways Timothy John Batan.

Officers from JIM and the Shimizu Corp. in Japan unveiled the TBMs in a virtual demonstration live from Tokyo, Japan, on Saturday.

Transportation Secretary Arthur Tugade said this was an “early Christmas gift” to Filipinos, who may have thought that the subway project had been halted due to the pandemic.

“They are now surprised to see that the first Manila subway [project] is not forgotten, and in fact we continue to work and labor together with our Japanese partners [amid] the pandemic,” said Tugade.

He added that “no COVID-19 can hinder or block us in making sure this dream will come true.”

In March 2018, the government signed a P51-billion loan agreement with the Japan International Cooperation Agency (Jica) to jumpstart the project.

The total cost for the subway is estimated at P393 billion.

During the virtual tour, Japan Ambassador to the Philippines Koji Haneda and Eigo Azukizawa, chief representative of the Jica, both expressed optimism that “there is light at the end of the tunnel” in the upcoming construction of the rail system.

“While it may be incomparable to an actual physical inspection of the TBM production on site, which, unfortunately is quite difficult to do under current circumstances, what we have witnessed today nonetheless proves that the realization of the Metro Manila Subway Project is indeed gaining momentum,” said Azukizawa.

The first-ever subway in the country is expected to partially operate in 2022 and serve 370,000 passengers daily in its first year.

The Department of Transportation (DOTr) hopes all stations will be fully operational by 2026, with a design capacity of 1.5 million passengers per day.

In September 1973, the then Japan Overseas Technical Cooperation Agency (OTCA) conceived the first subway in Metro Manila in its “Urban Transport Study in Manila Metropolitan Area.”

Batan pointed out that as early as the ’70s and ’80s, neighboring countries such as South Korea, Singapore and Taiwan were able to build their own subway systems.

“After nearly half a century and six administrations from the 1973 OTCA study … it is now the Philippines’ turn to finally build our first ever subway, using for the first time not just one, but a fleet of 25 railway TBMs,” the transport official said.

In February, the major parts of a TBM—including the shield jack, cutter reduction gear motor, main bearings and articulation jack—were first revealed by the DOTr.

The groundbreaking ceremony for the subway project was held in February 2019.