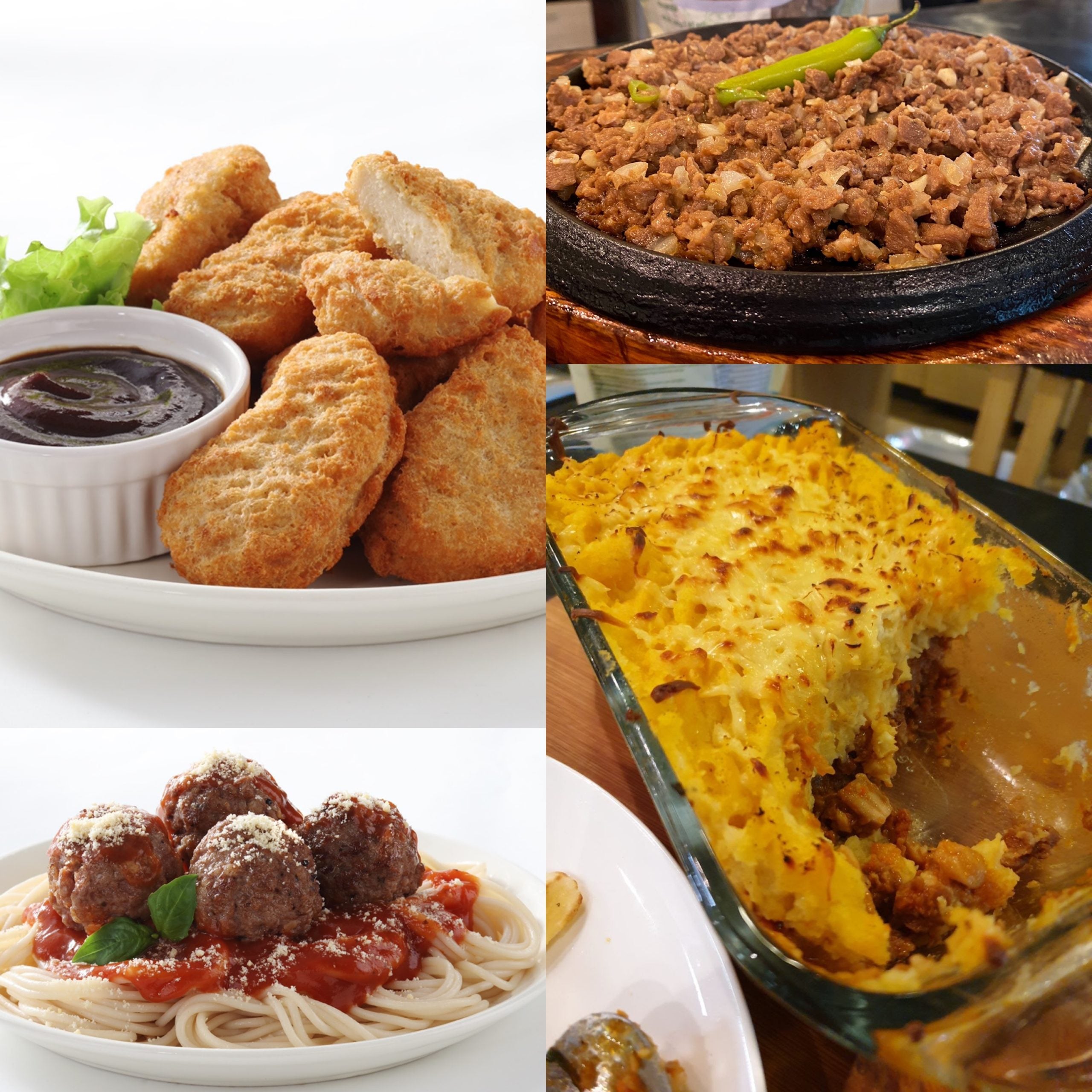 Can you believe all of
these—“sisig,” Shepherd’s
pie—have no meat? They are
100-percent vegan and can
be purchased in precooked
Veega packages!

Last weekend, I got an email from plant-based diet advocate Fr. Anton Pascual, executive director of Caritas Manila, of a copy of the Biz Buzz piece written by business features editor Tina Arceo-Dumlao, juicy with the news that San Miguel Corp. (SMC) has gone vegetarian with a new label called Veega.

So of course I rushed to try it right away.

I have to say, these are fascinating and pretty impressive even if they had no real meat in them.

When I was in college and until 10 years later, way before I became a food writer, I was pescatarian (and just 100 pounds). Even back then, I already hated mock meat. It tasted gummy and “pilit” (forced, unnatural) especially the burgers.I was surprised when I tas­ted the Veega burger patties. It’s no Shake Shack, of course, but douse it with oil and simply fry or grill it and you may be fooled. It is already precooked so there is no need to thaw.

I checked the label and it is made with, among other things, mushrooms, wheat, egg whites as well as textured vegetable protein. It doesn’t even have an aftertaste.

The Veega giniling is ano­ther good one. Some have even made “sisig” with this. It can also work for Shepherd’s Pie.

This one, I will confess, will reveal it’s plant-based after a while of chewing. But the flavors of giniling are decently captured. So don’t give up on it; do continue to enjoy it—just chew fast.

The hotdogs and meatballs are also creatively deceptive. I would happily trade the hotdogs with real hotdogs any day, for a healthier me.

I don’t know if I would ever give up real meatballs, though, but at least now I know what I can eat as replacement during Lent.

The nuggets are tricky because let’s face it, most of us grew up with and love McNuggets. This does not taste like the unhealthy nuggets that we know and love at all. As plant-based nuggets, however, they are quite good in their own right.

You’re good as long as you do not compare.

“This vegetarian line is really for people looking for healthier food options—those who are into, or are trying more plant-based diets. What we’ve noticed is that usually, plant-based food options are either not easily accessible, some are quite expensive and not always suited to Filipino tastes,” says Ramon S. Ang, SMC chief, in the Biz Buzz piece.

Note though that these are not vegan. Some contain eggs.