MerryMart bullish despite pandemic, to introduce drive-thru outlet in 2021 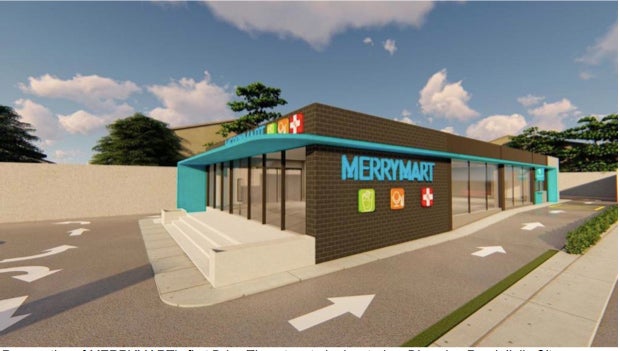 MerryMart plans to open its first drive-thru store in Iloilo City in January 2021.

When businessman Edgar “Injap” Sia II’s MerryMart Consumer Corp. launched its initial public offering a few months ago, it made an unusual pitch to investors.

Apart from significant growth prospects in its bid to become a top supermarket chain, investors were made to consider what its founder achieved in a completely different sector: fast food.

“Mr. Sia intends to leverage the MM (MerryMart) business model on his previous success with the franchising model, through his brainchild, fast food favorite Mang Inasal Philippines Inc.,” according to the company’s prospectus.

It pointed to learnings from growing Mang Inasal, which had over 300 outlets—most of which were franchised—by the time it was sold to Tony Tan Caktiong’s Jollibee Foods Corp. a decade ago.

As it pursues this franchise model as the backbone of its strategy, MerryMart is recasting other innovations from fast food and putting them front and center.

The move will cater to shifting consumer preferences amid the deadly COVID-19 pandemic.

“The MerryMart team continues to decipher and recalibrate its expansion plans as we move forward toward the ‘new normal’ that consumers are adjusting to,” Sia said.

The first drive-thru MerryMart will rise along Diversion Road, beside the St. Joseph School.

Sia said this was a new concept for them and they plan to deploy drive-thru options in “various major thoroughfares.”

Since the sale of Mang Insal, Sia has started other businesses, including DoubleDragon Properties Corp., a venture with Tan.

The developer will build so-called CentralHubs, or modern industrial warehouses, that will rise in all 81 provinces across the Philippines. These will also serve as distribution centers for Merry Mart stores.

Beyond business, this retail format is also personal for Sia, who spent part of his youth helping his parents run a grocery store in 1989 in Capiz. That store continues to serve customers until today, he had said.

MerryMart has three formats. There is the full-size MerryMart Grocery and MerryMart Market, which offers more specialized products and more upscale brands.

Finally, there is the MerryMart Store, a small-format outlet with a three-in-one concept that combines a mini-grocery, personal care shop, and pharmacy.

MerryMart believes the three-in-one format will give it a “first-mover” advantage in the race to reach scale across the Philippines.

MerryMart has nine branches today and is set to open another 17 outlets to end 2020 with 25.

According to the company, it costs P12 to 15 million to franchise a single store. By 2030, it expects around 80 percent of its store network will be franchisees.

It is an aggressive strategy that carries its own risks and rewards.

So far, investors are onboard with Sia on this venture.