Investing in stocks? Why not sneakers? | Inquirer Business

Investing in stocks? Why not sneakers? 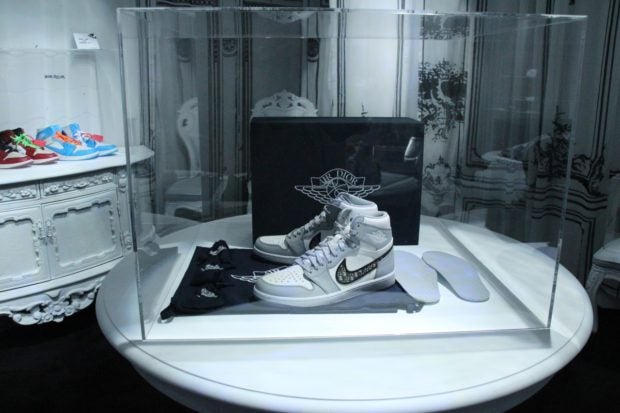 A pair of Air Dior is on display at Kream showroom in Hongdae, Seoul. Air Dior, whose retail price was $2,000, now trades in the resell market as high as $25,000. Lim Jeong-yeo/The Korea Herald/Asia News Network

SEOUL — Even non-sneakerheads are realizing the lucrative nature of sneaker resale these days.

O Jee-ye had never been much interested in expensive shoes. Shoes kissed ground-level microbes. They wore out much quicker than other items of clothing.

What shoes are for, O thought, was for protection. They were good if breathable, durable, didn’t give her blisters and matched the day’s outfit.

It was a shock for O when she learned through a close friend of hers that he easily makes 300,000 won ($250) a time by buying and reselling limited edition sneakers at a margin. That was nearly half her monthly rent in an average neighborhood in Seoul. What’s more, his profits were apparently nowhere near what the truly nimble resellers achieve.

On the websites of sportswear brands Nike and Adidas, a limited number of designs drop unannounced. Within 30 minutes, people scramble to enter their name and shoe size in the hopes of getting a chance to purchase these rare pieces. Those lucky enough chance to buy the shoes either keep them for their personal collection or resell them for a heftier price.

Secondary sales of premium sneakers have recorded up to 1,000 percent returns. For example, the Off-White Air Jordan 1 “White” launched by Nike at a retail price of $190 in 2018, generally trades around $2,000 in the secondary market.

Some of the most highly sought-after designs are classic Air Jordans and Kanye West’s Yeezy sneakers, made in collaboration with Adidas.

Star collaborations, country-specific releases and cross-brand projects work like magic. In November 2019, Big Bang’s G-Dragon collaborated with Nike to launch the Air Force 1 Para-Noise. The iconic Nike swoosh on these shoes came in three colors — the original white, the limited red and the yellow reserved for G-Dragon’s friends.

Only 818 pairs of G-Dragon Nikes with the red logos were released. Their retail price was 219,000 won. Now they trade for around 3 million won. As for the pairs featuring the yellow logo, of which there are only 88 in the world, the price can reach up to 20 million won, according to reports.

So why are people so hung up on these incredibly expensive, secondhand (but unworn) kicks? 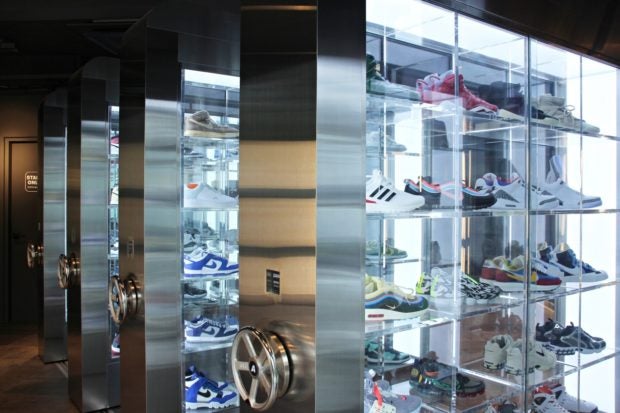 Naver Snow’s Kream showroom in Hongdae, Seoul, where the company has some 300 pairs of premium limited sneakers on display. Kicks here are not for sale. Lim Jeong-yeo/The Korea Herald/Asia News Network

The culture of sneaker collecting is closely tied to the cultures of basketball and skateboarding. It dates back to the 1980s, when Michael Jordan emerged as an icon in the sports industry. His eponymous sneaker brand Air Jordan, launched 1984, became a status symbol for fans.

According to US investment bank Cowen & Co.’s estimations in 2019, the sneaker resale market, valued at $2 billion that year, was projected to become a $6 billion business globally by 2025.

A prime example of how hot the trend is the American sneaker reselling platform StockX, which became a unicorn company in 2019, a remarkable growth since its foundation in 2015. A unicorn company refers to a startup that is valued at $1 billion.

StockX is not the only such player in the US. GOAT, Flight Club, Grailed — the list goes on. There are similar players in Europe and China, all of whom are starting to ship overseas, too.

Korea is not exempt to the phenomenon. From as early as the dot-com bubble, hard-to-come-by sneakers traded hands here between strangers through the local versions of Craigslist at great premiums.

These transactions were not without risks. Beguiled sneaker enthusiasts were sometimes misled to pay unreasonable rates for a pair of counterfeit shoes.

The aforementioned StockX in the US and others attempt to cut out that uncertainty factor from premium sneakers reselling. When a buyer and seller want strike a deal, these internet platforms offer an authentication service in the middle to catch any replicas pretending to be original. At the same time, the price of the final deal is shared for others to use as a reference point. The companies also deliver.

In order to provide reliable hands, eyes and feet for the transaction, StockX takes a 10 percent fee from every transaction. If the seller elevates in level within StockX, the charge drops in proportion.

In Korea, five such platforms are currently pitted against each other.

The competition is noticeably heating up in 2020, with two of the five launching this year and the other two making milestone announcements.

In March, without forewarning, information technology company Naver’s imaginative photo app Snow launched a sneaker resale app called Kream. Kream is an acronym of “Kicks Rule Everything Around Me,” taking inspiration from the title of a song by New York rappers Wu-Tang Clan.

This is not an unlikely pairing of businesses because Snow frequently launches new services targeting millennials and Generation Z, a Naver official explained to The Korea Herald.

Armed with an IT parent, Kream boasts an intuitive interface that has immediately drawn users. Users can also trade anonymously using Kream.

Within the industry, Kream is seen as having overtaken the three preexisting rivals as the top sneaker reselling platform in Korea, but it has recently seen a new competitor jump into the market.

Online fashion select shop Musinsa’s Soldout threw down the gauntlet when it launched in July.

If Naver is flexing its software prowess through Kream, Musinsa is leveraging its position in the fashion business for Soldout. Musinsa has its origins in an online café known as “Mujinjang Sinbal Sajin Maneun Got” — meaning “A place of inexhaustible shoe photos.”

Soldout has a strong community of young fashion fanatics who had already been exchanging their limited edition kicks via the Musinsa platform.

The addition of Kream and Soldout are prompting the existing platforms Outofstock, frog and Xxblue to announce fresh strategies to retain users.

Outofstock most recently announced it would work with Lotte Department Store to strengthen its distributing network and outreach for the next three years. Outofstock launched in November 2018 and is the first Korean sneaker resale platform. In the first half of 2020, the company made a revenue of 5 billion won.

Xxblue, a subunit of the auction house SeoulAuction Blue, is providing a differentiated offline shopping opportunity in Sinsa-dong, Seoul. Sneakerheads can saunter in to try on limited edition kicks and purchase them on the spot.

An Xxblue official told The Korea Herald that the company categorizes sneakers as collectibles that hold cultural value, so it is not strange for an arts dealer business to spin-off a sneakers trading platform.

O is now a member of the Nike official website. Every now and then when Nike drops a limited edition lucky-draw event, O tries her luck for the most common men’s size. She’s not going to wear them herself, but she knows there are many out there who would offer a good price.

True sneakerheads may scowl at O for driving up the competition and adding fuel to the market that is already overheated.

The same could be said of the original brand names who don’t make as much out of these highly desired goods as the resellers do.

So far, Nike or Adidas have made no moves to sanction the secondary market but rumors are that they may try to work in partnership with resale platforms.