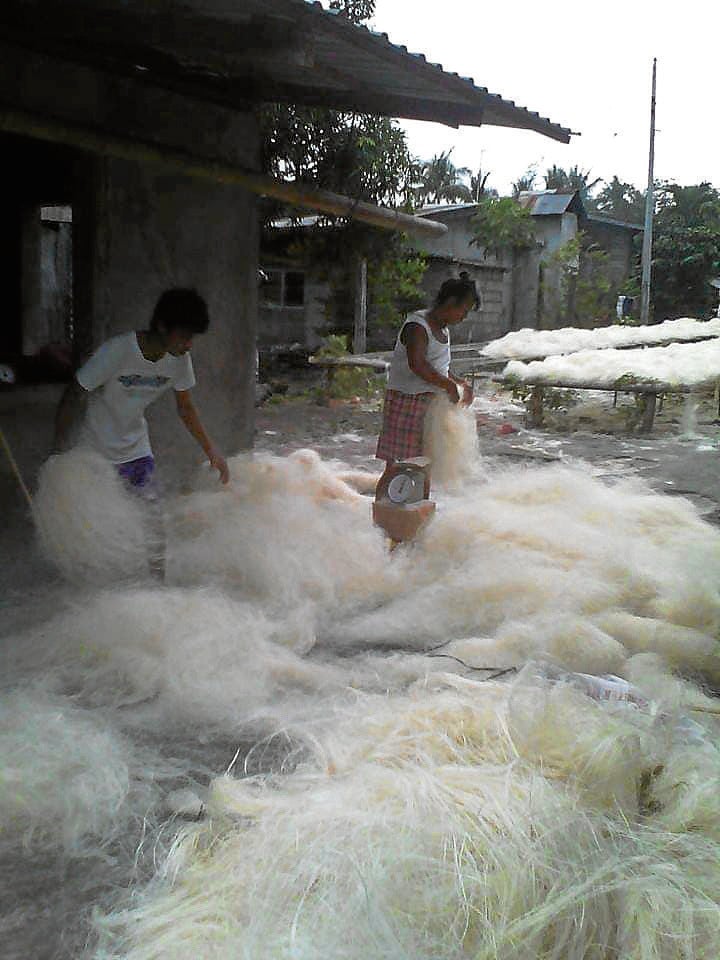 Abaca is used to make sinamay (scrunch mats) and other packaging materials in Agoncillo, Batangas province.

A lakeshore community in Agoncillo, Batangas, had finished the last batches of scrunch mats for export when Taal Volcano unleashed tons of ash in a steam-driven eruption in January. Although they were able to pack and seal the finished products, they had to leave them behind in a warehouse that was covered in ash, as residents rushed to flee from a restive volcano.

The scrunch mats, popularly called the sinamay, are made of abaca, an indigenous fiber, often used as packaging materials for flower bouquets or wine bottles or as home decors.

When the lockdown was lifted and residents allowed back into restricted zones, the abaca products were finally shipped out to Portugal, but some of the raw materials were buried or lost in the ash pile.

The Taal eruption was just one of the “calamities” that struck Agoncillo’s handicraft makers, a cottage industry that entrepreneur Carina Villalobos, 56, considered more of a social enterprise than a profit-driven business.

Like many other industries in Batangas, it hasn’t completely bounced back when the Philippines had to face the economic impact of the new coronavirus disease (COVID-19) pandemic that disrupted global supply chains.

Export was restricted, trade expos put off, and orders for locally made products canceled. Manufacture of handicrafts, considered nonessential during a health crisis, is at a standstill.

“Many times I’ve wanted to give up on this, but I always thought about the social responsibility to the people,” Villalobos said in a recent phone interview.

With 22 years of experience in marketing Philippine handicraft, Villalobos in 2006 used her retirement money to buy a piece of property in her husband’s hometown of Agoncillo and start the business.

They initially had three workers until they were able to employ as much as 90, all of them from Barangay Adia and neighboring villages.

They had clients in Germany, London, Turkey and Russia and shipped truckloads of abaca products weekly during the peak years.

“When we came [to Agoncillo in 2006], the people, most of them my husband’s distant relatives, didn’t have jobs. We just figured a way how to make the community productive,” Villalobos said.

Abaca, which comes from the Musa textilis plant, has been in the market for many decades with the Philippines among the top global exporters of the natural fiber.

At one point, Villalobos said they tried to grow abaca in Agoncillo but the soil and weather condition were unfavorable for the crop.

Villalobos said they would import the raw fiber from Bicol region, host to the largest abaca plantations in the Philippines.

The Agoncillo workers milled, stiffened and dyed the abaca fiber into colorful mats, each one of them earning an average of P5,000 a week.

“Some were able to build their own homes for their families or support their children in finding jobs overseas through this business,” Villalobos said.

But orders for the handicraft began to dwindle in 2008 due to the global recession. Other countries like India, Vietnam and Taiwan also learned the trade and began producing handicraft from other materials like wrought iron, terracotta and ceramics, of which the Philippines used to be a producer, Villalobos said.

By 2016, the Agoncillo makers had to temporarily stop production.

“We just tried to stay afloat,” Villalobos recalled, to the point she had to sell her vehicles to keep the business running.

Villalobos said she was aiming for a fresh start when they reopened in 2019, after a former client placed a bulk order for the abaca products.

With a handful of workers left after some moved or found jobs elsewhere when they closed shop and after the Taal eruption, she said they were eyeing to make abaca face masks this time, as the global demand for protective gear against the virus rises.

In these trying times, Villalobos said all the workers could do was to be “resourceful” to save a dying trade and a community it had sustained.