HONG KONG, China – Asian markets mostly fell Monday with sentiment depressed by a spike in coronavirus infections that has forced fresh lockdowns and sparked worries about the impact on the world economy. 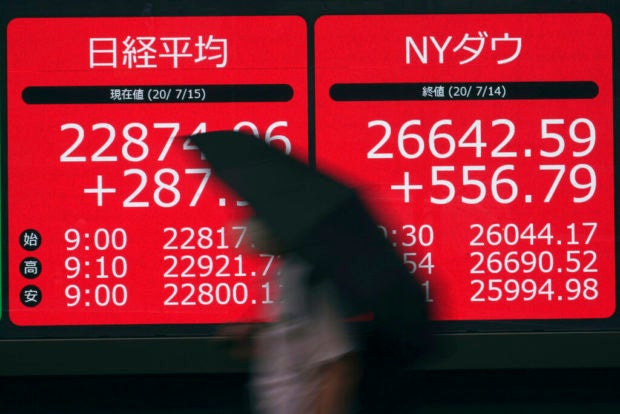 A lack of substantial progress by US lawmakers on a new stimulus package is also frustrating traders, while China-US tensions continued as the White House considers measures against Chinese tech firms, citing national security.

Australia’s Victoria state imposed fresh, sweeping restrictions Sunday, including a curfew in Melbourne for the next six weeks, a ban on wedding gatherings, and an order that schools and universities go back online in the coming days.

Britain imposed new measures in several northern counties at the end of last week, while there are reports the government is considering fresh moves to avert another economically painful national lockdown, including sealing off London.

The new wave of infections has fanned fears that a nascent economic recovery will be knocked off track.

“There is going to be a recovery — we shouldn’t lose track of that as we go through this period,” Anne Anderson, of UBS Asset Management Australia, told Bloomberg TV.

“But returning to where we were before we started is going to be a real challenge and is going to require ongoing monetary and fiscal support. It’s a long way out of here, unfortunately.”

In early trade, Japan’s Nikkei 225 rose 1.9 percent as investors picked up cheap stocks following a steep drop last week, while there was also some cheer in data showing the country’s economy contracted less than first thought in January-March.

Sydney edged up slightly despite the new lockdowns in Victoria.

– Congress at loggerheads –
However, Hong Kong shed more than one percent as the city continues to see more than 100 infections a day, forcing authorities to put ever-tighter measures in place, while Singapore and Taipei were each off around one percent.

Manila tanked more than three percent after the government said it would shut down the capital and nearby provinces for 15 days after a surge in cases.

But AxiCorp’s Stephen Innes said: “It’s Monday and risk usually starts lousy after investors weekend-soak in COVID-19 headlines then turn better, so we could see a bit of a recovery from here.”

In Washington, Democrats and Republicans remain miles away from an agreement on a new stimulus bill, even after supplemental unemployment benefits credited with boosting consumption despite soaring joblessness expired at the end of last week.

“Now around 30 million Americans face the prospect of no income support, harming the US recovery, which was already showing signs of losing momentum.”

Adding to the unease on trading floors is Secretary of State Mike Pompeo’s warning that the White House will unveil measures against “a broad array” of Chinese-owned software.

He said TikTok and other Chinese software companies operating in the US, such as WeChat, feed personal data on American citizens directly to the Chinese Communist Party.

The move would add to a long list of issues that have seen the economic superpowers butt heads — including Hong Kong, Huawei and coronavirus — and fan concerns about a possible renewal of their trade war.