Fate of Naia rehab plan hangs in the balance 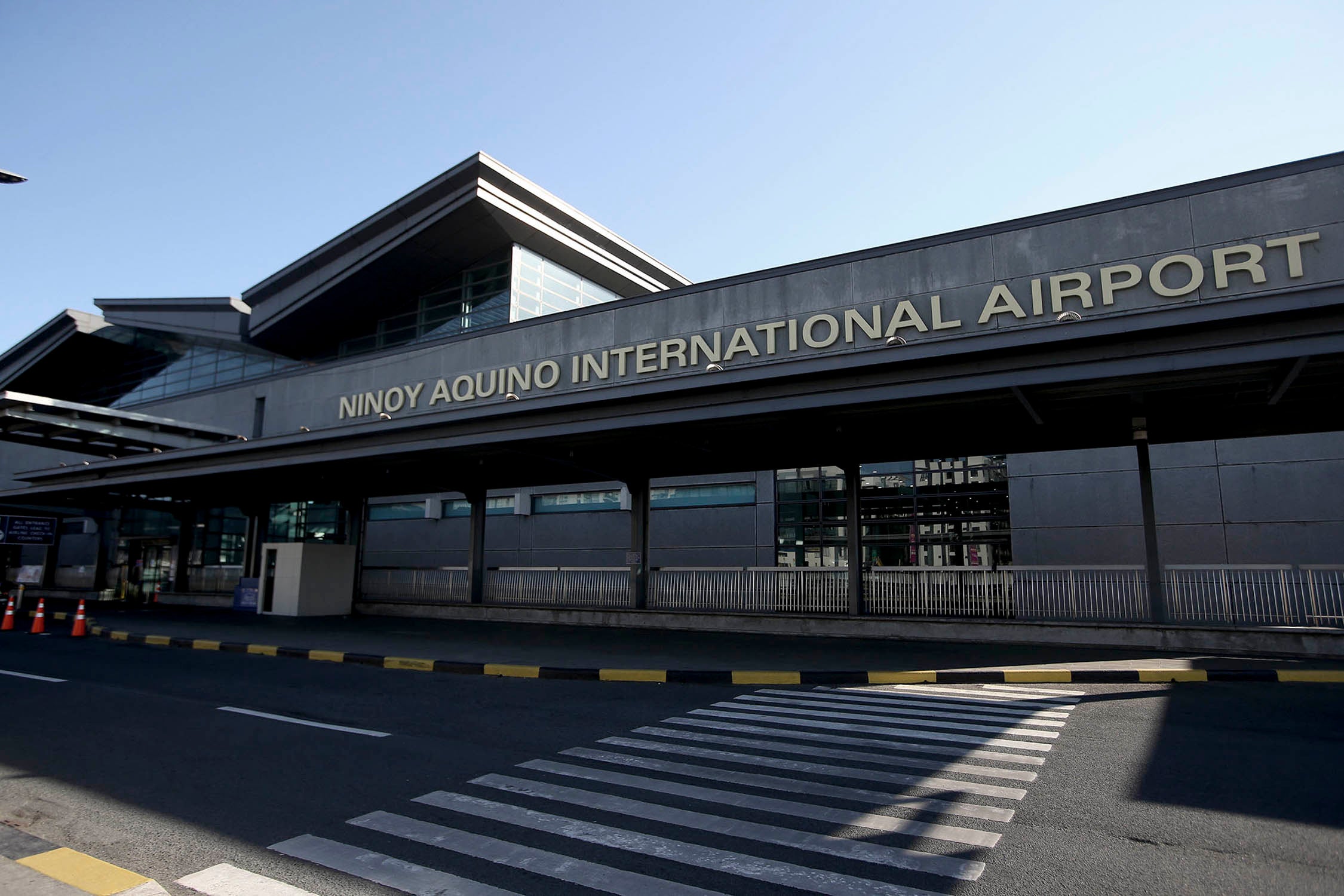 The COVID-19 pandemic has moved government attention away from immediately deciding on the fate of the country’s main international gateway. —RICHARD A. REYES

Years before the COVID-19 pandemic reshaped the aviation sector, the Philippine government was battling a different crisis: the worsening congestion in Metro Manila.

As land travel around the capital district slowed to a crawl—a consequence of ageing mass transport systems and short-sighted policies that failed to keep pace with economic realities—so, too, did traffic in the skies around Manila’s Ninoy Aquino International Airport (Naia).

More than the frustrating delays for passengers waiting for their flights, the wasted time resulted in billions of pesos in economic losses per year.

The COVID-19 crisis has rendered the problem of aviation congestion dormant.

But the environment also presents an opportunity for the government to support meaningful upgrades for Naia and other infrastructure projects, said Jose Reverente, a previous spokesperson for Naia Consortium, which recently dropped its massive offer to upgrade Naia.

“Now is the perfect time to rehabilitate Naia while it’s not being utilized as much,” Reverente told the Inquirer.

When the Duterte administration assumed power, drastic solutions were needed to address the country’s infrastructure gap. With the government’s blessing, unsolicited projects from the private sector emerged.

While conglomerate San Miguel Corp. (SMC) saw the answer through a massive “aerotropolis” in Bulacan northwest of Manila, an alliance of seven of the country’s largest business groups believed Naia should remain the country’s premier gateway and focused efforts there.

They became the Naia Consortium but many would call it the super consortium given the sheer size and resources of its tycoon members.

After two years of hard negotiations, even this bold enterprise would collapse on July 7. Banks were reluctant to lend money because of the government’s steep terms and the devastation brought about by the health crisis.

Eyes are now on talks with Megawide Construction Corp. and India’s GMR Infrastructure Ltd., the consortium that is next in line.

The outcome of these negotiations will determine more than the fate of Naia, which some quarters believe should be closed down in the next decade to make way for a newer gateway outside Metro Manila.

It will have broader implications for the Duterte administration’s “Build, Build, Build,” infrastructure program, which now requires more private sector support as the pandemic divides government spending priorities while the economy plunges into recession.

“The government needs the private sector now that it’s burdened with other things,” Jonathan Ravelas, head of strategy at BDO Unibank Inc., told the Inquirer.

“In a situation like this, they might want to give sweeteners to encourage more private sector participation,” he said.

Early into the Duterte administration, Transportation Secretary Arthur Tugade said they would entertain unsolicited proposals so long as these contained no guarantees of any kind.

At a development cost of P102 billion, Naia Consortium’s proposal was the second-largest unsolicited project in the Build, Build, Build behind SMC’s P735-billion New Manila International Airport in Bulacan province.

The private sector proposals accounted for over a quarter of the administration’s P4-trillion pipeline of 100 flagship projects. The list was revised last year to remove nonviable projects but also to include these unsolicited offers, which will be built without any government money.

A day after Naia Consortium’s bid was dropped, Finance Secretary Carlos Dominguez III, who previously aired distrust over certain public private partnerships (PPPs) being disadvantageous to the government, said they were now open to project tweaks amid the pandemic.

Investors are looking at the Naia talks and other big-ticket projects for clues on how far this government will go in accommodating private investments.

After all, a host of factors led to the failure of negotiations between Naia Consortium and the government with the COVID-19 pandemic being the final deal breaker, multiple sources privy to discussion told the Inquirer.

There was the length of negotiations, the government’s unyielding belief private sector should bear more risk given the strong economy and the evolving and divergent views among members on the project’s viability, they said.

Naia Consortium’s members were no lightweights in the business sector. 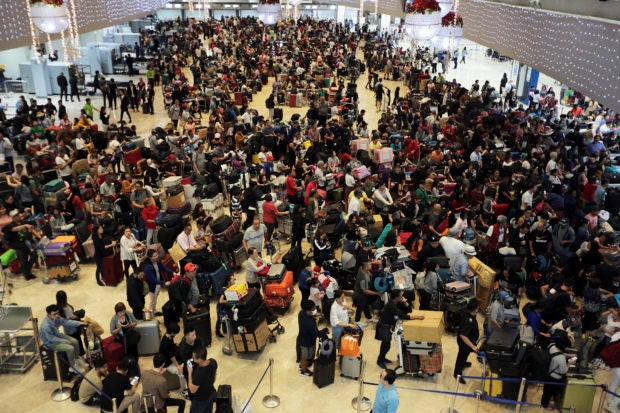 In this photo taken on Jan. 13, departing passengers at Ninoy Aquino International Airport (Naia) Terminal 1 line up at their respective check-in counters as the terminal resumes partial operations after the Taal Volcano eruption. The chronic congestion at Naia has caused billions of pesos in economic losses. —GRIG C. MONTEGRANDE

The combined value of their companies topped P2 trillion at the time. Their technical partner is Singapore’s Changi Airports International.

With the Duterte administration set to end by 2022, the fate of Naia Consortium serves as a cautionary tale on how the private sector, even a super consortium, could be pushed to throw in the towel, ultimately, at the expense of better infrastructure for the public.

The problems in Naia have been brewing for years.

By the time President Duterte assumed power in 2016, the nearly 40-year-old gateway had overshot its design capacity of 31 million passengers per year by a few million.

Naia occupies a sprawling 650-hectare property straddling the cities of Parañaque and Pasay.

It is a convenient gateway for residents of Metro Manila and its proximity to important business districts. Years of commercial and residential development around the airport, however, ensured it would have limited opportunities for expansion.

The last Aquino administration abandoned a proposal to build a third runway in Naia since it would touch a major highway and force the government to expropriate land from a nearby residential community.

Naia’s last major expansion was the 2008 opening of Naia Terminal 3, a project that was completed years earlier but mothballed due to corruption allegations.

While Naia Consortium submitted its offer on Feb. 12, 2018, the plan was hatched months prior during a meeting between the government and the country’s business elite.

During that meeting, it was agreed a better gateway serving Manila was needed to help the government achieve its economic goals.

More importantly for those at the gathering, it was a clear signal the Duterte administration was open to the private sector, many of whom felt sidelined when PPP funding sources were shifted to overseas loans—deemed faster at the time.

Not everyone who was invited made it to the list of the final seven.

One source privy to talks said the billionaire Sy family behind the SM Group was invited to join. But they politely declined, saying they would prefer to focus on their core expertise and instead support the project as lenders through their banks.

Naia Consortium was formed, in part, because of the shared belief Naia must remain the Philippines’ primary gateway.

Months before their meeting, SMC had secured crucial government recognition for its New Manila International Airport in Bulacan. The project will transform thousands of hectares of wetlands into a powerful new economic hub.

Naia Consortium also moved up the timetable for the submission of its proposal by several months after getting wind that a rival group was preparing to bid for Naia.

The various planning teams of the member conglomerates put their heads together and worked through the 2017 holiday season.

True enough, Megawide-GMR, the operator of the Mactan Cebu International Airport, made a rival bid mere weeks after Naia Consortium. Under the government’s bidding rules, unsolicited offers will be entertained on a first come, first served basis.

Naia Consortium faced numerous other challenges. In 2018, it was forced to revise its offer for a massive P350 billion Naia upgrade that included a new runway and a 35-year concession.

This was shortened to a 15-year concession with still significant improvements to Naia’s capacity and flights.

But negotiations would get more difficult from there. Major discussions involved the removal of automatic increases in passenger terminal fees and the conditions that will trigger a material adverse government action (Maga).

Maga is an important provision since it serves as protection for the private sector considering the long-term nature of these contracts.

The Duterte government did not want to guarantee the impact of any change in future laws, allowing the application of Maga on executive orders. This was flagged as a significant risk.

The government’s stance was strengthened by some of Naia Consortium’s own members.

A venture led by JG Summit Holdings and Filinvest Development Corp. accepted similar terms as it bagged the 25-year contract to operate the Clark International Airport in Pampanga province at the start of 2019.After this, the government demanded that all other private sector proponents to adopt terms similar to the Clark airport contract, which would serve as a template.

In February, a unit of the Lucio Tan Group partnered with state-run China Communications Construction Co. for the Cavite government’s $10-billion proposed air hub in Sangley Point southwest of Manila.

Other conditions from MIAA put added pressure on the consortium.

MIAA rejected Naia Consortium’s bus system that would link all terminals, preferring instead a more expensive train system, while requiring the group to retain all of the government’s airport employees.

It also told the consortium to potentially shoulder billions of pesos in real property taxes over the sprawling complex.

Metro Pacific warned this would eat up more than 50 percent of their expected return over the concession period.

When it became clear MIAA would not back down, Metro Pacific announced its withdrawal from the consortium on March 9. Metro Pacific was the only “pure infrastructure” member of the consortium and could not generate indirect value like its partners with businesses in airlines or vast real estate holdings.

The withdrawal came mere days before major cities around the Philippines went under lockdown to stop the spread of COVID-19.

And while Naia Consortium continued for a few more months before calling it quits in July, the Duterte administration has failed to stem the steep rise in infections, ensuring the slow recovery of aviation and the broader Philippine economy.

What’s next for Naia?

The administration has not announced any major plans for Naia or building other new gateways, leaving this to the private sector.

While delayed by the pandemic, SMC said the Cavite government said their respective airport plans will push through.

For BDO’s Ravelas, Mr. Duterte’s economic managers should provide guidance on infrastructure priorities in their remaining years in power considering the disruptive impact of the pandemic.

“You have high numbers of infections. That’s not going to generate positive consumer and business sentiments. You need to flatten the curve,” he said.

“The question investors are asking is: will there be a change in the infrastructure program? Are we still going to focus on agriculture, tourism and manufacturing or do we improve healthcare, build more hospitals?,” he said.

“Everyone is just waiting for what the new direction will look like,” Ravelas said.

Knowing COVID-19 was at their door, family of 8 planned strategy to fight it