NEW YORK  — Most of Wall Street stumbled Thursday, but yet another rise for big technology stocks helped keep the market’s losses in check. 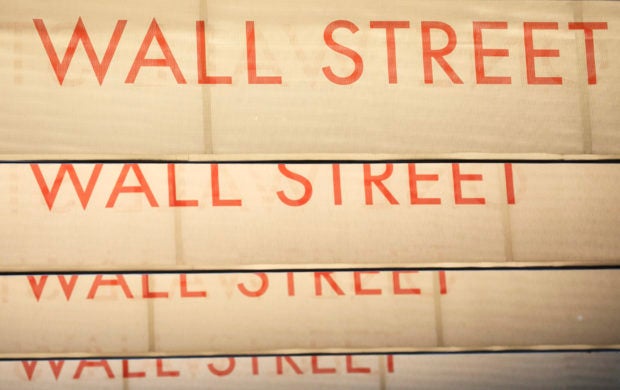 Signs for Wall Street are shown, Thursday, July 30, 2020, in New York. Stocks are falling on Wall Street Thursday after reports showed that layoffs are continuing at a stubborn pace and that the U.S. economy contracted at a nearly 33% annual rate in the spring. (AP Photo/Mark Lennihan)

Among the hardest-hit were oil producers, banks and other companies that most need the economy to pull out of its recession. Treasury yields also sank in a sign of increased pessimism about the economy.

Stronger-than-expected profit reports from UPS and other companies helped the market trim its losses through the day.

So did steadying prices for Amazon and other big tech-oriented stocks, which reported their own results after the day’s trading ended.

Anticipation for their reports, which proved to be even better than Wall Street expected, helped the Nasdaq composite completely erase its early loss and climb 44.87, or 0.4%, to end the day at 10,587.81.

The jumbled trading came after a report showed that layoffs are continuing at their stubborn pace across the country, denting hopes that the economy can recover nearly as quickly as it plummeted into recession.

A separate report on Thursday showed that the U.S. economy contracted at a nearly 33% annual rate in the spring, the worst quarter on record.

Markets worldwide had already turned lower before those data releases dropped. An earlier report showed that Germany’s economy, Europe’s largest, suffered through its worst quarter on record during the spring.

Investors had already been expecting the reports on the economy to be weak, “so the real story today for traders is earnings,” said Chris Larkin, managing director of trading and investment product at E-Trade Financial.

Thursday was the busiest day for profit reports among S&P 500 companies within the busiest week this earnings season.

Earnings reports have mostly been better than Wall Street’s expectations so far, but they’ve been far below year-ago levels, before the pandemic struck.

The big companies in the S&P 500 are on track to report a nearly 38% drop for the second quarter from a year earlier, according to FactSet.

Energy stocks had some of the market’s sharpest losses, dropping in concert with oil prices amid worries about a weaker economy. Exxon Mobil dropped 4.9%, and ConocoPhillips lost 5.8%.

Financial stocks were also weak, hurt by a drop in interest rates that reins in the profits to be made from lending. JPMorgan Chase fell 2.7%, and Citigroup lost 3.1%

On the winning end was UPS, which jumped 14.4% to a record high after reporting revenue and profits for the spring that blew past analysts’ expectations. It benefited from more people getting deliveries at home amid the pandemic.

Qualcomm rose 15.2% after it also reported stronger-than-expected quarterly results, while announcing it had resolved a dispute with Huawei and signed a new license agreement.

Shortly after trading ended for the day, Amazon, Apple, Facebook and Google’s parent company all reported bigger profits for the latest quarter than Wall Street had forecast. Apple also announced a 4-for-1 stock split.

Investors have continued to flock to them on expectations that their growth will only continue as the pandemic accelerates life’s shift toward online. Their huge size also gives their stocks’ movements great sway over index funds: The four alone account for nearly 16% of the S&P 500 by market value.

Investors are also continuing to wait for signs of progress from Capitol Hill, where Congress is debating how and whether to offer more aid for the economy ravaged by the pandemic.

An extra $600 in weekly unemployment benefits from the federal government is about to expire, and that cash is growing in importance as the number of laid-off workers ticks higher.

A little more than 1.4 million U.S. workers applied for unemployment benefits last week, according to a Thursday report from the Labor Department. That’s up by 12,000 from a week earlier.

Thursday’s loss for the S&P 500 gave back some of its big gain from the day before, when the Federal Reserve pledged to keep interest rates at their record low but highlighted how uncertain the path is for the economy due to the pandemic. It was the second time that the index has flip-flopped on consecutive days this week.

The yield on the 10-year Treasury fell to 0.55% from 0.58% late Wednesday. It tends to move with investors’ expectations for the economy and inflation.