NEW YORK  — Wall Street rallied on Wednesday, and the S&P 500 climbed 1.2% for its best day in two weeks after the Federal Reserve kept the accelerator floored on its support for the economy. 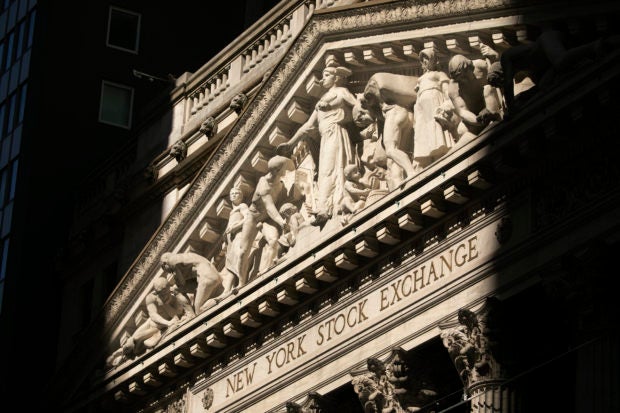 The New York Stock Exchange is shown, Tuesday, July 21, 2020. Stocks are holding on to their gains, Wednesday, July 29, on Wall Street after the Federal Reserve said it will keep the accelerator floored on its aid for the economy. (AP Photo/Mark Lennihan)

U.S. stocks began rising as soon as trading opened, and momentum picked up after the Fed said in the afternoon that it will keep interest rates at their record low as the economy struggles through the recession created by the coronavirus pandemic.

Besides keeping short-term rates pinned at nearly zero, the Federal Reserve also said it will continue to buy about $120 billion in Treasury and mortgage bonds each month to support the economy.

“The Fed has done a lot,” said Kirk Hartman, president and global chief investment officer at Wells Fargo Asset Management. “It was very clear today that they’ll stand by and continue to be accommodative.”

Such aid from the Fed, along with stimulus from Congress, helped launch the stock market’s turnaround in March. Congress is also locked in negotiations for more support for the economy, with $600 in weekly unemployment benefits about to expire.

Democrats and Republicans seem to remain far apart in their proposals, but investors are still hopeful about a deal’s chances.
If those two remain in hand, the big wild card for markets will continue to be the coronavirus pandemic and whether a vaccine can be developed for it within the next year.

“The markets are very strong, but the real economy is not so strong,” Hartman said. “The markets are betting on a recovery, on a vaccine rolling out at the end of the year. That’s the only way you can justify the market” at the levels it’s reached, along with the continued rescue efforts by the Federal Reserve.

Besides the action in Washington, this is also a frenetic week for profit reports from the biggest U.S. companies. Several reported results for the spring that topped Wall Street’s expectations, even though they were far below last year’s levels from before the pandemic.

That’s been the general trend so far this earnings season, with 40% of companies in the S&P 500 having reported.

Advanced Micro Devices rose 12.5% after it reported a stronger jump in profit for its latest quarter than Wall Street expected.

The chip maker also raised its forecast for revenue through 2020. It’s notable because many companies have been pulling their forecasts or declining to offer any given all the uncertainty in the economy created by the pandemic.

Starbucks gained 3.7% after it reported a loss for the spring that wasn’t as bad as analysts were expecting.

L Brands, the parent company of Victoria’s Secret, soared 35.4% for the biggest gain in the S&P 500 after it laid out plans to slash its annual costs by $400 million, including through laying off workers. The stock had been struggling for years before turning higher in the spring, and analysts say the cost cuts should help bolster the company’s profitability.

Eastman Kodak’s stock more than tripled for the second straight day after the company won a $765 million government loan to launch a new business unit making pharmaceutical components. It surged 318.1% to $33.20, up from $2.62 on Monday.
Big technology CEOs, meanwhile, testified at a House of Representatives subcommittee hearing on whether their companies have grown too big and harm competition.

Amazon, Apple, Facebook and Google’s parent company have been some of the market’s strongest stocks through the pandemic, much as they’ve been for the last several years, on investors’ expectations that they can continue to grow almost regardless of what the economy does.

Their stocks have grown so valuable that they can sway the S&P 500 and other indexes almost by themselves. Those four, plus Microsoft, account for nearly 22% of the S&P 500’s total value.

The big tech-oriented stocks have had a few stumbles in recent weeks, but they remain far ahead of the rest of the market. Amazon added 1.1% Wednesday, Apple rose 1.9%, Facebook gained 1.4% and the Class A shares of Alphabet were up 1.3%.
The yield on the 10-year Treasury dipped to 0.57% from 0.58% late Tuesday.