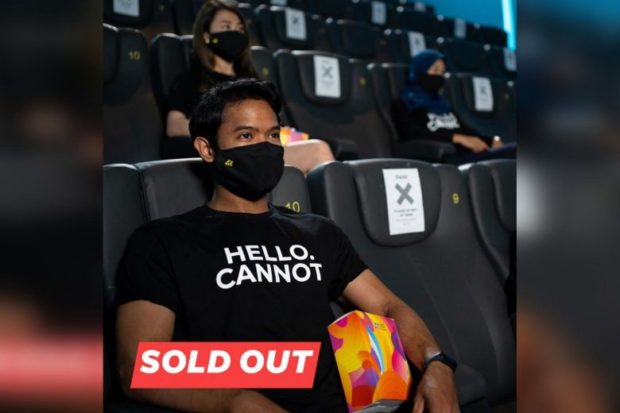 KUALA LUMPUR — When cinemas were given the green light to reopen, many wondered if cuddling on date night would be allowed after Malaysia decided to ease the movement curbs.

Golden Screen Cinemas (GSC) quickly responded to this and other burning questions, but with a humorous twist, which resulted in its post going viral.

“Finally I can own both the hand rest cushions,” said Facebook user Colin Hwang, responding to the enforcement of social distancing in the cinema.

Facebook user Dinish Rajendran expressed his frustration at not being able to sit next to his date. “If this happened last year… so happy to watch alone. But now I couple ready (sic),” he said.

The multiplex cinema operator later launched a limited-edition T-shirt with the quotes that sold over 500 pieces on its official store in Lazada within 1½ hours of opening.

Other companies are also employing novel ways to earn the visit of potential customers as Malaysia takes gradual steps to reopen the economy, with many Malaysians still worried about coronavirus infections in public places.

Instead of putting up the usual advertisements about the cheapest products or the latest movies, some businesses are using various social media channels to portray themselves as cool establishments, while injecting healthcare guidelines in their messaging.

The 64-year old boss of Malaysia’s biggest supermarket chain Mydin could be seen juggling with onions in one TikTok video and doing jigs in others, as he tries to entice his audience to visit his 68 outlets nationwide.

“Our goal was to find a way to amuse our audiences and make them remember our messages. So it was the most opportune time to go into a strategy like this because everyone was at home and would definitely be on their gadgets,” Datuk Ameer Ali Mydin was quoted as saying on June 26 by news site Malay Mail Online.

During the first phase of the movement control order, Malaysians were banned from leaving their homes unless buying essential items like groceries and medicine.

On May 4, the movement curbs were relaxed, allowing most businesses to reopen, while cinemas were given the nod to operate on July 1.

“I’m buying Domino’s this weekend just because of this ad,” said one post on its Facebook page, commenting on the advertisement.

A total of 8,601 patients have been discharged, with an overall recovery rate of 96.6 percent.

Even as most companies are still trying to find their feet in the changed business environment, Ms Low from GSC hopes that with the low infection rate in Malaysia, cinemas will eventually be allowed to open to full capacity, which will help in their recovery.

Cinema halls are only allowed to fill up to 50 percent of their capacity now.

“We are confident that once the movie supply is restored, customers will return to the cinemas,” she said.

Asked if he dares to watch the movie without a friend sitting next to him, avid moviegoer Ahmad Luqman Ihsan said: “I’m afraid my mask would soon be positioned to cover my eyes instead.”