It’s once again that all too familiar feeling of being stuck at home. All right, I concede. We are not completely stuck at home, as we are actually able to go out to get more than just our essentials. We can dine in and shop a bit, in the hope of keeping the economy moving.

But as staying home is truly the norm, I’m finding time to do the things I didn’t do much of during the “normal” days. One of those would be deleting from the hundreds of digital photos in my albums. While I’m not an overly trigger-happy photographer, my albums are actually a consolidation of the many photos taken not only by myself, but also by family, relatives and friends during our get-togethers and travels—hence, tens of thousands, in bursts of smiles and color.

I was looking through photos of a trip to Morocco I did last February, scrutinizing the details of one quaint boutique hotel I had the chance to spend some time in. And since we’re all not traveling, let me share this architectural design experience with you. 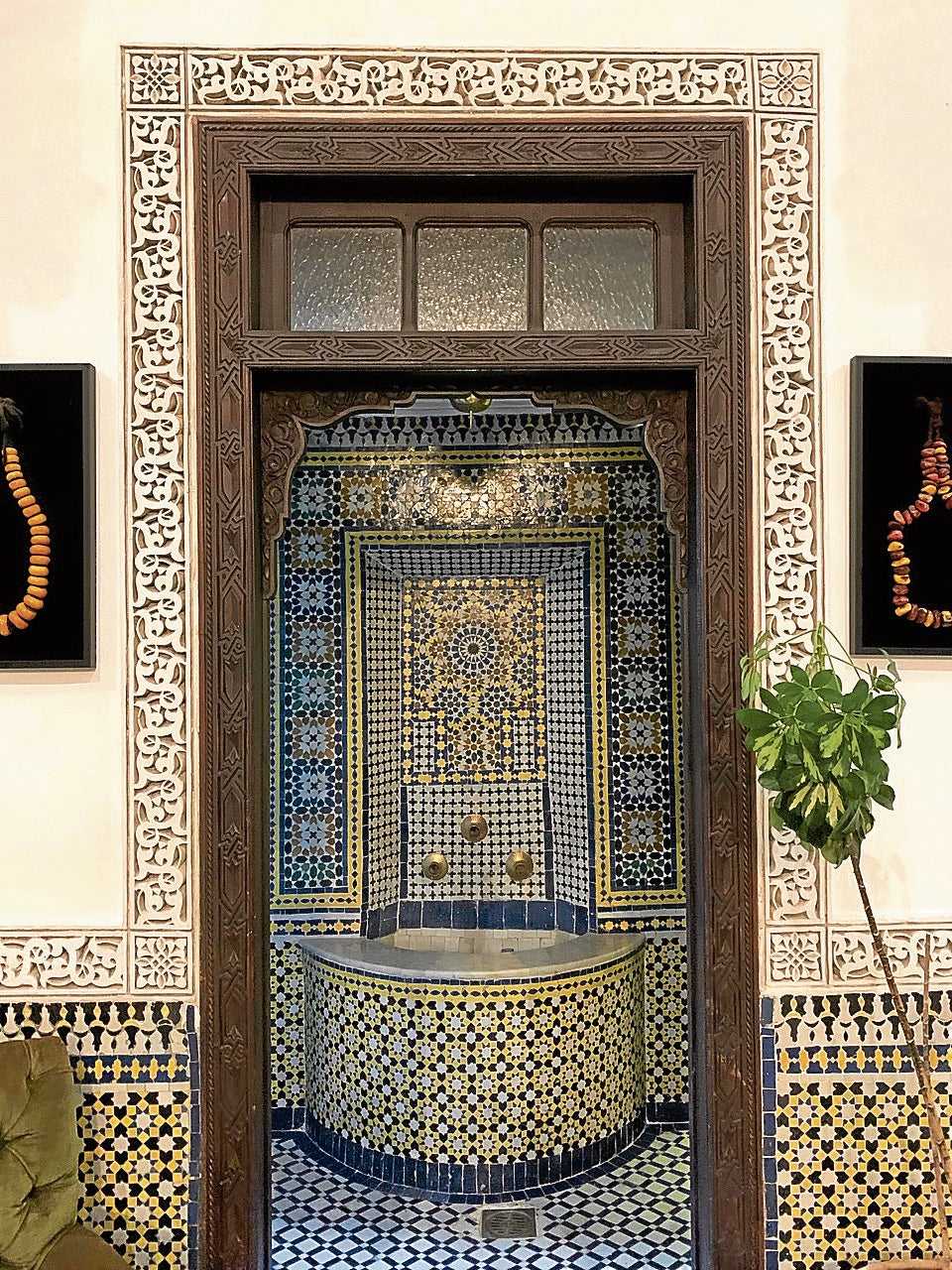 I did a little adventure then, traveling from Marrakesh to Fes by car, and visiting many of the natural and man-made wonders along the way. As with all my travels, I love staying in small hotels, looking for those with the most character and experience to show for a particular culture.

Fes is one of Morocco’s cultural destinations, and compared to Marrakesh, has an older world charm, feels more authentic, and is much less touristy, but with the same explosion of visual stimulation. We pre-booked a riyadh and stayed within the “medina” or the old walled city.

A “riyadh” is a traditional Moroccan home distinctly characterized by a central courtyard or garden, a feature it takes from the Andalusian architecture of southern Spain’s “Al Andalus,” a style characterized by most of the old structures in Western Iberia. Its design fuses pre-Islamic, Berber, Roman, Visigoth and Byzantine styles into a very rich and ornate aesthetic that delicately embellishes the interior faces of buildings and structures. On the outside, Andalusian structures are plain and discreet, with only the interior areas utilized for one’s visual pleasure. 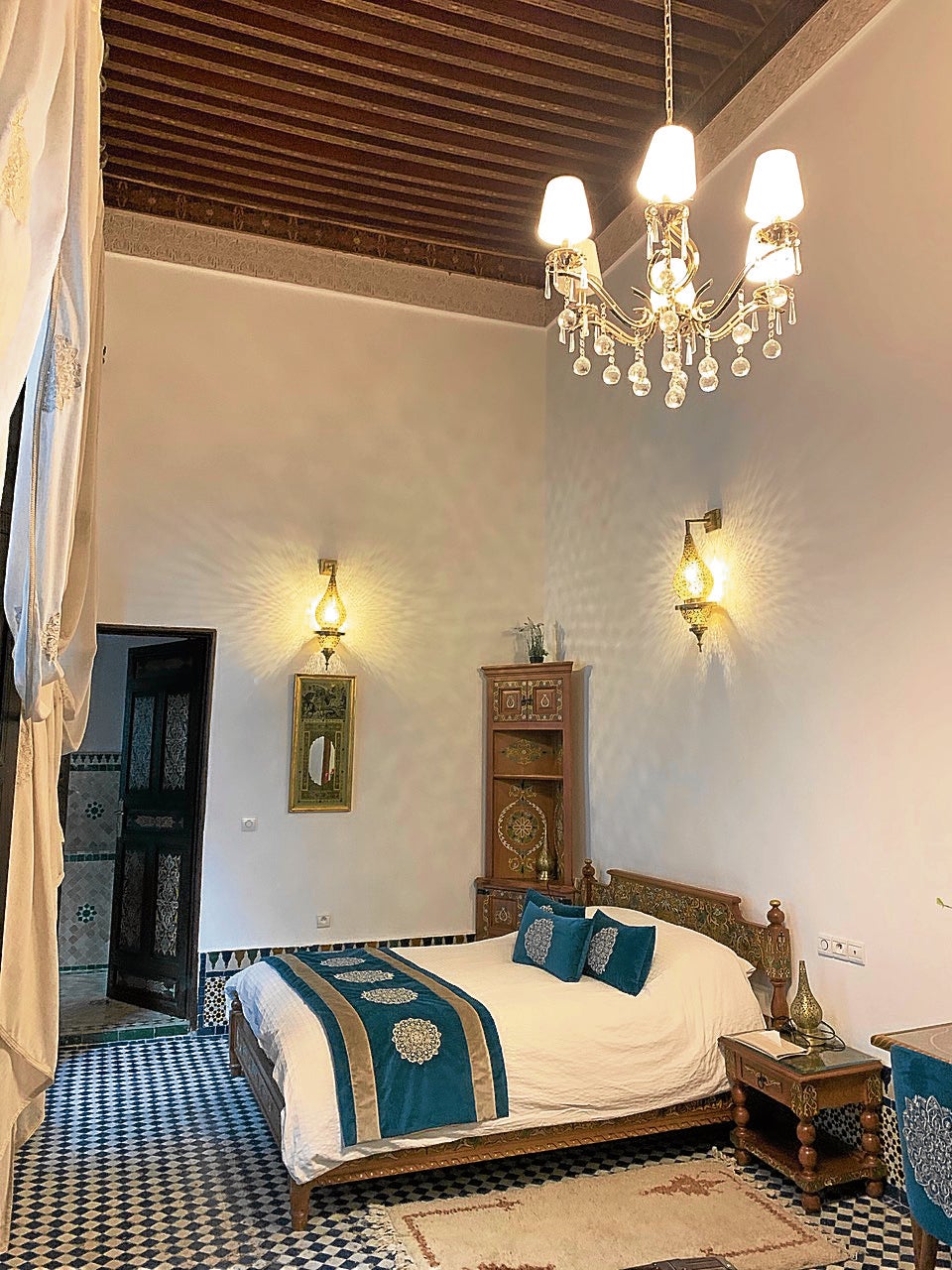 The furniture and décor are fine Moroccan and Andalusian: carved, hand-painted and inlaid with gold and brass accents. In other rooms hung some French colonial crystal chandeliers and local brass lanterns while fabrics are embroidered with Moorish medallions.

We settled in a riyadh called Riyadh Le Grand Alcazar. As in any riyadh in Morocco, access is a challenge for most of the roads in the medina are pedestrianized and riyadhs are only accessed by foot, trolley or by donkey cart if you’re up for the experience. The alleyways can be intimidating, for the structures along the walk hardly have openings except perhaps for their upper floor windows. But for the design aficionados, it is a visual treat: distressed wooden doors, ornate grill work, exotic shades of paint in a full spectrum of fading ochres set against dark cobble-stone pavements, the vibrancy emphasized with streaking sunlight.

Entering our riyadh was like stepping into another world: bright, polished and finely crafted. Built in the early 1940s, it was once owned by Morocco’s Chief of the National Security who was also its first Minister of Culture and Craftwork following Morocco’s independence. It was a secondary home used as a lodge for important guests and his preferred venue for hosting special events. The original construction of this modestly sized structure took some five years to complete, not surprising when one sees all the fine details executed by hand. Nothing less from the Minister.

In 2008, the house was put up for sale, and it was since restored and improved. In 2018, the new owners, the family of two young brothers Othmane and Omar, ran it as a boutique hotel after refurbishing the old original structure with the help of their parents. The renovations took almost two years, as all the craftwork was restored by hand despite the availability of less expensive and more modern construction methods. 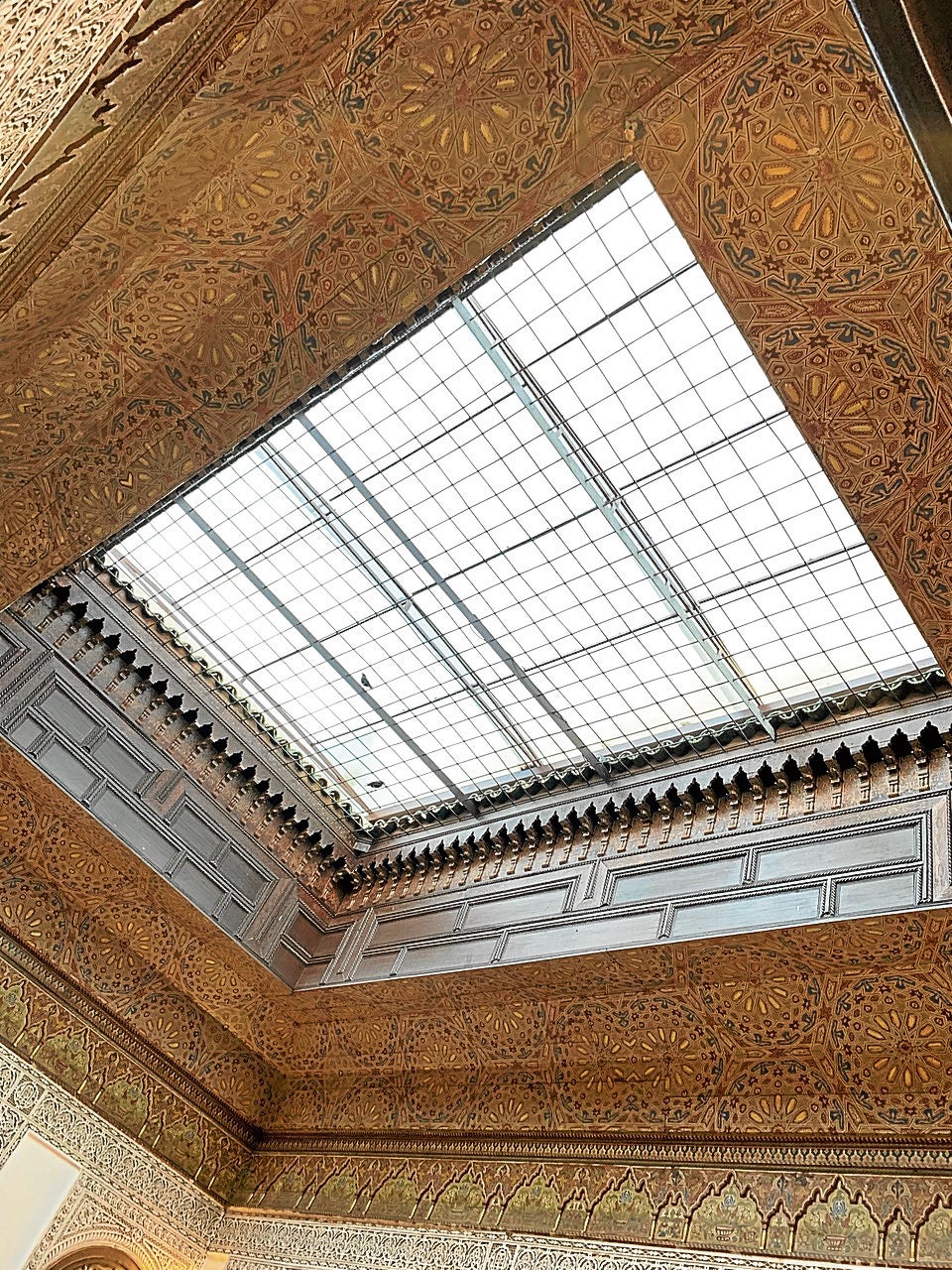 Stepping inside, one is awed by the extravaganza of light and texture, a mix of arabesque and geometric patterns defining the various elements of its architecture. The space is symmetrical, expressing formality and stability.

In the main patio or courtyard, the roof opening has an operable skylight to control the interior temperature from Morocco’s extreme weather. Framing it is a beautifully embellished timber cornice with hand painted geometric ornamentation, as found in many of the grand structures of that era. Below it, the white walls and plaster craftwork are applied in the traditional egg white mixture, supplying the natural collagen that protects the plaster from the hot North African sun and the occasional rains. Putting rhythm to the walls, arabesque plasterwork moldings frame window openings, and the windows and doors themselves are carved woodwork laid over by the traditional ironwork. It is interesting to note that they are constructed in the pre-welding era, with bars assembled with formed metal clips rather than welded. Floors are in beautiful, cool white marble accentuated by local tiles.

The guest suites were decorated in different accent colors, their ceilings constructed with cedar wood, keeping the heat inside during the cold winters in Fes. They are decorated beautifully and are painted by hand in the same fashion consistent throughout the entire riyadh. The windows overlook the central patio, giving one visual access to the beautiful carvings above and below. 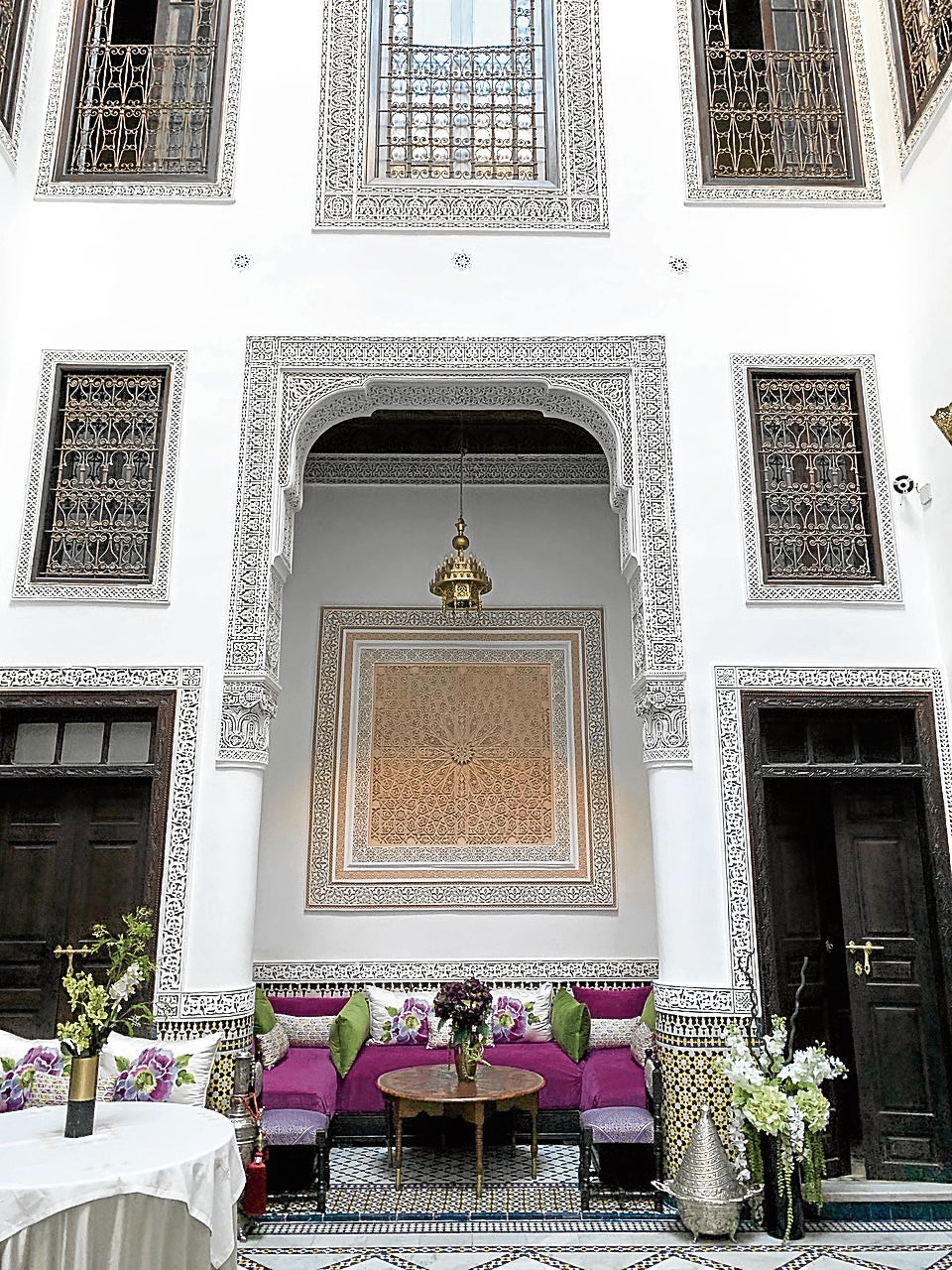 All the floors and wainscots of the suites, are adorned with “zellige” mosaic tiles, the local Moroccan hand made clay tiles with patterns that have actually become quite trendy and fashionable in today’s modern and hipster design concepts. Aside from expressing rustic elegance in the traditional craft of the region, the tiles keep the spaces cool during the extremely hot summers of Fes, as does the marble floor in the main patio.

The furniture and décor are fine Moroccan and Andalusian: carved, hand-painted, and inlaid, with gold and brass accents. In other rooms hung some French colonial crystal chandeliers and local brass lanterns. Fabrics are embroidered with Moorish medallions, further reinforcing the traditions and elements of the region.

Sitting down for tea and biscuits in its patio, one can be a little overwhelmed by the intricacy of it all. You can strain your neck too, from looking up too much. Sensory overload? Yes! But you do expect this from Morocco. Though in this one fine space, it is quite meditative to just be here and allow your eyes the enjoyment of slowly running through the littlest of patterns and details. It is an oasis of calm and of beauty. Absolutely worth every click of the camera shutter, and yes, I am keeping all its photos. 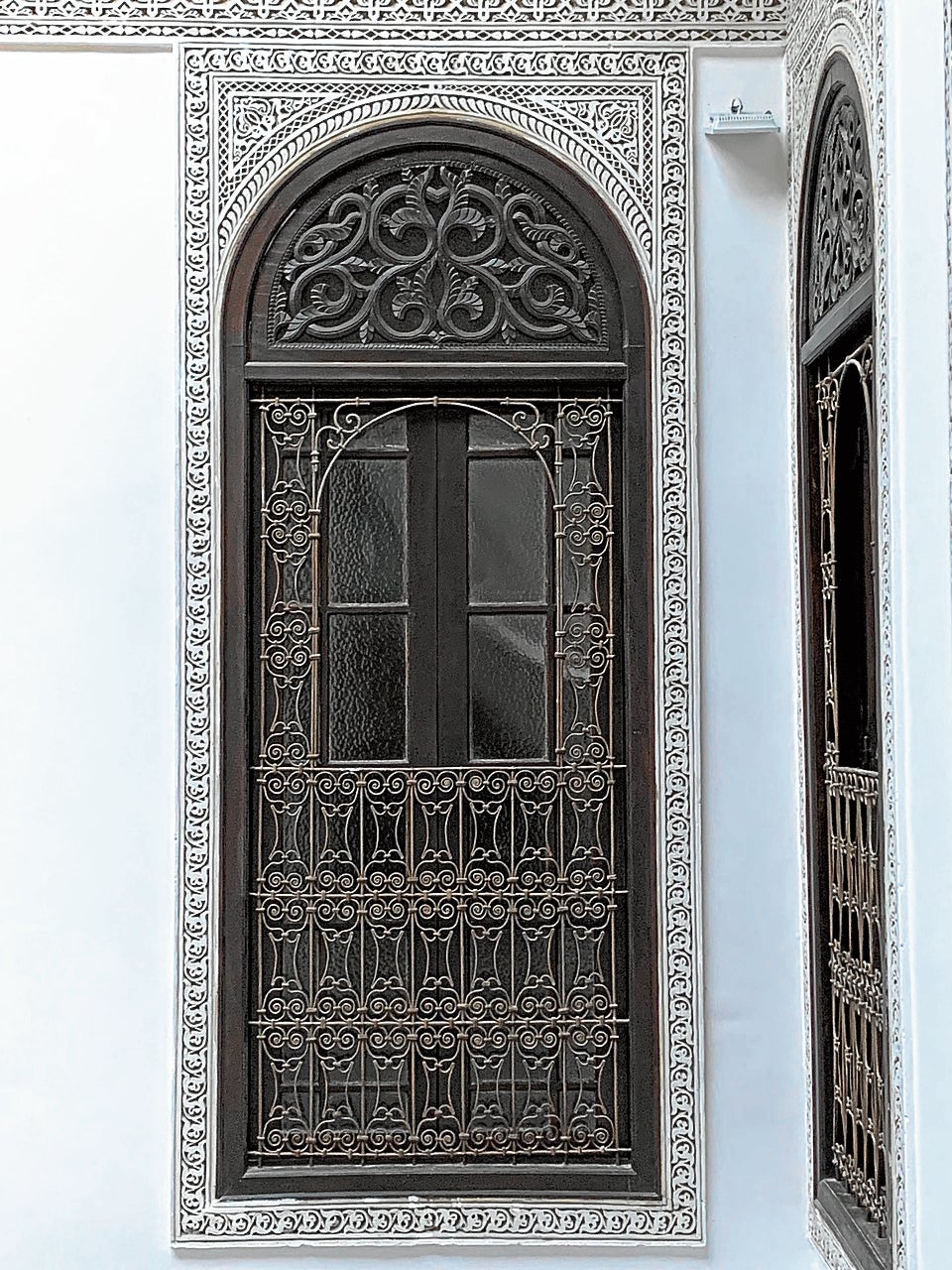 Layers of materiality: windows and doors themselves are carved woodwork laid over by traditional ironwork. It is interesting to note that they are constructed in the pre-welding era, with bars assembled with formed metal clips rather than welded.