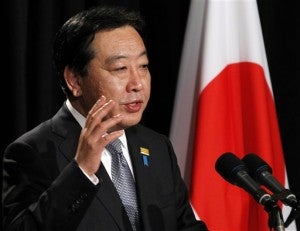 HONOLULU—After years smarting on the sidelines of summits, Japan has taken center-stage by joining talks to create the world’s largest free trade pact, but Tokyo’s messy politics could make the activism short-lived.

Prime Minister Yoshihiko Noda, barely two months into office, took political risks ahead of an Asia-Pacific summit in Hawaii by committing Japan to enter talks on a US-driven free trade area known as the Trans-Pacific Partnership.

The decision by the world’s third-largest economy instantly energized the pact. Within days, Canada and Mexico both raised their hands to join and China – whose rise has been Asia’s main narrative – was put on the defensive.

US President Barack Obama heaped praise on Noda in their first substantive meeting, saying: “I have been extremely impressed already with the boldness of his vision.”

The reception marked a drastic change from a year and a half ago when Japan’s then prime minister, Yukio Hatoyama, only managed a brief chat with Obama over a group dinner during a summit in Washington on nuclear security.

Japan has watched uneasily as China surpassed its economy in size and takes an increasingly assertive role in the world. Noda’s decision comes after South Korea, an economic competitor, sealed its own free trade agreement with the United States that will give its cars and electronics a competitive edge.

Obama has promoted the Trans-Pacific Partnership as a new model for free trade agreements that ensures labor and environmental standards. Twelve nations – notably not China – are involved in talks or hope to participate.

But opinion polls show that the Japanese public is sharply divided. The main cooperative of farmers has spearheaded protests, saying that the Trans-Pacific Partnership would devastate the traditionally protected sector.

No Japanese prime minister has lasted more than a year in office since 2006, with Noda’s predecessors doomed in part over sour relations with the United States and the handling of the March 11 mega-earthquake.

In Hawaii, Noda insisted that Japan would stand firm in talks on the Trans-Pacific Partnership.

“After an in-depth national debate, we will produce results based solely on Japan’s national interests,” Noda told a news conference at the end of the Asia-Pacific Economic Cooperation summit in Honolulu.

“There is a lack of information. There have not been discussions on ways to ease the public’s worries. I have no choice but to say (the announcement) was premature and express my opposition,” Tanigaki said in Japan.

Weston Konishi, a Japan expert at the Institute for Foreign Policy Analysis, said that Noda “went out on a limb” to enter into talks despite the opposition at home.

“I think he was considering Japan’s best interests, but he is really putting his position on the line. It will be interesting to see if he can survive,” he said.

“It is one of the ironies that the Japanese electorate wants decisive leadership of the prime minister but at the same time they also want to have a general feeling of consensus,” he said.

But Michael Green, an aide to former president George W. Bush who is now at the Center for Strategic and International Studies and Georgetown University, said that Japan has evolved in recent years.

“Unlike in trade negotiations 15 or 20 years ago, the business community and the media elites are overwhelmingly in favor. There is much more momentum because they feel that Japan has to join to avoid being isolated,” Green said.

But Japan’s role is almost certain to make the negotiations more complicated. Several US lawmakers have already urged Obama to reject Japan’s participation unless it opens its market further to foreign cars and agriculture.