Most of Wall Street wilts amid worries on virus, economy

NEW YORK  — Most of Wall Street wilted Thursday on worries that the economy’s recent improvements may be set to fade as coronavirus cases keep climbing. 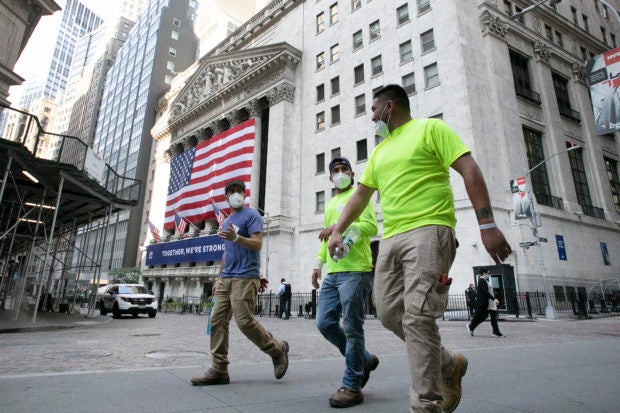 The S&P 500 lost 0.6%, with three in four stocks within the index falling. The sharpest drops hit oil companies, airlines and other stocks whose fortunes are most closely tied to a reopening and strengthening economy. Treasury yields also sank in another sign of increased caution.

Smaller stocks sank more than the rest of the market, which often happens when investors are downgrading their expectations for the economy. The Russell 2000 index of small-cap stocks lost 28.48, or 2%, to 1,398.92.

The Nasdaq composite was an outlier as investors continue to bet big tech-oriented stocks can keep growing almost regardless of the economy’s strength. It added 55.25, or 0.5%, to 10,547.75 and hit another record.

“There are ample reasons for caution,” he said. “Clearly there’s uncertainty surrounding the impact and duration of this virus.”

Thursday’s headline economic report showed that a little more than 1.3 million workers filed for unemployment claims last week. It’s an astoundingly high number, but it’s also down from 1.4 million the prior week and from a peak of nearly 6.9 million in late March.

The improvements help validate investors’ earlier optimism that the economy can recover as states and other governments relax restrictions put in place earlier this year to slow the coronavirus pandemic.

Such optimism helped the S&P 500 rally back to within 7% of its record, after earlier being down nearly 34%.

But economists point to a troubling slowdown in the pace of improvements, including moderating declines in the four-week average of jobless claims.

“The initial jump was the easy part,” he said. “The reality is the labor market continues to face enormous headwinds.”

Investors are worried that worsening infection levels across swaths of the U.S. South and West and in other global hotspots could derail the budding recovery.

Some states are rolling back their reopenings, while others are ordering people arriving from hotspots to quarantine.

“When the restrictions were relaxed in the beginning part of June, you saw parts of the tangible economy do really well,” Schaffer said. “A lot of that has been unwound as we’ve seen a resurgence in case count and some restrictions being put in place.”

Markets have been quick to react to infection and hospitalization rates in Florida and other big Sun Belt states in particular. Thursday’s losses for stocks accelerated after Florida reported the largest daily increase in deaths yet from the pandemic, with its cumulative death toll topping 4,000.

Such concerns helped push Treasury yields lower. The yield on the 10-year note, which tends to move with investors’ expectations for the economy and inflation, sank to 0.60% from 0.65% late Wednesday.

The price of gold also held above $1,800 per ounce. Gold tends to rise when investors are worried about the economy, and on Wednesday it touched its highest price since September 2011. After flipping between small gains and losses, gold for delivery in August dipped $16.80 to settle at $1,803.80.

In the stock market, the sharpest losses hit companies whose profits tend to rise and fall most closely with the strength of the economy. Energy stocks dropped 4.9% for the biggest loss among the 11 sectors that make up the index. Exxon Mobil sank 4.1%, and ConocoPhillips fell 6.6%. Benchmark U.S. crude dropped $1.28 to settle at $39.62 per barrel.

Financial stocks were also particularly weak, with JPMorgan Chase down 2.2% and Citigroup down 2.8%, as a struggling economy raises the threat of borrowers failing to repay their loans.

Walgreens Boots Alliance dropped 7.8% for one of the biggest losses in the S&P 500 after it said it lost $1.7 billion in the latest quarter as the pandemic kept many of its customers around the world at home.

Companies across the country are preparing to report their second-quarter results in upcoming weeks, and forecasts are uniformly dismal.

Stocks in overseas markets were mixed, though China continued its huge run. Stocks in Shanghai added another 1.4%, bringing its gain for July to 15.6% and further stoking worries that speculators are in charge of the market.