NEW YORK  — Wall Street’s rally got back on track Wednesday after more gains for big technology stocks helped pull the S&P 500 to its sixth gain in seven days. 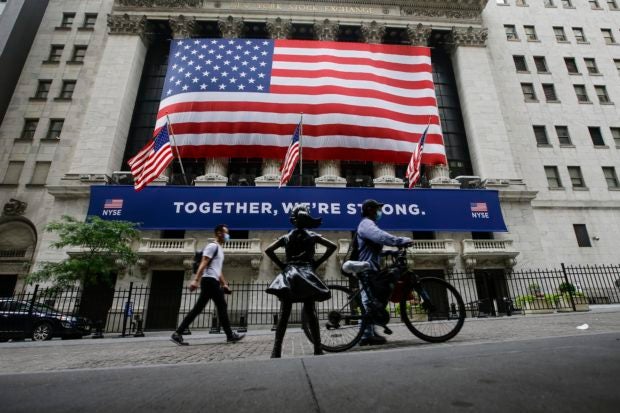 The S&P 500 drifted up and down for most of the day, before a last-hour lift sent it to a gain of 0.8%. Treasury yields and oil prices also ticked higher, but caution continued to hang over markets as gold touched its highest price since 2011.

Wednesday’s up-and-down trading was reminiscent of the market’s moves over the last month, when Wall Street has largely churned in place. Optimism is rising about a reopening economy, but worsening coronavirus infection levels across much of the U.S. South and West threaten to derail the budding economic improvements.

Several very early indicators on the economy may also be flashing yellow, such as dine-in reservations at restaurants and airport traffic, as some states roll back their reopenings, said Katie Nixon, chief investment officer at Northern Trust Wealth Management.

That could be driving investors back into the comfort of the stocks that have served them so well for years: big tech-oriented stocks. Such stocks have continued to climb as investors bet they’ll be able to grow almost regardless of what the economy is doing.

Amazon added 2.7%, Apple rose 2.3% and Microsoft gained 2.2%. Because of their immense size, those three stocks alone were responsible for more than half the S&P 500’s gain for the day.

“It’s sort of like: Buy what feels safe, even though you know you’re maybe overpaying for it,” Nixon said. “But it’s better than betting on a recovery that’s maybe going to be slower than expected, particularly given the fact that we’re seeing a spike in cases in some major areas of the United States.”

Such indomitable strength for technology stocks is raising some concerns, though.

“I would be very cautious on some of these companies,” he said. “The worst thing in the world is to own companies that have just gone hyperbolic.”

Roughly two in five stocks in the S&P 500 fell Wednesday, with several chemical and construction-related companies taking the hardest hits.

The mixed trading follows Tuesday’s snapback, when the S&P 500 fell 1.1% to break a five-day winning streak. The selling accelerated late in the day, and analysts say investors were likely cashing in on recent gains given the uncertainty that lies ahead for markets.

“Up until this time, there’s been a pretty consistent litany of pretty good economic reports, but all of a sudden the reopening seems to have plateaued,” said David Joy, chief market strategist at Ameriprise Financial.

“There’s a certain fragility in the consumer confidence data that’s out there right now,” he said. “Same thing is true in the jobs data. I think the weekly jobless claims number is going to be increasingly important.”

Few headline economic reports are left on the schedule for this week other than Thursday’s update on weekly jobless claims. Next week may have more action, when a couple dozen companies in the S&P 500 are scheduled to report their earnings results for the second quarter.

Expectations for the upcoming earnings season are dismal. More important for investors, analysts say, may be what companies say about how they plan to navigate the rest of the year and even 2021, when profits are expected to grow again.

Gold’s price tends to rise with worries about the economy and inflation, and it has climbed more than $300 since mid-March. Its rise, alongside the stock market’s rally, highlights for critics the disconnect between Wall Street and the economy.

Treasury yields ticked higher. The yield on the 10-year Treasury rose to 0.65% from 0.64%. It tends to move with investors’ expectations for the economy and inflation.

In Asian stock markets, Japan’s Nikkei 225 slipped 0.8%, Hong Kong’s Hang Seng added 0.6% and South Korea’s Kospi slipped 0.2%. The biggest action was in Shanghai, where stocks jumped another 1.7%. That brings their gain to 14% for July so far, raising concern that speculators are driving the market.