French bistros down but not out, says Paris chef | Inquirer Business

French bistros down but not out, says Paris chef 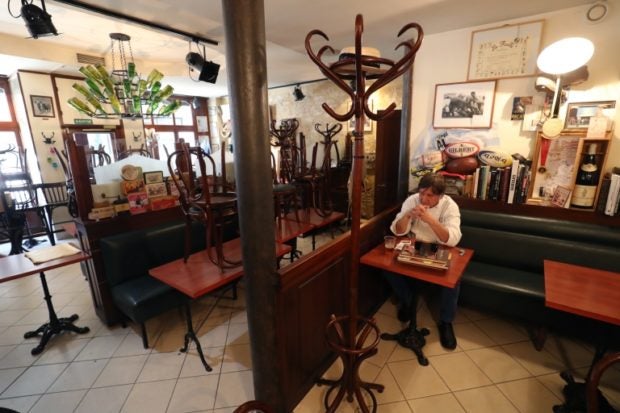 French chef and restaurant owner Alain Fontaine answers interview questions in his restaurant “Le Mesturet” on May 28, 2020 in Paris after French Prime minister announced updated lockdown measures to curb the spread of the COVID-19 disease caused by the novel coronavirus. Image: AFP/Ludovic Marin

Coronavirus took a terrible toll on a French icon, the corner bistro, but it will survive, says chef and restaurateur Alain Fontaine.

“If bistros disappear, it’s life that disappears,” Fontaine told journalists at Le Mesturet, the bistro he has run for 18 years in the heart of Paris, on Thursday.

The bistro is a place where one can “talk nonsense or discuss very important things,” he said, likening the French institution to the Irish pub. Think of it as a “people’s parliament,” the 62-year-old said, quoting Honore de Balzac, the prolific chronicler of early 19th-century French society.

The numbers were already alarming before the crisis, dropping from 200,000 bistros and cafes at the beginning of the 20th century to a little over 50,000 after World War II to 25,000 today, Fontaine said.

The coronavirus lockdown imposed in mid-March was a “disaster” for the sector, he said, noting that bars and restaurants remained open throughout the Nazi occupation of France during World War II.

But he dismissed dire predictions that up to 40% of the businesses would not survive the crisis, saying many would simply change hands. Unfortunately however, large restaurant chains will snap up many small eateries, Fontaine predicted, telling members of the Paris-based Anglo-American Press Association, “The vultures are already here.”

Cafes, bars and restaurants were finally allowed to reopen on June 2, though in the Paris region, considered at high risk of ongoing coronavirus spread, eating and drinking establishments were initially allowed to serve clients only at outside tables.

It was Paris Mayor Anne Hidalgo who “saved me” with the idea of cordoning off sections of streets to make room for outside tables, said Fontaine, who is spearheading a drive to win UNESCO recognition of the French bistro and cafe as intangible cultural heritage.

Le Mesturet is able to serve its traditional meals, like blanquette de veau and magret de canard, recipes that Fontaine learned from his mother, to an additional 40 diners outdoors, thanks to the measure. Eateries like Fontaine’s have been allowed to spread out along sidewalks and even set up tables in parking spaces and outside neighboring businesses if the owners did not object.

“Anne Hidalgo knows her electorate,” Fontaine said, alluding to the fact that the mayor is tipped to win re-election on Sunday.

The COVID-19 epidemic has claimed more than 29,000 lives in France, one of the world’s highest reported tolls.

Fontaine said Parisians need to be lured back to the bistro after months of self-isolation and working from home. In addition, he joked, “we need a new D-Day landing” of tourists, noting that 30% of his clientele are visitors from abroad.

France, normally the world’s most visited country, lifted restrictions at European borders on June 15, and the tourism industry hopes that foreign visitors will start pouring in again as the summer season kicks off.

Neighbors Britain, Germany, Belgium, Italy and Spain make up the bulk of foreign visitors, with the United States and China not far behind, in normal times.

Fontaine, also heads an association of maitres restaurateurs, essentially chefs who insist on preparing all meals on site from fresh, raw ingredients.

If French bistros win UNESCO’s nod, the time-honored institution will join the likes of Mexican mariachi music and Mongolian calligraphy on the list of intangible heritage worthy of being safeguarded for future generations.

But Fontaine is not bothered if the dossier does not succeed next year, which would mean waiting another two years for the honor.

If it wins in 2023 it will be right before the Paris Olympics of 2024, providing an excellent showcase for what he calls an “anchor of France’s art of living.” JB