Virus blow to Philippine aviation felt hard on the ground

MANILA, Philippines — Don Martin Atilano, 28, was determined to pursue a career in aviation. But color vision deficiency limited his chances of becoming a pilot or a flight attendant, so he settled for the next best thing by landing a job in the industry’s ground handling services.

Over the past five years, Atilano worked with the country’s major airlines before moving to Cebu Pacific unit 1Aviation Groundhandling Services Corp. He was part of the “pioneering batch” who handled the company’s operations in Zamboanga International Airport, a major gateway in Mindanao.

But on June 18, Atilano’s dream career was cut short when he was called to a meeting with their station head and told that he was among the more than 1,000 employees—or 25 percent of 1Aviation’s workforce—to be retrenched.

It was the single largest layoff in the domestic aviation business since the new coronavirus disease (COVID-19) emerged early this year and laid waste to the airline industry in the Philippines and around the world. 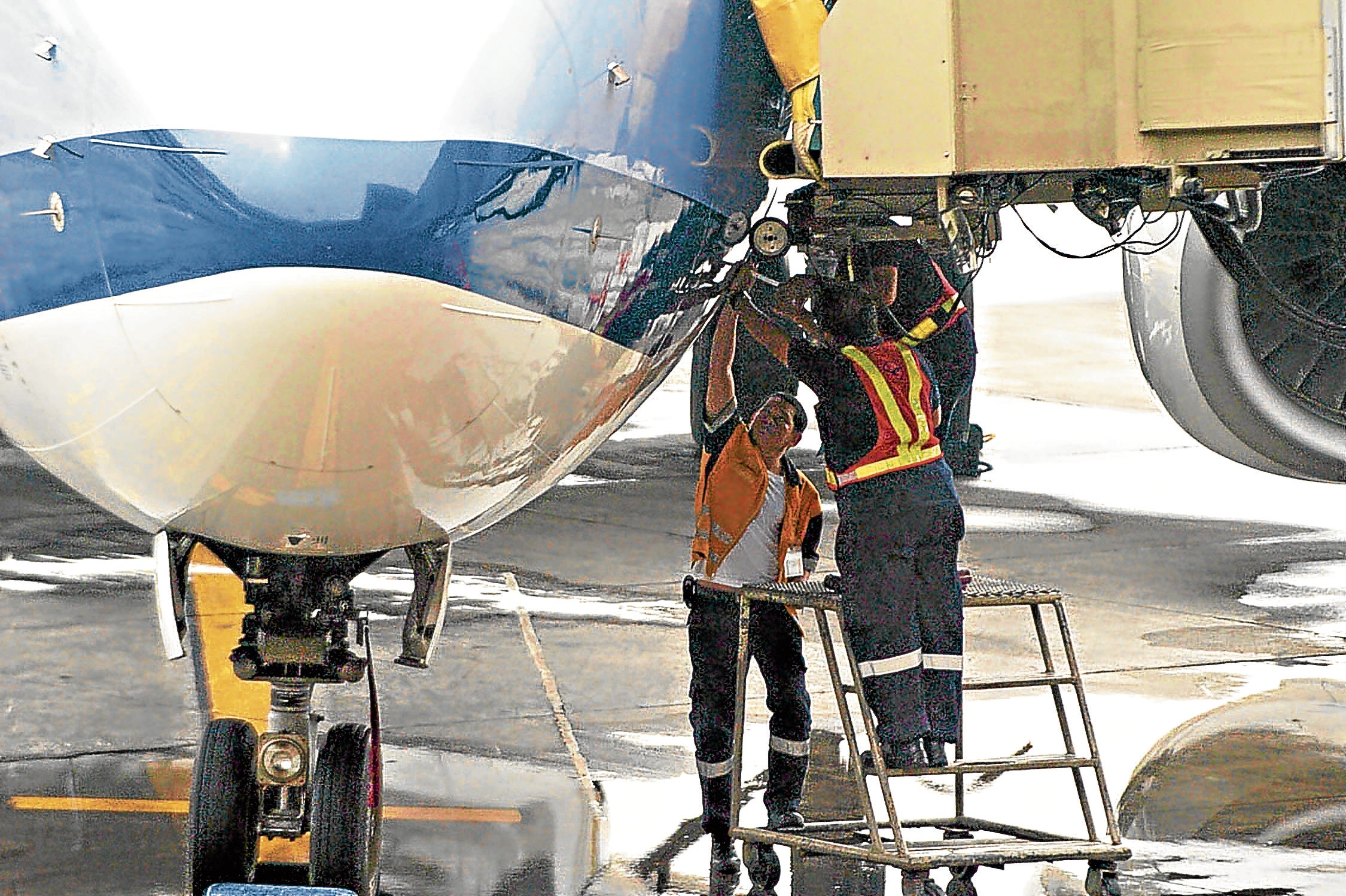 KEY SUPPORT An airline ground handling service crew inspects the damage on a plane following an accident at Ninoy Aquino International Airport in 2013. Workers in the aviation industry are among the sectors hardest hit by the economic slowdown caused by the coronavirus pandemic. —GRIG C. MONTEGRANDE

“I was sad, confused and in shock,” Atilano, a customer service agent supervisor, told the Inquirer in an interview on Friday.

Counting himself as one of the most hardworking “seniors’’ in the company, Atilano said he understood the pandemic’s devastating impact on the aviation business but he still expected to stay employed.

But then, many of those who were retained in his station were new hires.

1Aviation was established in 2018 following the shutdown of Miascor Aviation Services. President Duterte ordered the nonrenewal of Miascor’s service contracts after a case of luggage theft involving some of the company’s employees.

A spokesperson for the company, which laid off an initial batch of 400 workers in April, said the recent retrenchment covered a mix of new and longtime employees.

The layoffs underscored the pandemic’s toll on the airline industry and key support sectors such as ground services, which include baggage handling, passenger check-in and ramp operations.

In an Inquirer interview on Friday, Roberto Lim, vice chair of the industry group Air Carriers Association of the Philippines, said demand remained weak and domestic airlines had so far restored only 20 percent of their original network.

Making matters worse are the inconsistent government regulations, both national and local, amid the background of rising COVID-19 cases.

In this critical time, airlines may be forced to cut costs and jobs beyond the initial wave of layoffs at Philippine Airlines, Cebu Pacific and AirAsia Philippines.

“Over time, you will expect these airlines to become smaller in terms of manpower or aircraft,” Lim said.

Lim also expressed “disappointment” in Malacañang’s inaction on calls to provide a stimulus package for the local airline industry.

The sector would have benefited from the enactment of financial packages, like the proposed P1.3-trillion Philippine Economic Stimulus Act of 2020, which would allow the government to intervene and offer support such as emergency loans and debt guarantees to help the industry plug a cash drain.

Outside the Philippines, global carriers are struggling as demand falls and countries adjust quarantine restrictions with the emergence of new coronavirus hot spots.

These companies that receive money from the government should also tighten their belts. He said strict conditions will include limits to dividends, management bonuses and “luxury expenditures.”

Atilano remained grateful for his years working in aviation, saying his company “gave me a home and a family for the past two and a half years.”

He said the separation package offered by 1Aviation was “fair” and that the employees were given a salary advance of two months.

They were also assured of being rehired once the industry recovers, he said.

Atilano said he is keeping his hopes up despite having no immediate job prospects. “I should just trust the process and look at the brighter side: That this is a sacrifice to save our company.”