Global stocks mixed as WHO warns of worsening coronavirus 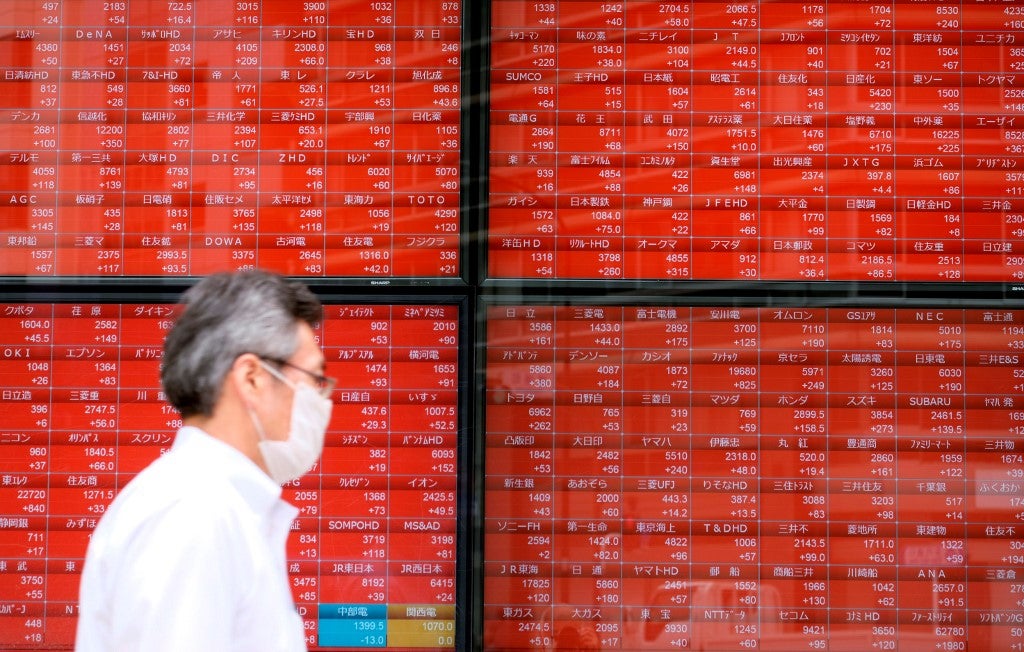 A pedestrian walks past an electronic quotation board displaying share prices of the Tokyo Stock Exchange in Tokyo on June 16, 2020. – Tokyo stocks opened sharply higher on June 16 as investors took heart from rallies on Wall Street with eyes shifting onto the Bank of Japan’s policy decision later in the day. (Photo by Kazuhiro NOGI / AFP)

Global stocks were mixed Friday as markets weighed hopes that business activity would get back to normal against worrisome coronavirus trends in several parts of the United States, while the World Health Organization warned of new outbreaks.

Bourses in Europe and Asia finished higher and the US at first seemed headed for another positive session as well.

But the tide turned around midday on Wall Street after Apple announced that due to rising coronavirus cases, it would close some stores that had reopened.

While coronavirus figures have fallen sharply in the Northeast and much of the Midwest, states including Florida, Nevada and Arizona have reported record case counts in recent days.

Apple’s announcement sent all three major US indices into the red, although the Nasdaq eked out gains to close narrowly higher.

Maris Ogg of Tower Bridge Advisors said Apple’s move reflects “the way this virus cycles geographically” and shouldn’t meaningfully affect the outlook for the US.

“We have some major things that can be working toward improvement,” Ogg said, pointing to the bounce from reopening the economy and rising strength in the housing market.

The World Health Organization warned of a “new and dangerous phase” of the coronavirus pandemic, with people tiring of lockdowns despite the disease’s accelerating spread.

The virus, which has now killed more than 454,000 people and infected 8.4 million people worldwide, is surging in the Americas and parts of Asia even as Europe starts to ease restrictive measures.

The euro rose against the dollar after European leaders met via video conference to seek agreement on the details of a 750 billion euro stimulus package for their economies, and German Chancellor Angela Merkel said there were no disagreements about the principle of joint borrowing.

But the currency slipped back when Dutch Prime Minister Mark Rutte raised doubts that EU leaders would reach a deal at a summit in July.

The British pound struggled to bounce back from Thursday’s drop that came after the Bank of England unveiled more cash stimulus to prop up the virus-battered UK economy.