Stocks rally on Wall Street, worldwide with hope for economy 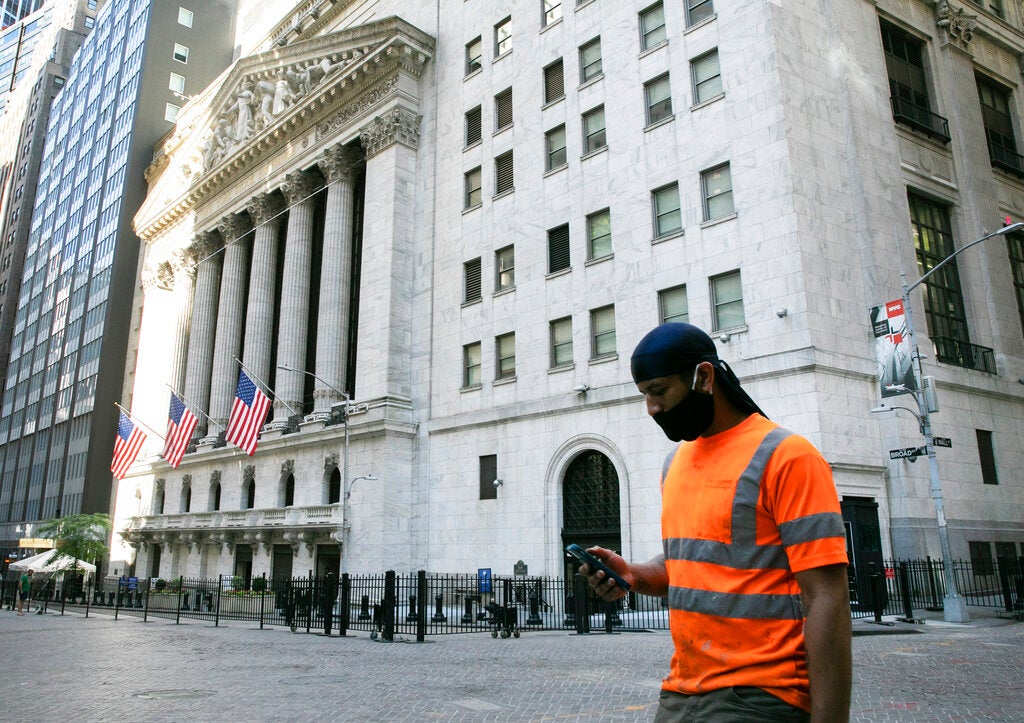 A man wearing a mask walks by the New York Stock Exchange, Tuesday, June 16, 2020. Stocks are rising sharply in early trading on Wall Street after retail sales in the U.S. soared by a record 17.7% from April to May, double what economists were expecting and a welcome sign that spending is partially rebounding after the devastating coronavirus shutdowns. (AP Photo/Mark Lennihan)

NEW YORK — Stocks are rallying worldwide on Tuesday, and Wall Street is heading for its third straight gain after U.S. retail sales rebounded last month by much more than economists were expecting.

The S&P 500 was up 2.7% in the first few minutes of trading, following up on even stronger gains in European and Asian stock markets. In another sign of improving optimism, Treasury yields moved solidly higher.

Retail sales jumped 17.7% from April to May, more than double economists’ expectations, to retrace some of their record-setting plunges in March and April as businesses reopen across the country. The report gives more credence to investor expectations that the economy can pull out of its recession relatively quickly and that the worst may have already passed.

Among other encouraging signs spurring markets worldwide: Researchers in England said they have the first evidence that a drug can improve survival from COVID-19, one that is already widely available and cheap. Analysts also said a report from Bloomberg News that the White House is preparing a nearly $1 trillion infrastructure plan was helping to lift markets, but any such proposal is likely to face huge challenges about how to pay for the improvements.

Underpinning all of it is continued aid coming from central banks, which have repeatedly come to the economy’s rescue. The Federal Reserve helped turn markets around on Monday after it said it will buy individual corporate bonds as part of a previously announced program to support lending markets for big employers. The announcement helped the S&P 500 flip from a loss of as much as 2.5% to a modest gain for the day.

Still, caution continues to run through markets after the remarkable run for stocks in recent months. A record number of fund managers in Bank of America’s monthly survey say the stock market is overvalued.

Such skepticism has been prevalent for much of the stock market’s huge comeback after hitting a bottom in late March. The S&P 500 plunged nearly 34% from its record set in February on worries about the severe, sudden recession slamming into the global economy because of the coronavirus pandemic.

Immense, unprecedented aid from the Fed and Capitol Hill helped halt the declines. More recently, investors have been pushing up shares of companies that would benefit from a reopening economy on expectations that activity can rebound as governments relax shutdown restrictions put in place to slow the spread of the virus.

The yield on the 10-year Treasury rose to 0.76% from 0.70% late Monday. It tends to move with investors’ expectations for the economy and inflation.