Lady behind Jollibee feeds kids (not with burgers) 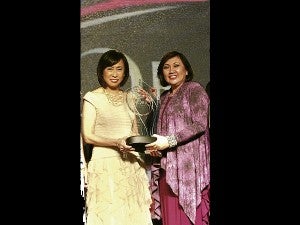 Hunger makes the body weak and numb, the mind goes blank and the world turns gray. It makes you feel dizzy all the time, unable to work, think and focus. It can even drive one crazy.

“That’s how we, grownups, feel when we are hungry.  Imagine how it is like for the children? It is a lot worse. I know because I had been hungry when I was a child,” says Grace Tan-Caktiong, the woman behind the Jollibee Food Corp. Group, wife and partner of the food chain founder Tony Tan-Caktiong, and president of Jollibee Foundation.

“I was always hungry then that I thought it was a way of life, that everybody was hungry, too,” she adds without dwelling on the past in details.

While it is not what she thought it was, the reality that a great number of people, many of them children, are starving frustrates Grace.

“No child should be hungry,” she says.

With this firm belief, it came as no surprise that Grace—when tasked to put together the JFC group’s CSR projects and spearhead the creation and operation of the group’s foundation— pushed forward her cause as Jollibee Foundation’s flagship program.

Thus, Busog Lusog Talino (BLT) school feeding program was born in 2007. It started in Manuel L. Quezon Elementary School in Tondo, Manila, zeroing in on 30 or so of the most undernourished grade one pupils in the school.

“When we were starting, the kids were pale and thin, their eyes were bulging, they had very dry hair and were hardly moving.  Only two weeks of daily feeding (lunch), the kids started gaining weight and have become more active,” says Carmela Oracion of Ateneo Center for Educational Development, an implementing partner of the foundation.

Grace and her group were so happy with the initial results of the pilot program that only four months into it, the foundation had decided to bring BLT  to the rural area, starting with a public elementary school in Bayombong, Nueva Viscaya.

The second school was followed by six more bringing the total pilot schools to eight on the first year of the program implementation.

Today, participating schools have reached 450 with total children-beneficiaries reaching 25,000. At any given lunch time on school days, 15,000 school children are being fed under the program. 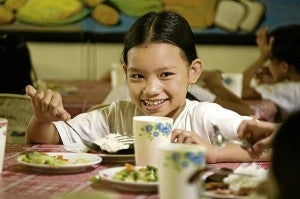 BLT is a school feeding program that not only addresses hunger but also promotes proper nutrition among grades one and two pupils. It also has become an education intervention tool that helps keep the children stay in school and learn better by keeping them fit and healthy, thereby reducing the dropout rate. Many children do not finish even grade one due to hunger caused by poverty, foundation officials say.

Schools are selected based on the Department of Education’s list of schools with high cases of malnutrition while the beneficiary students are identified by the school officials.

Grace says eligible schools, through their principals, should apply with the foundation. “The initiative should come from them. It is useless to force a program on somebody who is not enthusiastic about it or you will just be wasting your time and energy while there are many others waiting to be helped,” Grace explains.

The selected children are provided lunch daily for 136 days or during the eight-month duration of the school year.

Based on a BLT report card, this advocacy of the foundation has improved the nutritional status of pupils participating in the program, resulting in the reduction of the number of undernourished pupils.

The report also shows the following findings on the program implementation from 2008 to 2010: Eight out of 10 pupils attained their normal weight-for-age status after the 136-day feeding cycle, with the children gaining an average of four to five kilos; absenteeism was minimized as the pupils’ health improved, and parents, who participate in the feeding program, acquire the skills in preparing low-cost yet nutritious meals.

Unlike other similar programs, however, BLT is much more than just a feeding program.

It has evolved into becoming an advocacy marketing campaign—one that gives several sectors of the society a push to get involved in the program or adopt its advocacy.

“Our program is open to all parties that support our goal. It is also free to be copied by those who want to do it on their own,” Grace says.

“We started BLT but it is not something we keep to ourselves. It is an advocacy that we want to share with everybody. They can copy the concept, join us or whatever, we don’t mind. We want more and more people to do it through donation, becoming implementing partners, through whichever way,”

What can be considered the program’s major breakthrough is its success in getting the parents, volunteers, school personnel and local governments actively involved. 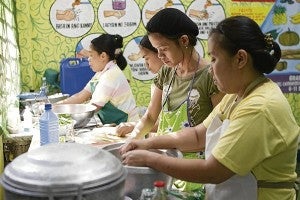 “The parents do the marketing, cook the food, serve the meals and clean the areas after the feeding,” says Grace, adding that the school principals play a major role in this.

The parents’ role, however, doesn’t end after the two-year Jollibee-assisted feeding. Most of these parents bring home, for the benefit of the other members of the family, what they are taught under the program, particularly food safety, nutrition and parenting, through seminars conducted with the help of Jollibee group volunteers.

Under the feeding program, Grace says only P11 per child is spent per meal, so that for about P1,500, a child can be fed for the entire feeding period.

The foundation, at the start of the program, sought the help of the Food and Nutrition Research Institute for nutritious recipes at the least possible cost., Later, school officials and parents, particularly in the provinces, contributed their own recipes that are equally nutritious and affordable.

“It is not the job of Jollibee to solve the problems of the world. But the best thing that it is doing is to provide the push. Because of the push, local government, schools and the community where the schools belong take it upon themselves to move on with the program,” says Oracion.

The involvement of the local government and other members of the host community also ensures the program’s success. LGUs, civic organizations, Department of Education people and JFC Group employee volunteers monitor that program’s progress in participating schools.

Jollibee Foundation has only seven full-time employees and it is impossible for it to do the job alone, considering the continuous expansion of its coverage which is made easy with the help of the network of JFC outlets throughout the country.  Thus, the foundation has developed and adopted what it calls the BLT “social franchising system.”

Under the system, the foundation serves as the franchisor that works with local implementing partners who are the franchisees. The franchisees oversee the daily feeding activities in schools and manage the release of funds to the public school principal on a regular basis. The LIP or franchisee, which manages the implementation of BLT in five to 10 schools per site, can be a local school, local government unit or a civil society organization.

A new level of partnership came about in the BLT franchising system with the involvement of area implementing partners. They are existing LIPs that have organization capacity to provide technical and administrative support to other LIPs in implementing BLT while still managing their own schools.

This allows Jollibee Foundation to commit its presence in a school for only three consecutive school years, providing funds and putting in place the system. After three years, the program is turned over to the franchisee to continue. The parents who “graduate” from the program are expected to continue doing at home whatever they learned from the BLT.

It is through these that BLT is able to foster community ownership of the program and ensure its sustainability, 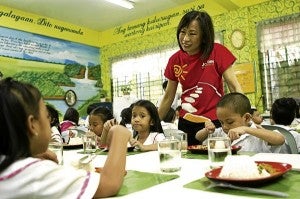 “People think it is better to teach people how to fish rather than give them fish. Personally, I believe in that too but, as a wise guy once told me, before you can even teach these kids how to fish, you need to give them fish first or they would not even have a chance to learn how to fish,” she says.

The feeding, under the program, is just the “push” that teaches the parents of the many possibilities of feeding their family properly, the schools, LGUs and civic organizations, of the ways to effectively implement such a program.

“After giving them the fish and they are ready, they can already be taught how to fish themselves.”

BLT is present in 95 cities/municipalities in all regions, except the Caraga but it is starting there soon.

On top of the foundation’s own funds, donors—including customers of the JFC group—provide strong support that make the program’s continuous expansion possible.

For now, the foundation targets to steadily expand the number of participating schools and beneficiaries, doubling them next school year and bringing the number to 2,841 schools and 85,320 pupils by 2015.

Eventually, however, Grace says the foundation’s vision is to eliminate feeding. It aims to see the day when the BLT will no longer be necessary because every parent will be able to provide their children nutritious food at the comforts of their homes.

“That is an ambitious long-term goal but we are going in that direction,” she says.