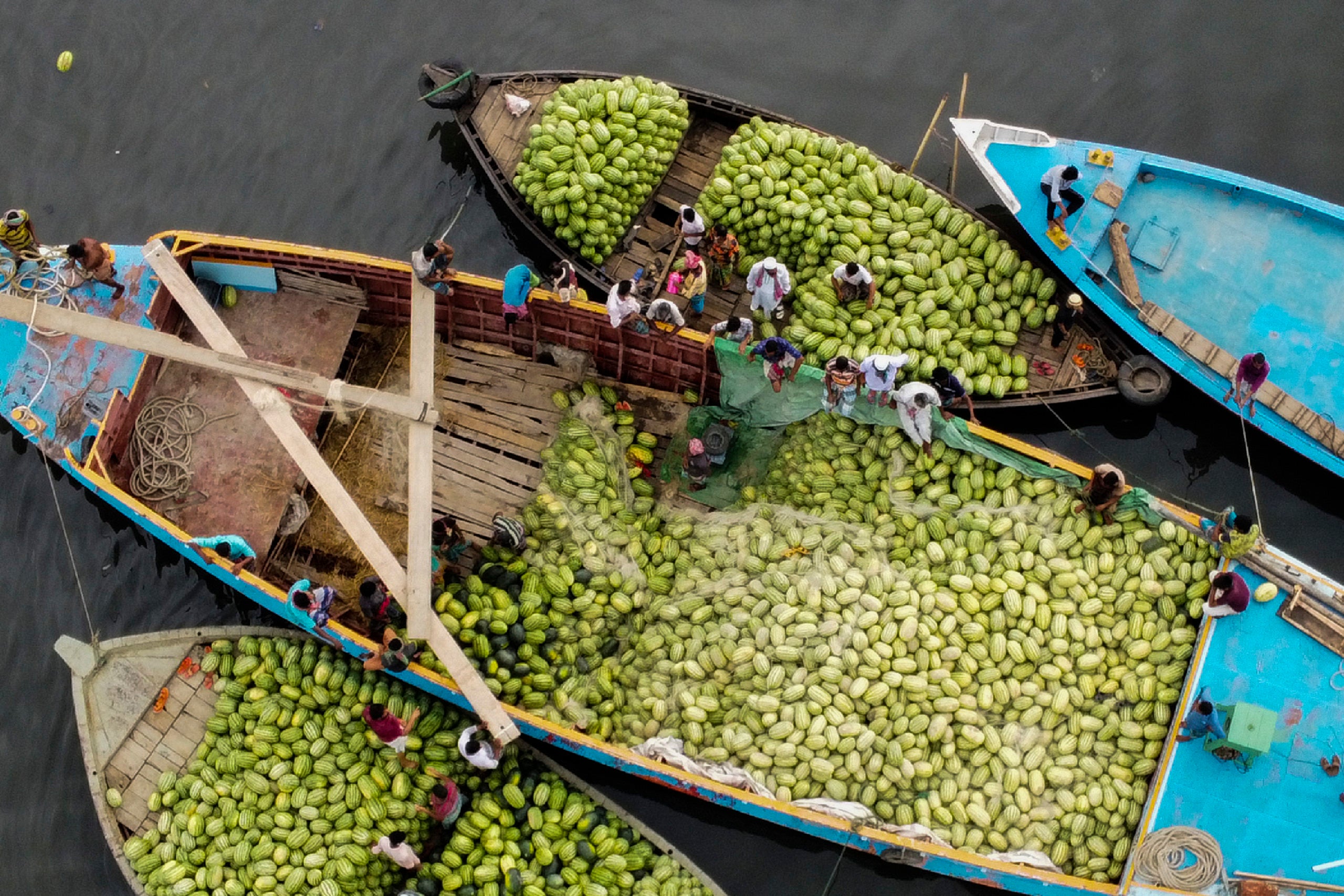 This aerial picture shows workers onloading watermelons from boats in Burigonga river during a government-imposed lockdown as a preventative measure against the spread of the COVID-19 coronavirus in Dhaka on April 17, 2020. (Photo by MUNIR UZ ZAMAN / AFP)

DHAKA — The authorities have been exploring labor markets in African countries as overseas jobs may decline in the traditional Middle Eastern and Southeast Asian countries due to coronavirus pandemic.

Foreign Minister AK Abdul Momen on Saturday told The Daily Star that they were looking for new jobs in agriculture sector of the countries.

“We are not saying that the African governments will recruit our people. What we are saying is that African countries have huge land where our people to go for contract farming and recruit workers from Bangladesh,” he said.

The foreign minister said that farming sector is going to be very important in the aftermath of the coronavirus pandemic.

He specifically mentioned the names of Tanzania, Sudan, Uganda and The Gambia where huge opportunities lye for investment in the agriculture sector.

The move comes as several lakh Bangladeshi migrants may return home in the coming months after losing jobs in the Middle Eastern and Southeast Asian countries.

Besides, overseas jobs in these markets may also see a sharp decline, officials said.

The World Bank has projected remittance decline by 22 percent this year compared to $18 billion received from about one crore Bangladesh migrants last year.

“As we are now focusing on economic diplomacy, we have asked our ambassadors to look for new avenues. We have got some reports suggesting that if our businessmen can invest in those countries, over the time some 40 lakh Bangladeshis can have jobs,” Momen said.

“But we need to work on the ground. Our businessmen have to come forward. The government can only facilitate them,” he said.

Presently, some 3-4 lakh Bangladeshis are living in South Africa. They are basically asylum seekers there and are mostly doing businesses.

Some 50,000 Bangladeshis are in Libya, but the country is a major route for human trafficking to Europe via the Mediterranean amid a civil war that has been going on since the fall of Muammar Gaddafi in 2011.

Some Bangladeshis work in other African countries, but the continent has never been a lucrative labour destination.

“We have been talking about exploring African labour markets for the last more than a decade, but we have not really worked on the ground. Now, after the pandemic, we are trying to seriously look into the issue,” said a foreign ministry official working in Africa desk.

There is not anything final yet, the official said, adding, “We are still in the initial stage.”

Sabbir Ahmad, Bangladesh ambassador to South Africa, Bangladesh has diplomatic representation only in 30 of the total 54 African countries.

“We need to develop relations with all the countries and find how we can improve business and labour relations,” he told The Daily Star Saturday.