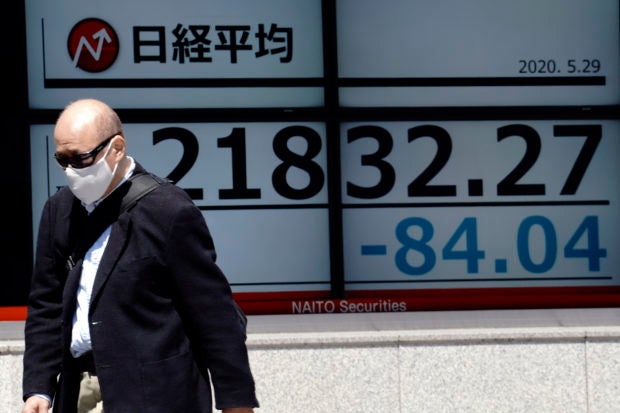 A man walks past an electronic stock board showing Japan’s Nikkei 225 index at a securities firm in Tokyo Friday, May 29, 2020. Shares fell Friday in Asia after Wall Street’s rally petered out amid worries about flaring U.S.-China tensions. (AP Photo/Eugene Hoshiko)

Benchmarks declined in Hong Kong, Tokyo and Sydney but rose in Shanghai.

Investors are nervously awaiting a news conference about China by President Donald Trump later in the day.

U.S. and Chinese officials have been trading harsh rhetoric recently on everything from Hong Kong to the response to the coronavirus outbreak. One fear is that further friction could lead to another punishing round of escalating tariffs between the two countries that would hit the global economy when it’s already in a severe recession due to the coronavirus pandemic.

U.S. Secretary of State Mike Pompeo has said the law means Washington may no longer treat the former British colony, already reeling from anti-government protests and the pandemic, as autonomous from Beijing. That could undermine the city’s status as a major center for trade and finance.

“The concerns are that this escalates over the course of the summer,” said Quincy Krosby, chief market strategist at Prudential Financial. “It’s like lighting a match.”

Weak economic data from Japan also cast a pall, as the government reported that industrial production fell more than 9% in April from the month before, while retail sales dropped nearly 10%, month-on-month. That was the biggest fall since a sales tax hike in 1997.

Energy producers and banks fell to some of Thursday’s sharpest losses.

Twitter also lost 4.4%. Trump signed an executive order late Thursday to study whether new regulations can be put on social media companies. He has been railing against Twitter after it applied fact checks to two of his tweets.

Dollar Tree jumped 11.6% for the largest gain in the S&P 500 after the retailer reported stronger revenue and earnings for its latest quarter than Wall Street expected. In an encouraging sign, executives also said recent trends have been improving for purchases of discretionary items, such as kitchenware and toys, instead of just essentials for hunkering down.

Even with Thursday’s loss, the S&P 500 is still on pace for its third weekly gain of at least 2.5% in the last four weeks. Following their breathtaking drop of nearly 34% in February and much of March, stocks began recovering after the Federal Reserve and Capitol Hill pledged unprecedented amounts of aid for the economy.

More recently, the market has pushed higher as investors move into stocks that would benefit most from a reopening economy. Governments around the country and around the world are slowly lifting restrictions meant to corral the outbreak, which has investors hoping the worst of the recession has already passed, or will soon.

Some analysts warn the rally has been overdone and economies and businesses may take much longer to recover. That could be setting investors up for disappointment in the future.

Longer-term Treasury yields rose Thursday after a government report showed that the number of workers filing for unemployment benefits dipped for the eighth straight week, though the number remains incredibly high.

Perhaps more importantly for the market, the number of continuing claims for unemployment fell to 21.1 million from 24.9 million. It’s the first decline since the number of layoffs exploded in March. If it continues, economists said it could be a sign that more people are going back to work as states begin their reopenings.

The yield on the 10-year Treasury fell back to 0.67% from 0.70% late Thursday. It tends to reflect sentiment about the economy’s strength and inflation.

A barrel of U.S. crude oil for delivery in July lost 43 cents to $33.28 per barrel in electronic trading on the New York Mercantile Exchange. It rose 90 cents to settle at $33.71 on Thursday.