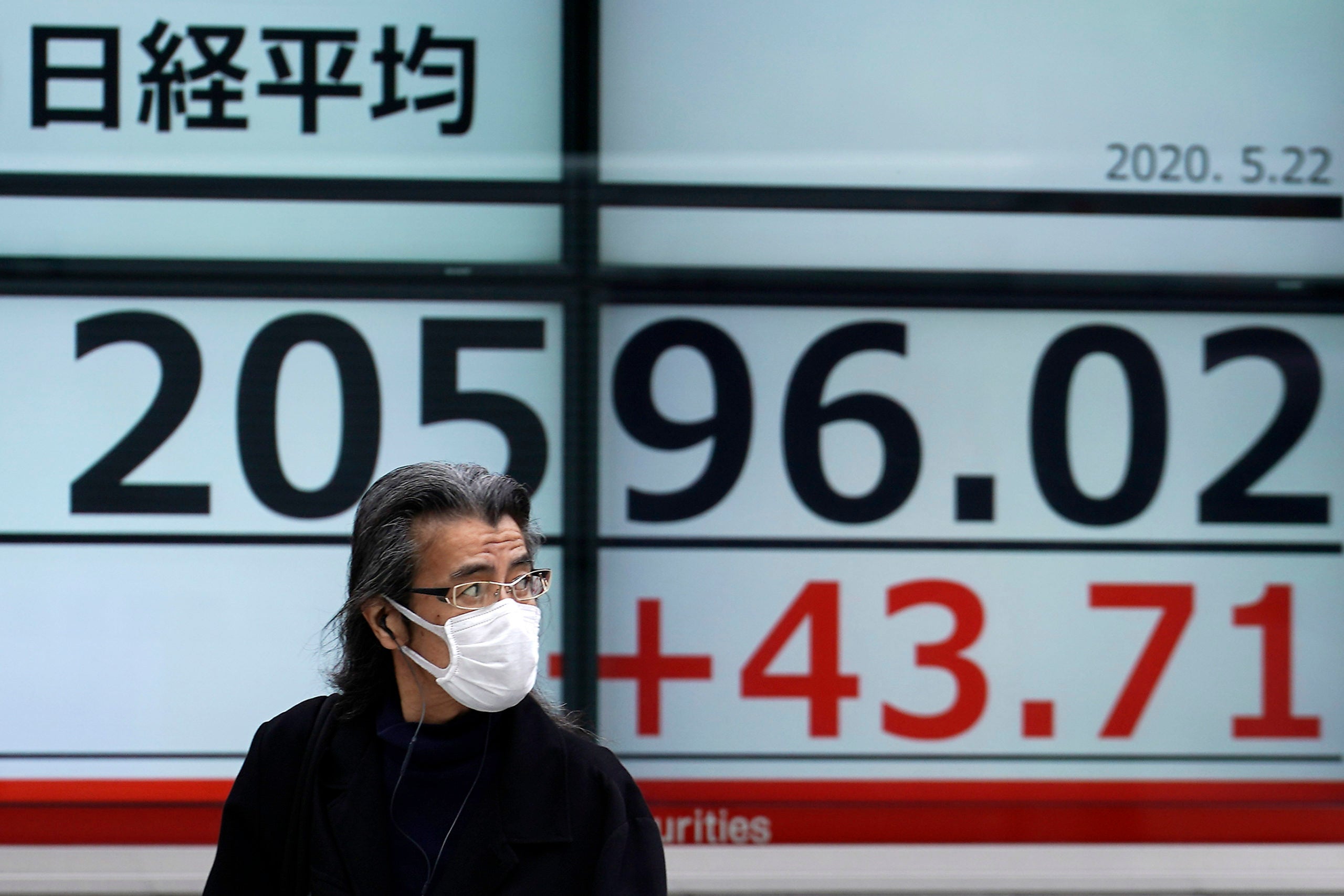 A man walks past an electronic stock board showing Japan’s Nikkei 225 index at a securities firm in Tokyo Friday, May 22, 2020. Shares are slipping in Asia as tensions flare between the U.S. and China and as more job losses add to the economic fallout from the coronavirus pandemic. (AP Photo/Eugene Hoshiko)

BANGKOK — Shares slipped in Europe and Asia on Friday, led by a nearly 6% decline in Hong Kong after communist leaders in Beijing proposed legislation that could limit opposition activity in the former British colony.

For now, flaring tensions between the U.S. and China over Hong Kong and other issues appear to have eclipsed optimism over moves to reopen many economies stalled by the coronavirus pandemic.

China’s National People’s Congress opened its annual session in Beijing and Premier Li Keqiang delivered a work report that promised 2 trillion yuan ($280 billion) in support for local governments to help them fight the pandemic and create jobs as the country struggles to revive growth.

Li told the gathering that Beijing would set no economic growth target in order to focus on fighting the disease. He warned that the battle against the pandemic isn’t over and urged the country to “redouble our efforts” to revive the economy.

Beijing’s move to take over long-stalled efforts to enact national security legislation in semi-autonomous Hong Kong spooked investors who have endured months of pro-democracy demonstrations last year that at times descended into violence between police and protesters.

The proposed bill is aimed at forbidding secessionist and subversive activity, as well as foreign interference and terrorism. Such proposals are certain to be approved by the largely ceremonial parliament.

“Traders around the world are playing the waiting game to see details of the new Hong Kong law to gauge how severe the terms are,” Stephen Innes of AxiCorp said in a commentary.

More specifically, he said, attention is on the U.S. response to the possible impact on Hong Kong’s special economic status. Under the terms of Britain’s handover of control of the territory to Beijing, the city kept its own trade regime and finances and a legal system based on western-style civil liberties not enjoyed elsewhere in China.

The proposal, one of the most controversial items on the Chinese legislative agenda in years, has drawn strong rebukes from the U.S. government and rights groups. On Thursday, the White House issued a report attacking Beijing’s economic policies and human rights violations, expanding on get-tough rhetoric President Donald Trump expects to resonate with voters ahead of the election in November.

Elsewhere in Asia, Japan’s Nikkei 225 index fell 0.8% to 20,388.16 despite a pledge from the Bank of Japan to devote $280 billion to banks for financing small and medium-size businesses battling economic hardships brought on by the coronavirus pandemic. The central bank said it will start providing the zero-interest, unsecured loans in June, expanding earlier stimulus measures.

India’s Sensex declined 1.2% after the central bank cut the benchmark interest rate to 4%, the lowest level in a decade, as its governor forecast the economy would fall into a contraction this year.

Overnight, there was further gloomy news on job losses, with the U.S. Labor Department saying the number of people thrown out of work since the virus struck has climbed to nearly 39 million.

Despite a week of uneven finishes, Wall Street looks set to recoup its losses from last week after a strong rally on Monday that reversed all of the market’s losses for the month. The index is still down about 13% from its high in February.

Crude oil started the year at about $60 a barrel but plummeted earlier this year as demand sank due to widespread travel and business shutdowns related to the coronavirus. The price has risen this month as oil-producing nations cut back on output and the gradual reopening of economies around the globe have driven up demand.

The yield on the 10-year Treasury note, a benchmark for interest rates on many consumer loans, fell to 0.64% from 0.66% late Thursday.