BIR: No Pogos can resume operations as not one has fully paid taxes 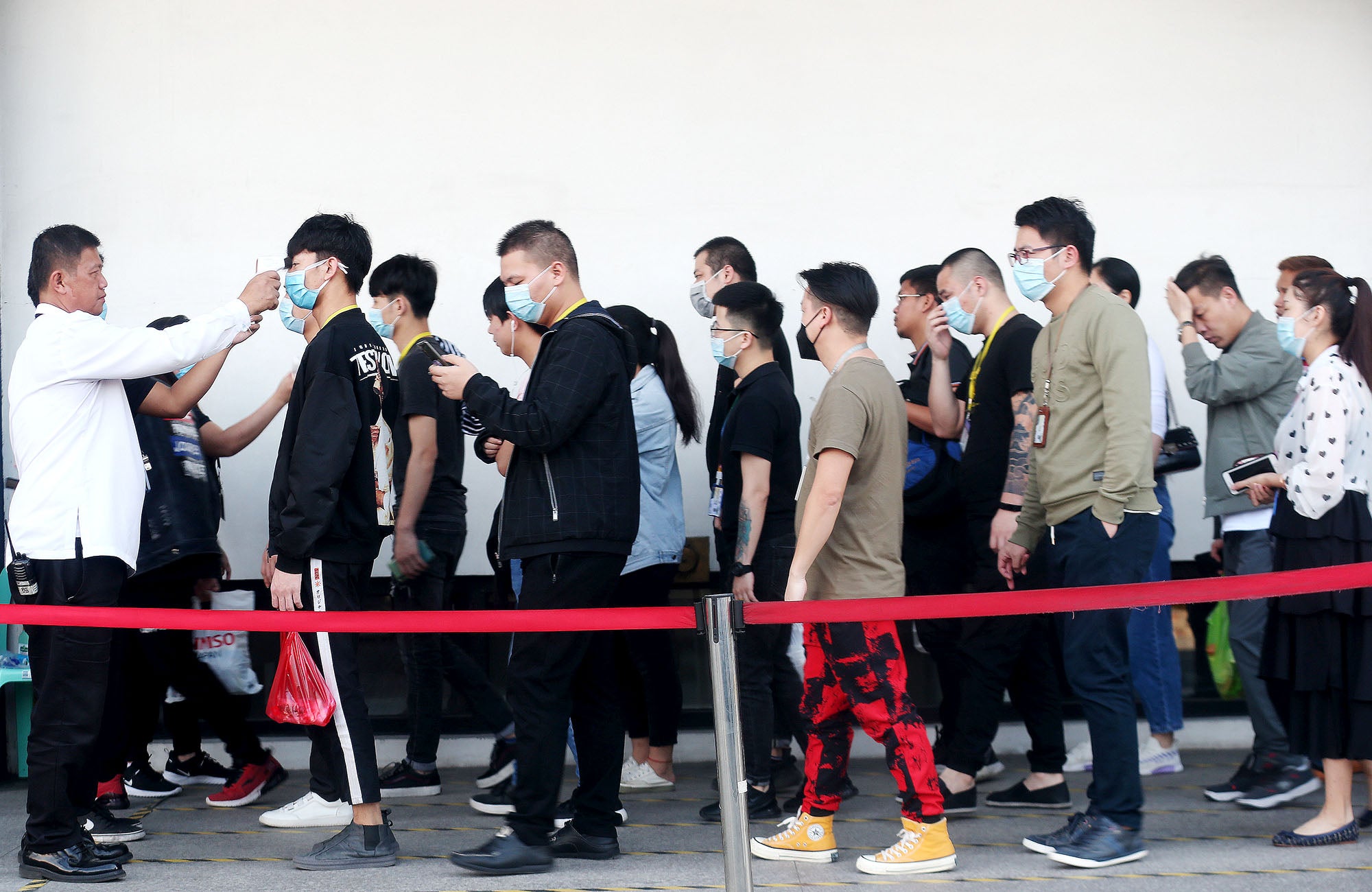 SAFETY REGULATIONS In this Feb. 5 photo, about a month before the lockdown, Chinese workers have their temperature checked as they enter an office building in Parañaque City. —RICHARD A. REYES

Three weeks after the government announced that Philippine offshore gaming operators (Pogos) or any of their service providers would be allowed to resume their activities, not one of them has fully paid their tax obligations as part of “stringent conditions” to restart online gambling during the COVID-19 lockdown, according to the Bureau of Internal Revenue (BIR).

As a consequence, any Pogo or service provider that is found to be operating at this time will be deemed illegal and will be shut down by the authorities, Arnel Guballa, BIR deputy commissioner and Pogo task force head, told the Inquirer on Thursday.

Guballa said it would ultimately be up to Pogos when they could resume operations. The earlier they paid all their tax deficiencies, the sooner they will be granted BIR clearances, he said.

Pogos, which cater mostly to online gamblers in China, were shut down after the enhanced community quarantine (ECQ) was imposed on Luzon in mid-March.

Guballa declined to say how much taxes these Pogos owed the government.

About 60 Pogos had been licensed to operate by the state-run regulator Philippine Amusement and Gaming Corp. (Pagcor). There are 218 Pogo service providers registered with the BIR and employing over 108,000 foreigners, mostly Chinese.

On May 6, the BIR issued the specific tax guidelines and requirements before Pogos and their service providers could obtain clearance to resume operations.

As of Thursday, Pogos were “still in the process of complying with the requirements, including payments,” Guballa said.

The Department of Finance (DOF) had said the BIR was “making sure that Pogos and their respective service providers are properly registered and will pay the correct amount of income taxes and franchise fees to the government before they are allowed to resume operations during the quarantine period.”

Pogos should first show proof that they had paid their 2019 franchise taxes, withholding taxes from January to April this year, and the first quarter payments of their 2020 franchise tax before they are given tax clearances, the DOF said.It imposed similar requirements on Pogo service providers, plus a 25-percent final withholding tax due from their foreign employees before they, too, could be given tax clearances by the BIR.

But the DOF warned that even tax-compliant service providers would not be issued tax clearances if their Pogos or licensees failed to comply with the requirements.

“All Pogo licensees, operators and service providers should also submit a notarized undertaking affirming their commitment to pay all tax arrears for prior years of their operations and should be registered with the respective revenue district office having jurisdiction over their places of business,” the DOF said.

The BIR required Pogos and service providers to disclose the monthly regulatory fees they paid to Pagcor in the past years.

On May 1, Pagcor and Malacañang announced that Pogos, which they classified as business process outsourcing (BPO) companies, would resume operation but with only 30 percent of their workforce.

According to Pagcor chief Andrea Domingo, the suspension of Pogo operations deprived the government of P600 million in monthly earnings, money that could help augment funds to combat COVID-19.

In addition to paying all their tax obligations, Pogos must show readiness to implement safety protocols on their employees to protect them from the coronavirus and to avoid its spread in their communities.

Workers must also first test negative for SARS-CoV-2, the virus that causes the severe respiratory disease, by a testing center accredited by the Food and Drug Administration (FDA).

On Wednesday, the Department of Labor and Employment (Dole) required foreigners employed by Pogos to present proof that the company they were working for had been allowed to operate by Pagcor.

In an advisory on Wednesday, the Dole specifically cited the case of foreign Pogo workers applying for an alien employment permit (AEP).

“For Pogos and related establishments, in addition to the documentary requirements for the issuance of AEPs, the applicant shall also submit copy of recent Pagcor authorization to operate, as proof that the Pogo establishment is authorized to resume operations,” according to Labor Advisory No. 19-2020.

An AEP, which is valid for one year, is required of all foreigners working legally in the country. It is issued to a foreigner only if there is no Filipino who is competent or willing to do the job.

The advisory said the Dole’s regional offices could issue their own internal guidelines on accepting and releasing AEP applications, including using existing online systems or emails.

The Dole “higly encouraged” the use of courier services to deliver the AEP cards but “at the expense of the applicants or their employers.”

Those arrested during the raid on the clandestine hospital at Fontana Leisure Park inside the Clark Freeport Zone earlier this week would be charged with practicing medicine without a license and dispensing medicines not registered with the FDA.