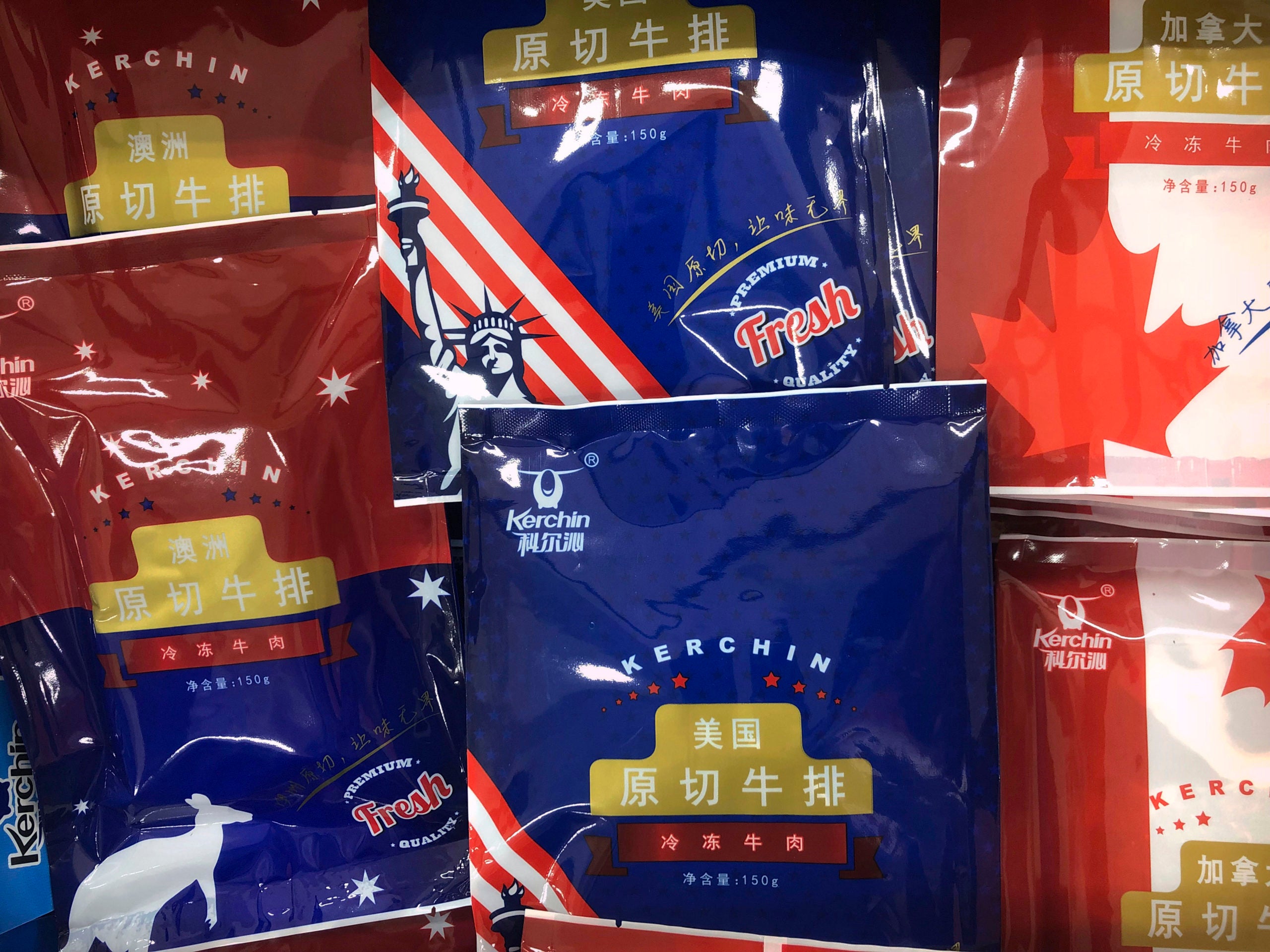 In this May 14, 2019 photo, packages of frozen beef filets from Australia, left, the United States, center, and Canada, right, are for sale at a supermarket in Beijing. China has too much at stake to destroy its trading relationship with Australia entirely but is using sanctions to send a sharp warning to the South Pacific nation about its calls for a robust coronavirus inquiry, an expert says. China has suspended beef imports from four Australian slaughterhouses and is threatening to impose huge tariffs on barley after Australia called for an independent inquiry into the origins of the virus. (AP Photo/Mark Schiefelbein)

Beijing has blocked some imports of Australian beef after Prime Minister Scott Morrison’s government, endorsed by Washington, called for a robust inquiry into the origins of the outbreak and rebuffed Chinese demands to back off.

The move is the first time Beijing has used access to its huge markets as leverage in its campaign to deflect blame for the outbreak. But it has used the tactic regularly against governments from Norway to Canada in political disputes over the past decade.

“What China is really doing is sending a political shot across the bows,” said Peter Jennings, the executive director of the Australian Strategic Policy Institute, a think tank. “They’re saying to Australia:

‘Don’t make a fuss about an open and independent investigation.'”

China has too much at stake to destroy its trading relationship with Australia entirely, Jennings said, and has left alone its biggest Australian imports like iron ore and coal because it needs a reliable supplier.

Beijing has suspended beef imports from four Australian slaughterhouses, however, and is threatening huge tariffs on barley in moves it says are simply about regulations.

But Australia is not backing down.

“We are standing our ground on our values and the things that we know are always important,” Australian Prime Minister Scott Morrison told reporters Friday.

He said Australia draws clear lines on certain issues “And those things are not to be traded, ever.”

China’s Foreign Minister Wang Yi was quoted by the official Xinhua News Agency as saying foreign politicians had “insisted on politicizing the epidemic, labeling the virus, and smearing the World Health Organization” and that China should be lauded for bringing the outbreak there under control and helping other countries.

China state-owned newspaper the Global Times this week said unfriendly moves by the Morrison government had thrown the relationship into the deep freeze.

“You can’t have your cake and eat it, too, is a proverb that could be of use to some Australian officials, who continue to escalate tensions with China while hoping bilateral trade will remain intact,” the Times wrote.

The relationship between the countries has been rocky since 2018 when Australia blocked Chinese-owned tech company Huawei from rolling out a new 5G network, citing security concerns. Last year, China suspended imports of Australian coal after Australia’s government rescinded a visa for a prominent Chinese businessman.

Tensions have also flared over concern over Chinese political influence.

Zhao Lijian, a spokesperson for China’s foreign ministry, said the suspension on the beef imports was simply to protect consumers after the Australian companies “violated the inspection and quarantine requirements.”

Chinese officials routinely refuse to confirm a trade disruption is related to a political clash but make it clear Beijing wants concessions.

In 2019, Beijing blocked imports of canola as it stepped up pressure for Canada to release a Huawei executive who was detained on U.S. charges. The Chinese government said it found pests in Canadian shipments, which the suppliers said was unlikely.

China began blocking imports of Philippine bananas in 2012 in a dispute over territory in the South China Sea. Beijing lifted import curbs only after Philippine President Rodrigo Duterte launched a diplomatic campaign to increase trade, political, and investment ties with China.

And in 2010, China blocked imports of Norwegian salmon and canceled trade talks after dissident Liu Xiaobo was awarded the Nobel Peace Prize by an independent committee appointed by Norway’s parliament.

But even as it imposes sanctions on certain Australian goods, China has been buying more of others as its factories swing back into action following lockdowns. Jennings said the bump may only be temporary and the real threat to Australian exports could come from a prolonged global recession.

Read Next
New normal for insurance products: Online sales until Dec. 31
EDITORS' PICK
DOH: Booster doses for fully vaxxed adults to start December 3
CHR hopes inequalities exposed by COVID-19 pandemic are addressed
Legarda: Ending Violence Against Women, a cause for all
This new condo in the South will make you want to turn a new leaf
Smart offers wireless fiber-like speeds to Filipino homes with country’s first 5G Prepaid Home WiFi
BOQ monitoring 64 travelers from ‘red-list’ countries amid Omicron
MOST READ
Another disqualification petition filed against Bongbong Marcos
DOH: Booster doses for fully vaxxed adults to start December 3
Ex-DOT chief Ace Durano convicted of graft over 2009 project
Roque defends Bongbong Marcos: ‘He was only 15 years old in 1972’
Don't miss out on the latest news and information.