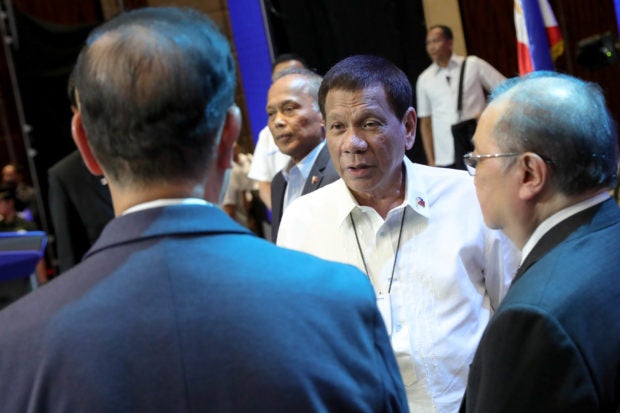 The local stock barometer outperformed regional markets on Tuesday as Pres. Rodrigo Duterte’s peace offering to the Ayala and Metro Pacific groups eased concerns on regulatory risk that bludgeoned local equities even before the COVID-19 pandemic.

The day’s most actively traded company was AC, which gained 14.73 percent, while MPIC rallied by 13.55 percent.

“Ayala Corp. and Metro Pacific reacted positively to the President’s friendly gesture last night. It was taken as catalyst of a reversal of sentiment for the said firms, who were the targets of the President’s tirade recently,” said Jose Vistan, head of research at local brokerage house AB Capital Securities.

“Having government and companies potentially now working on the same page is a plus for the market. It reduces market risk premiums and hopefully improves the ease of doing business going forward,” Vistan said.

Outside the PSEi, Ayala-led Manila Water was one notable gainer, surging by 12.05 percent.

“We saw surprising foreign inflows today with P86.52 million worth of net buying. It is not much but it ends more than 20 days of consecutive net selling,” said Christopher Mangun, head of research at AAA Equities.

“Positive comments from President Duterte in his speech last night toward several business leaders improved the general sentiment and increased optimism, pushing the PSEi higher today…Investors cheered the renewed cooperation between government and the private sector which overshadowed concerns of geopolitical tensions abroad,” he said.

Before the COVID-19 pandemic, Mr. Duterte launched a series of tirades against Manila Water and MPIC’s Maynilad, leading to the cancellation of these firms’ 15-year contract extension beyond 2022.

On Monday night, Mr. Duterte apologized to the Zobel brothers and MPIC chair Manuel V. Pangilinan for “hurtful” words earlier issued against these tycoons. The president also thanked them for helping the country during this state of national public health emergency.

The holding counter racked up 3.29 percent, driven by the gains of AC and MPIC, while the industrial counter added 2.11 percent.

The property counter firmed up by 1.36 percent, while the financial and mining/oil counters both added less than 1 percent.

Value turnover for the day amounted to P6.43 billion. There were 118 advancers that edged out 74 decliners, while 38 stocks were unchanged.