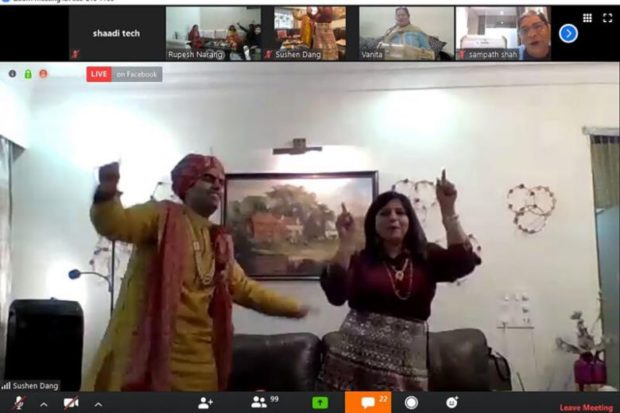 Mr Sushen Dang (left) and Ms Keerti Dang (not in picture) had a virtual wedding. While Mr Dang was present in Mumbai, Ms Narang logged in from Bareilly more than 1,400 kilometres away. PHOTO: SHAADI.COM via The Straits Times/Asia News Network

NEW DELHI — The couple were counting down the days until their April 19 wedding at a resort near the Jim Corbett National Park in northern India. Hotel rooms had been booked, the 300- strong guest list had been finalized and the gifts had been bought.

“Everything was planned and taken care of,” said Mr Sushen Dang, a Toronto-based 26-year-old market analyst, who was scheduled to wed Ms Keerti Narang, 25, a make-up artist from Bareilly, Uttar Pradesh.

“Corbett was going to be an altogether different experience, amid nature and with colorful setups,” he added.

But the Covid-19 pandemic threw a spanner in the works, forcing them to call off the wedding around mid-March. “We had no clue what to do next,” Mr Dang told The Straits Times from Mumbai, where he is currently staying with his parents.

Then one of his friends told him about an online wedding initiative launched by Indian online matchmaking platform Shaadi.com for couples who wanted to get married during the ongoing countrywide lockdown.

While the couple had been legally wed in a civil ceremony at a court in February, the idea of an online wedding appealed to them: It would still occur on April 19, a date deemed auspicious for the couple.

And so the wedding went ahead online that day, with Mr Dang in his wedding finery logging in from Mumbai and Ms Narang appearing in her trousseau from Bareilly, more than 1,400km away.

Three hundred guests, a hired musician and the Hindu priest who led the ceremony crowded Zoom’s virtual room. The ceremony was also streamed live on Facebook and has collected more than 264,000 views.

An online wedding is an option for Indians who had expected to marry this year but are now being forced to reconsider their plans. As an example, 12 Muslim couples in the state of Madhya Pradesh got married amid the lockdown on April 17 through a video conference led by a religious official.

“A wedding is the single biggest day of their lives for a lot of people and many were heartbroken to have their plans derailed,” Mr Adhish Zaveri, the director of marketing for Shaadi.com, told The Straits Times. “We thought of offering a way for people to get married without leaving their homes but with the same level of emotions and celebration,” he said.

The firm has organized two online weddings so far – a third has been finalized for May 8 – and has been getting a “steady stream of requests” for its “Weddings From Home” initiative.

This type of initiative might offer some hope, but weddings in India are unlikely to reclaim their famed glitz and scale any time soon.

Social distancing norms are likely to curtail the number of attendees beyond the lockdown period and the prolonged economic downturn is bound to keep weddings less glamorous, at least for the near future.

“Nobody has a sense of when they will be able to do a large-scale wedding again,” added Mr Zaveri.

The Indian wedding industry, valued at more than $70.8 billion annually, has been hit especially hard. Mr Piyush Goyal, a wedding planner based in Agra, would organize around 30 big-ticket weddings every year with budgets running up to 10 million rupees (S$187,000) each and “countless” other lower-budget weddings.

But he organized only three weddings this year, all in January. An anniversary party on March 8 was the last event he planned.

“Since then, I have had to cancel six weddings,” said Mr Goyal, the co-founding partner of Attractive Celebration Eventz, adding that he has no hope for a revival this year.

“Clients are unwilling to discuss anything when I call them to check on their plans.”

This situation has even forced him to reconsider his business and explore the idea of setting up a grocery instead. “People can’t do without food, can they?” he added.

The weddings he normally organized generated employment for around 200 people, including florists, decorators, musicians, dancers and waiters.

Mr Vineet Bhatt, 23, who played the dhol, a double-headed percussion drum, at some of these weddings, earned around 800 rupees per event. The last wedding he performed at was on March 12.

Having been out of work for nearly two months, his family of drummers in Delhi are now staring at a bleak future.

“We have food rations left for just another two or three days and no savings at all,” Mr Bhatt said.

They hope things will begin looking up soon as the wedding season in northern India ends in July and starts again in November.

The family is also exploring the idea of  running a small business, perhaps a pushcart to sell lassi.

Mr Dang and Ms Narang, on the other hand, are hoping to make up for the wedding they missed with a big bash on their first anniversary next April. “Hopefully, things will have returned to normal by then,” said Mr Dang.