BANGKOK  — Shares were mixed in Asia on Monday after China cut a key interest rate to help cushion the impact of the pandemic on its economy. 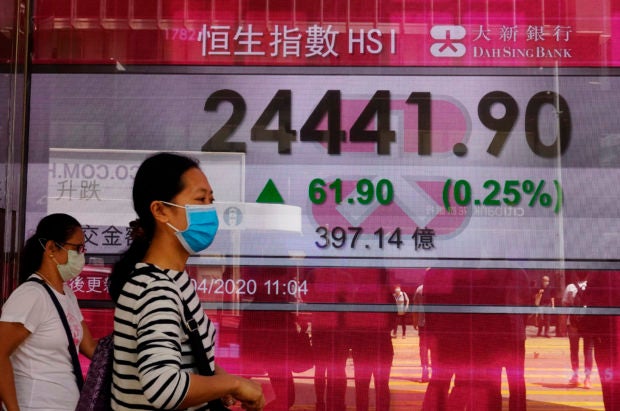 Benchmarks rose Monday in Hong Kong and Shanghai but fell in Tokyo. Oil prices were lower.

A fresh crop of grim economic data is expected this week after a worldwide rally on Friday that pushed the S&P 500 up 2.7%.
Japan reported Monday that its exports fell nearly 12% in March from a year earlier as shipments to its two biggest markets, the U.S. and China, slipped.

Providing a lift for Chinese markets, banks cut the benchmark interest rate, called the 1-year loan prime rate, by 0.20 basis points to 3.85%, seeking to boost the economy after it contracted by 6.8% in the first quarter of the year.

The 5-year loan prime rate was cut by 10 basis points to 4.65%. The cuts came as no surprise given the economic shock of the last quarter, the worst downturn since perhaps the 1965-75 Cultural Revolution.

The People’s Bank of China paved the way for the monetary easing last week by reducing by 0.2% a rate called the medium term lending facility, which forms the basis for the loan prime rate. The cuts reduce short-term borrowing costs for banks.

China’s central bank has used various targeted moves to ease the pandemic’s blow to the economy. “As employment conditions remain weak and external demand is being held back by lockdowns elsewhere in the world, we think the People’s Bank will take further steps to prop up activity,” economists at Capital Economics said in a commentary.

Friday’s rally was driven by wisps of optimism over reports on early progress in a possible treatment for the coronavirus and moves by President Donald Trump to nudge states toward reopening businesses and other activities shut down to help stem the spread of the pandemic, which has killed more than 165,000 people and infected at least 2.4 million worldwide, 760,000 of them in the U.S.

Treasury yields remained extremely low. The yield on the 10-year Treasury was steady at 0.64%. It started the year near 1.90%. Bond yields drop when their prices rise, and investors tend to buy Treasurys when they’re worried about the economy.

The market’s gains were widespread Friday, across all 11 sectors that comprise the S&P 500, which has climbed more than 27% since hitting a low on March 23.

The most recent gains have been powered by hopes that the pandemic may be leveling off in some of the world’s hardest-hit areas. The rally started after the U.S. government and Federal Reserve promised massive aid for the economy.

But the S&P 500 is still down roughly 16% from the record set in February as numbers roll in and show the cataclysmic damage being done to the economy.

Roughly 22 million U.S. workers have lost their jobs in the last month as businesses shut down.

Banks are bracing for consumers and businesses to default on billions of dollars in loans, and no one can say for sure when the economy will get back to anything approximating “normal.”

In other trading, benchmark U.S. crude lost $1.32 to $23.71 per barrel in electronic trading on the New York Mercantile Exchange.