Stocks fall as investors brace for earnings hit from virus

Stocks fell on Wall Street Monday, erasing some of the market’s big gains from last week, as investors braced for a sobering first look at how the coronavirus pandemic has hurt company earnings. 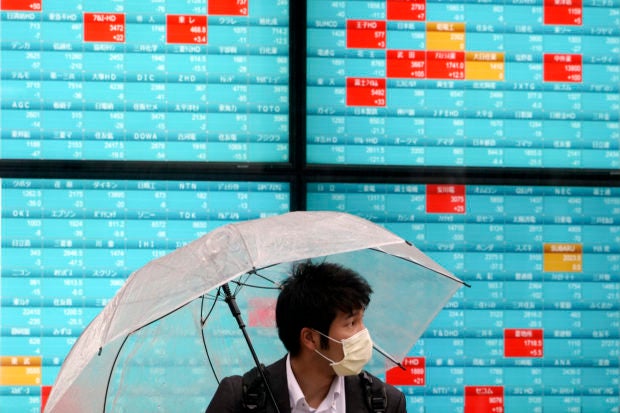 A man with a protective mask stands in the rain in front of an electronic stock board showing Japan’s Nikkei 225 index at a securities firm in Tokyo Monday, April 13, 2020. Asian shares fell Monday amid absence of fresh news after U.S. markets were closed for Good Friday and European, Australian and Hong Kong trading continued to be closed for Easter holidays. (AP Photo/Eugene Hoshiko)

The S&P 500 fell 1% after cutting its early losses by more than half toward the end of the day. The benchmark index surged 12% last week, its best gain since 1974.

The pullback followed news over the weekend that OPEC, Russia and other oil producing nations have agreed to cut output in a bid to stem a slide in crude prices following a collapse in demand due to the outbreak.

Financial, industrial and health care stocks took some of the heaviest selling. Amazon and a few other retailers were bright spots. Traders continued to watch for more signs that the coronavirus outbreak may be leveling off and what that could mean for the prospects of reopening the economy.

Cautious optimism that the outbreak has begun to plateau in some of the worst-hit areas and another big infusion of economic support by the Federal Reserve helped spur last week’s big rally.

This week, stocks could be in for more volatility as companies report results for the first quarter, though analysts will be focused primarily on what management teams have to say about what the rest of the year looks like.

Details may be hard to come by, as many companies have ceased giving earnings forecasts because of the uncertainty over when government officials will determine it’s safe to roll back the social distancing and stay-at-home mandates that have all but ground the economy to a halt.

“The companies don’t know what demand is going to be over the next three months or over the next six months,” said Willie Delwiche, investment strategist at Baird.

European markets were closed for a holiday, and Asian markets ended mostly lower.

Bond prices fell. The yield on the 10-year Treasury to 0.75% from 0.72% late Thursday. U.S. markets were closed last Friday for the Good Friday holiday.

Several major banks, including JPMorgan Chase, Wells Fargo and Bank of America, and big companies, including UnitedHealth Group, Johnson & Johnson and Rite Aid, are on deck to report results this week.

Analysts predict that earnings for all the companies in the S&P 500 will be down 9% in the first quarter from a year earlier, according to FactSet. That would be the biggest annual decline in earnings for the index since the third quarter of 2009 when earnings slumped nearly 16%.

“Our view is its one big write-off year,” said Keith Lerner, chief market strategist at SunTrust Advisory Services. “The market is going to start thinking more about 2021, 2022. On the other side of this, what does that business look like?”

The closure of businesses and mandates for people to stay home have forced a record number of Americans out of work and raised the possibility that many businesses could end up bankrupt.

That has many investors anticipating what may be the worst recession since the Great Depression.

Investors have been focused on the trajectory of the coronavirus for clues as to how pronounced the economic fallout will be. Despite some positive signs — the death toll in New York on Sunday dipped below 700 for the first time in a week — the overall data indicate that the number of new cases continues to increase.

There are more than 1.86 million confirmed cases worldwide, led by the United States with more than 557,000, according to a tally by Johns Hopkins University.

Traders are trying to gauge when shutdowns in many countries might ease. Comments by Dr. Anthony Fauci, the top infectious disease expert in the U.S., have raised hopes. He has said some parts of the U.S. might be able to reopen as early as next month, while warning that much remains uncertain.

China has begun, cautiously, to reopen activity in regions such as Wuhan and surrounding Hubei province that were shut down during the worst of its outbreak.

After last week’s big move up, stocks are likely moving into a trading range reflecting a tug of war between investors’ hopes for a recovery and concerns about the extent of the damage to the economy. Quick actions by the Fed and the $2 trillion economic aid package from the government have eased some of investors’ concerns.

Oil prices got a brief boost following the decision by OPEC and other oil producers over the weekend to cut production by nearly 10 million barrels a day, or a tenth of global supply, beginning May 1.

Analysts said the cuts were not enough to make up for the void in demand due to business and travel shutdowns due to the coronavirus. But the deal at least helped resolve a price war that took U.S. crude to near $20 per barrel, pummeling U.S. oil and gas producers.

Brent, the international standard, rose 26 cents to close at $31.74 a barrel on Monday.