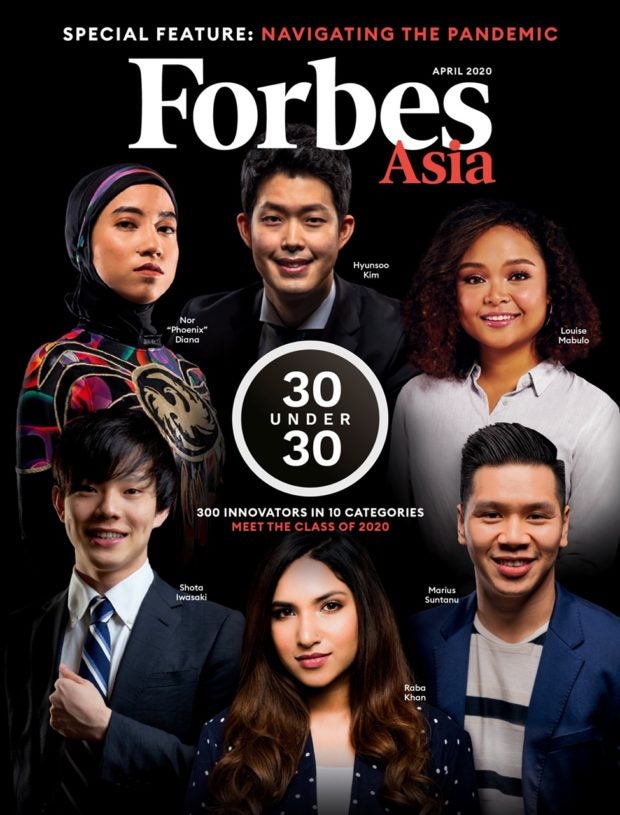 Five young Filipinos landed on Forbes Asia magazine’s “30 Under 30″ list for 2020, described as a cohort of bright and innovative leaders under the age of 30 who are “challenging conventional wisdom and rewriting the rules for the next generation.”

“This year’s Forbes 30 Under 30 Asia list-makers inspire optimism in what is promising to be a tough year ahead. They are a resilient and energetic bunch who are facing challenges head-on and actively working for a future that matches their aspirations,” Forbes 30 under 30 Asian editor Rana Wehbe said on Thursday.

Mabulo is a 21-year-old farming advocate from San Fernando, Pampanga who provides farmers in the Philippines with cacao plant seedlings and teaches them how to responsibly and sustainably produce cacao. To date, The Cacao Project has helped more than 200 farmers plant 80,000 trees.

The project aids reforestation efforts and has helped with the revival of two water sources from increased water retention in soil. In addition to cacao, the project provides farmers with other crops, such as bok choy, okra and pumpkins to intercrop with the cacao and maintain soil fertility, Forbes reported.

Mabulo had earlier been recognized as a “Young Champion of the Earth 2019” by the United Nations Environment Programme.

Yulo, a 20,-year-old gymnast, was the first male athlete in Southeast Asia to win a gold medal at the World Artistic Gymnastics Championships in 2019. His debut appearance at the 2019 Southeast Asian Games had also earned him two gold and five silver medals. He is set to compete at the upcoming Olympic Games in Tokyo.

Didal, 20, bagged one out of the Philippines’ four gold medals during the 2018 Asian Games in 2018 as a champion of the women’s street skateboarding event. She had also won a bronze medal at the first-ever Women’s Open at the annual Tampa Pro competition in Florida. She is preparing to qualify for the upcoming Olympic Games in Tokyo.

Davao-based Harani is a 28-year-old filmmaker, photographer and digital artist who uses his work to raise awareness on social issues such as diversity, migration, environment and culture. He founded Alexandrite Pictures, an independent studio that produces multimedia works for advocacy, commercial and on a commission basis. Harani is the recipient of multiple awards, including the JCS International Young Creatives Award Winner 2019 by the International Academy of Television Arts & Sciences.

Wehbe added: “Young women under 21 especially stand out in our 2020 list: From Malaysia’s hijab-wearing wrestler to Bangladesh’s first female comedian and a social entrepreneur helping farmers in the Philippines improve their livelihoods – these fierce gamechangers are shattering gender, age and cultural stereotypes across industries.”

The complete list of honorees is available at Forbes Asia.