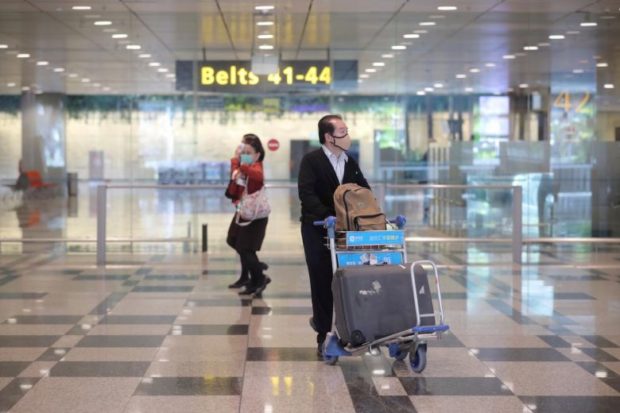 The air transport, accommodation, food services and retail trade sectors shrank on the back of a sharp decline in tourist arrivals. ST PHOTO: GAVIN FOO

SINGAPORE – Singapore’s economy looks headed for its first full-year recession in about two decades amid mounting border controls and lockdowns around the world from the escalating coronavirus outbreak after the Ministry of Trade and Industry (MTI) on Thursday (March 26) forecast a sharp contraction this year.

The MTI downgraded its 2020 growth forecast to a range of -4.0 to -1.0 percent this year, from an earlier estimate of -0.5 percent to 1.5 percent. The last time Singapore registered a full-year contraction of its economy was in 2001 during the Dot.com Bust when growth fell by 1 percent.

The outlook was slashed after advance gross domestic product (GDP) growth estimates showed the economy contracting by 2.2 percent year on year in the first quarter of this year, worse than economists had expected.

“Taking into account the weaker-than-expected performance of the Singapore economy in the first quarter, and the sharp deterioration in the external and domestic economic environment since February, the GDP growth forecast for 2020 is further downgraded,” the MTI said.

DBS senior economist Irvin Seah said Singapore was in for “a very deep recession”. He noted that the 2.2 percent first-quarter contraction is the worst year-on-year decline since the global financial crisis.

On a quarter-on-quarter annualised basis, the economy shrank by 10.6 percent in the January to March period, a magnitude unseen since the third quarter of 2010 and a sharp pullback from 0.6 percent growth in the previous quarter.

Mr Seah said he is slashing his 2020 GDP growth forecast down to -2.8 percent from -0.5 per cent in light of Singapore’s latest coronavirus measures, as well as risks to the global economy. This will be deeper than the recession during the Asian Financial Crisis when the economy contracted by 2.2 percent.

“In fact, this could well be the worst recession ever on record for Singapore,” he said. GDP growth figures for the next two quarters will likely be even deeper than the first quarter, with declines of more than 3.5 percent, he added.

For the first quarter, the construction sector led the decline with a contraction of 4.3 percent year on year, followed by the services (-3.1 percent) and manufacturing (-0.5 percent).

“With the services sector accounting for about the two-thirds of GDP and employment, the main drag is still services,” said Mr Seah. “If the services sector falls, the economy follows. Even an improvement in the manufacturing sector in the coming quarters will not be enough to offset the drag.

“This will be a services-led full year recession. And the impact to jobs will be significant,” he said.

The first quarter performance reversed the 1.0 percent growth in the last three months of 2019 and was far deeper than the worst hit during the Sars (severe acute respiratory syndrome) period when the economy contracted by 0.3 percent in the second quarter of 2003.

Deputy Prime Minister Heng Swee Keat is set to announce a supplementary Budget in Parliament on Thursday and detail additional support measures to help workers, businesses and households cope. This will be on top of a $4 billion package rolled out last month.

Fitch Solutions Country Risk and Industry Research, which like DBS cut it’s full-year growth forecast to -2.8 percent, said: “We expect the government to mount a determined policy response, with the possibility of borrowing against past reserves.” But risks are still weighted to the downside, given the possibility of a worsening outbreak in Singapore and the risk of the global pandemic not being contained within a quarter, it added

The MTI said the 2020 outlook had sharply deteriorated after the virus outbreak rapidly escalated beyond China to many other countries, including the United States, Britain, France and Germany.

With the outbreak becoming more widespread, Singapore has tightened its border controls significantly since February to reduce the importation of the disease.

To reduce the risk of community spread, safe distancing measures such as the cancellation of all events and mass gatherings and the physical separation of patrons at public places have been implemented.

All of these factors have heavily weighed on domestic consumption and external demand for goods and services, said the MTI.

The MTI said the manufacturing sector was weighed down by output declines in the electronics and chemicals clusters, which more than offset output expansions in the biomedical manufacturing and precision engineering clusters.

The weakness of the sector likely reflects a fall in external demand as global economic activity has slowed due to the ongoing Covid-19 pandemic, it said.

The construction sector’s 4.3 percent contraction was a reversal from the 4.3 percent growth in the previous quarter.

The services producing industries contracted by 3.1 percent on a year-on-year basis in the first quarter, reversing the 1.5 percent growth in the fourth quarter of last year.

The advance GDP estimates for the first quarter were computed largely from data in the first two months of the quarter.

The MTI will release the preliminary GDP estimates for the first quarter, including performance by sectors, sources of growth, inflation, employment and productivity, in its Economic Survey of Singapore in May.