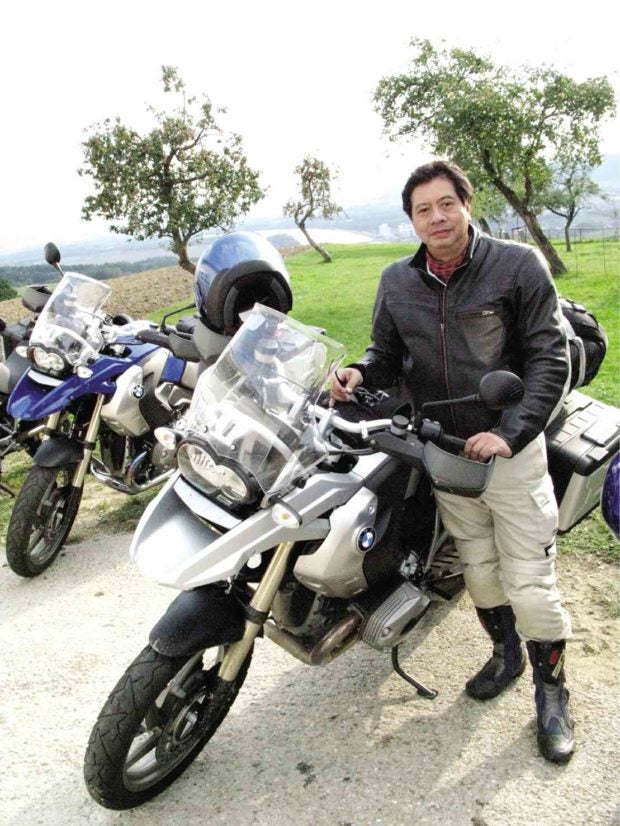 Alan Ortiz – business leader, avid biker and former civil servant – passed away on Monday in a hospital in Paris due to complications from COVID-19. He was 66.

“Dr Alan T. Ortiz – our dearest Alan, beloved father, Kuya to his family, and indulgent Lolo – passed away in the early morning of March 23 due to complications from the COVID-19,” the Ortiz family announced.

Ortiz had fallen ill overseas and was confined for weeks at Hospital Saint-Luis in Paris. He was in Paris upon the invitation of the IHEDN, Institut Des Hautes Etudes De Defense Nationale for a discussion on national security.

“I have known Alan since the 70’s when we were young public servants. I’m privileged to have been friends all these years, fellow raging incrementalists as co-founders of the Foundation for Economic Freedom and fellow riders in our motorcycle club Hombres, and in this journey called life. My wife Amina and I join his family and friends in mourning his passing. He will be greatly missed,” said economist Romeo Bernardo, a close friend.

Ortiz, the president of non-profit Philippine Council for Foreign Relations, was formerly the president of SMC Global Power and the National Transmission Corp. He had also served the Philippine government as assistant director-general of the National Security Council, and vice-chair and chief operating officer of the Development Bank of the Philippines, then concurrent as Undersecretary to the President for the Build-Operate-Transfer (BOT) Center (now PPP Center) and Executive Director of the Coordinating Council of the Philippines Assistance Program (CCPAP).

“I relied on him time and again because of my confidence in his ability to make things happen and happen well. It came as no surprise to me that he continued to succeed in various capacities in the private sector and rise in the esteem of his peers with his incisive and respected views on the nation’s economy and its future in an ever global setting,” said former Finance Secretary Roberto de Ocampo, who had worked with Ortiz at the DBP and the Department of Finance.

“I believe I would be reflecting the views of many others when I pay tribute to his memory as a hardworking man of integrity, keen intelligence, (one) with a knack-even welcome impatience for getting things done, and a heart dedicated to the advancement of his country and the well being of his fellow Filipinos,” he added.

“Alan was a great friend for the 35 years I knew him. I always found Alan a larger than life hero for our times and deeply admired his many visions and passions for the Philippines and the world. He was a game-changer in both his public and private sector careers,” said John Forbes, senior consultant at AmCham Philippines.

Forbes first met Ortiz when the latter worked with then Defense Secretary Rafael Ileto and he got to know him more when he was Undersecretary the Department of Finance handling official development assistance and BOT.

“Later, he took on very important jobs in utilities in water, electricity generation, and transmission. Most recently, he was planning to launch a satellite for telecommunications. I am so grateful that our paths crossed in life and that we were able to work together on many advocacies. His vision, passion, and efforts to do great things never faltered. My family and friends join me in extending deepest condolences to Beng and their children and grandchild Sam,” Forbes said.

Ortiz obtained his AB Economics degree from the Ateneo de Manila University and held a Ph.D. in International Relations (with distinction) from the University of Pennsylvania, specializing in multinational enterprise and economic development at the Wharton School. He topped the 1981 Philippine Foreign Service Officer (FSO) examination.

He was a passionate biker and part of a group of riders called Hombres.

In a 2014 article contributed to the Inquirer, Ortiz had written: “And why does big biking have a particular appeal to CEOs, senior executives and industry leaders? Well, to belabor the obvious, while it looks like a highly individualistic sport, one of its biggest attractions is that big biking is actually the pinnacle of team play. Each biker plays a role in the veritable wolf pack—whether playing the ‘spearhead’ or lead rider, or the ‘sweeper’ or rear guard—the singular objective is team security and the safe arrival at the ride destination. Big biking is a team sport. And like any other team sport there are certain fundamental principles that encourage adventurous individuals to choose to learn how to ride.”