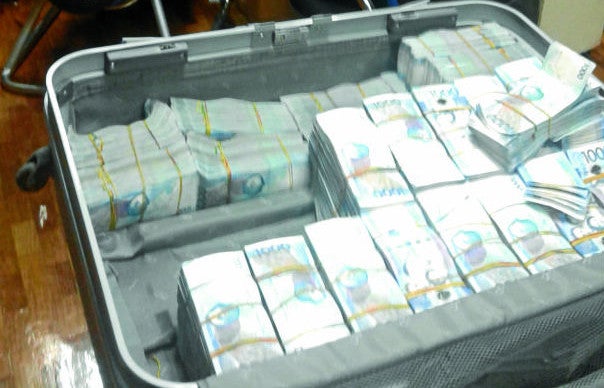 SECOND INSTALLMENT It took personnel of the Anti-Money Laundering Council (AMLC), who used machines, two hours to count the P38.28 million, consisting of P500 and P1,000 bills, that casino junket operator Kim Wong turned over to the AMLC in 2016. CONTRIBUTED PHOTO

A US court has dismissed a civil case filed by Bangladesh Bank against Yuchengco-led Rizal Commercial Banking Corp., certain individuals and firms alleging conspiracy in relation to the $81-million cyber-hacking case and money laundering case in 2016.

Bloomberry Resorts Corp. – the parent firm of Solaire Resort & Casino operator Bloomberry Resorts & Hotels Inc. which is one of the defendants – disclosed to the Philippine Stock Exchange on Monday that the US District Court for the Southern District of New York had dismissed the case.

Citing an opinion and order dated March 20, the US court granted the defendants’ joint motion to dismiss for failure to state a Racketeer Influenced and Corrupt Organizations Act (RICO) claim or RICO conspiracy claim.

The disclosure said that the US Court had “further declined to exercise its supplemental jurisdiction over the remaining state law claims.”

The court, however, denied the defendants’ other joint motions to dismiss the case based on lack of subject matter jurisdiction and having another more suitable forum.

This civil case was meant to collect the amount allegedly lost by Bangladesh Bank to North Korean hackers who broke into its systems and sent multiple remittances orders to their account with the Federal Reserve Bank of New York. Some remittance orders were allowed to be transacted through four correspondent banks in New York, and were remitted to fictitious accounts with RCBC.

After being withdrawn from RCBC, part of the money disappeared in Philippine casinos, where they were used to purchase gaming chips and were played in the casino and junket rooms.