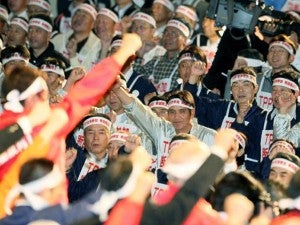 ANTI-TPP PROTEST Some 6,000 farmers raise their fists in the air at a rally against Japan's participation in the Trans-Pacific Partnership (TPP) free trade talks in Tokyo on Tuesday, November 8, 2011. Japanese Prime Minister Yoshihiko Noda is to announce the country will join negotiations on the TPP agreement despite strong opposition from farmers. AFP PHOTO/JIJI PRESS

TOKYO—Thousands of protesters rallied in Tokyo Tuesday against a trans-Pacific trade agreement, as Japan prepares to join US-backed negotiations on the controversial pact.

Prime Minister Yoshihiko Noda is expected to announce later this week the country will enter negotiations for the Trans-Pacific Partnership (TPP) trade framework to gradually abolish tariffs on imports into all member economies.

So far the pact negotiations involve the US, Australia, Brunei, Chile, Malaysia, New Zealand, Peru, Singapore and Vietnam, and Japan would be the second-largest economy in the future TPP if it joined.

But the pact has worried many in Japan, especially farmers who fear that a massive flow of cheap food imports would destroy Japan’s weak agricultural sector.

Japan’s Central Union of Agricultural Cooperatives has campaigned vigorously against participation, saying a deal would reduce food security in a country where farmers – especially of rice – enjoy generous government protection, at the cost of high prices for consumers.

Even Noda’s ruling Democratic Party of Japan (DPJ) is deeply divided over the issue, with some senior members including former farm minister Masahiko Yamada openly against joining the trade agreement.

“What benefit will TPP bring Japan?” said Yamada, one among dozens of ruling and opposition lawmakers who participated in the Tokyo rally, which involved around 6,000 farmers, politicians and consumer groups.

“Is it OK for Japan to help America’s economic hegemony in the Asia-Pacific region?” said Shizuka Kamei, leader of the People’s New Party, a coalition partner of the DPJ.

Major businesses, academics and mainstream media have long pushed Tokyo to join the deal, a move they say will improve access to foreign markets and boost regional trade and investment.

However, an opinion poll by Kyodo News agency released on Sunday showed that the Japanese public is sharply divided over the TPP, with 38.7 percent supporting Tokyo’s participation in the trade negotiations while 36.1 percent are opposed.