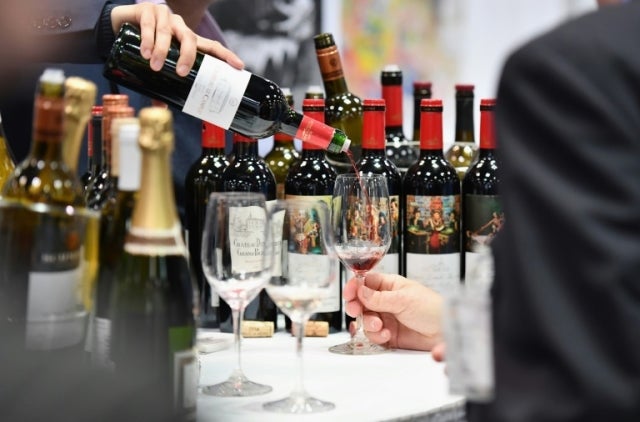 The mood is subdued at this week’s New York Vinexpo, with tariffs and coronavirus among the top concerns. Image: Angela Weiss – AFP

The wine business dodged a bullet last month when the Trump administration held off on draconian European wine tariffs, but at a New York trade fair, the industry was not exactly celebrating.

The spreading coronavirus joined the fog of U.S. commerce policy, the murkiness of the British market post-Brexit and a glut of California wine among the leading buzz-kills at the Vinexpo.

“There’s so much uncertainty,” said Philippe Chainier, who, with the industry facing a confusing series of trade actions and threats by the United States against Europe, has taken heart from his father’s success at navigating the family’s Loire Valley domaine through earlier crises.

It hasn’t acted on that threat following significant lobbying from importers, retailers and other industry figures, but the administration did enact in October a 25% tariff on some wines from France, Germany, Britain and Spain, a levy that in itself has affected strategy and the flow of goods.

The administration is expected to reconsider the 100% tariff later this year, while Trump has also threatened tariffs on champagne following a French tax on U.S. technology giants.

All this comes as the viral epidemic threatens the industry with further disruptions.

Matthews described the wine industry as facing “a lot of headwinds” that would weigh on sales, adding “it’s probably a five-year shakeout.”

Amid the uncertainty, Steve Melchiskey, founder of the importer US Wine West, said his mitigation steps have included more than doubling his wine in storage and negotiating with producers to share the hit from the tariffs.

Melchiskey is also rethinking his import footprint in light of the 25% tariff, which many industry players believe could be in place for some time.

“We’re pivoting to Australia, Chile, Argentina, New Zealand,” said Melchiskey, who is looking to offset lower imports from Loire, Burgundy and some other regions affected by the tariff.

Some producers, Melchiskey added, are coming up with blends close to 14% alcohol to get around the tariffs, though not everyone can do this.

“There’s an existential threat to the countries and the wine styles that are being hit with tariffs right now,” he said. “We are importing less Loire Valley wines than we were, less Burgundy, less cooler-climate French wine.”

Chainier, who grows in the Loire region known for its lighter, sometimes pungent white wines, said he has worked with importers to share the hit from tariffs but can’t adjust production to boost alcohol content. The U.S. is his company’s biggest market after Britain.

“We’re not planning on making wine with more alcohol,” Chainier told AFP. “We want to keep our identity.”

Yet some French producers say the levies have actually boosted their prospects in the US market.

Vignobles Gabriel & Co., which represents about 40 producers in Bordeaux, has prepared literature for customers that lays out its portfolio of wines with more than 14% alcohol content.

“Trump’s tax is truly an opportunity for us,” said Jean-Francois Reaud, director of Vignobles Gabriel & Co.

The U.S. market is currently about 15% of Vignobles sales and includes heavy representation in big-box chain Costco Wholesale. But the group has been harmed by a hit from China, which represents about 10% of sales.

Thus far, Trump’s tariffs have also spared Italy, although winemakers in the country got a bitter taste of the tariff hit in late 2019 as the industry fought against the 100% tariff threat as U.S. importers reduced purchases.

Orders have resumed at normal levels, but the fear among importers lingers, said Mauro Sirri of Celli in the Emilia-Romagna region in Italy.

He pointed to one buyer in North Carolina who has discussed shifting supply away from Europe to other markets not at risk of tariffs.

“When you put in your mind the danger, it will be difficult to leave,” he said. NVG

The impact of spreading virus on businesses and economy