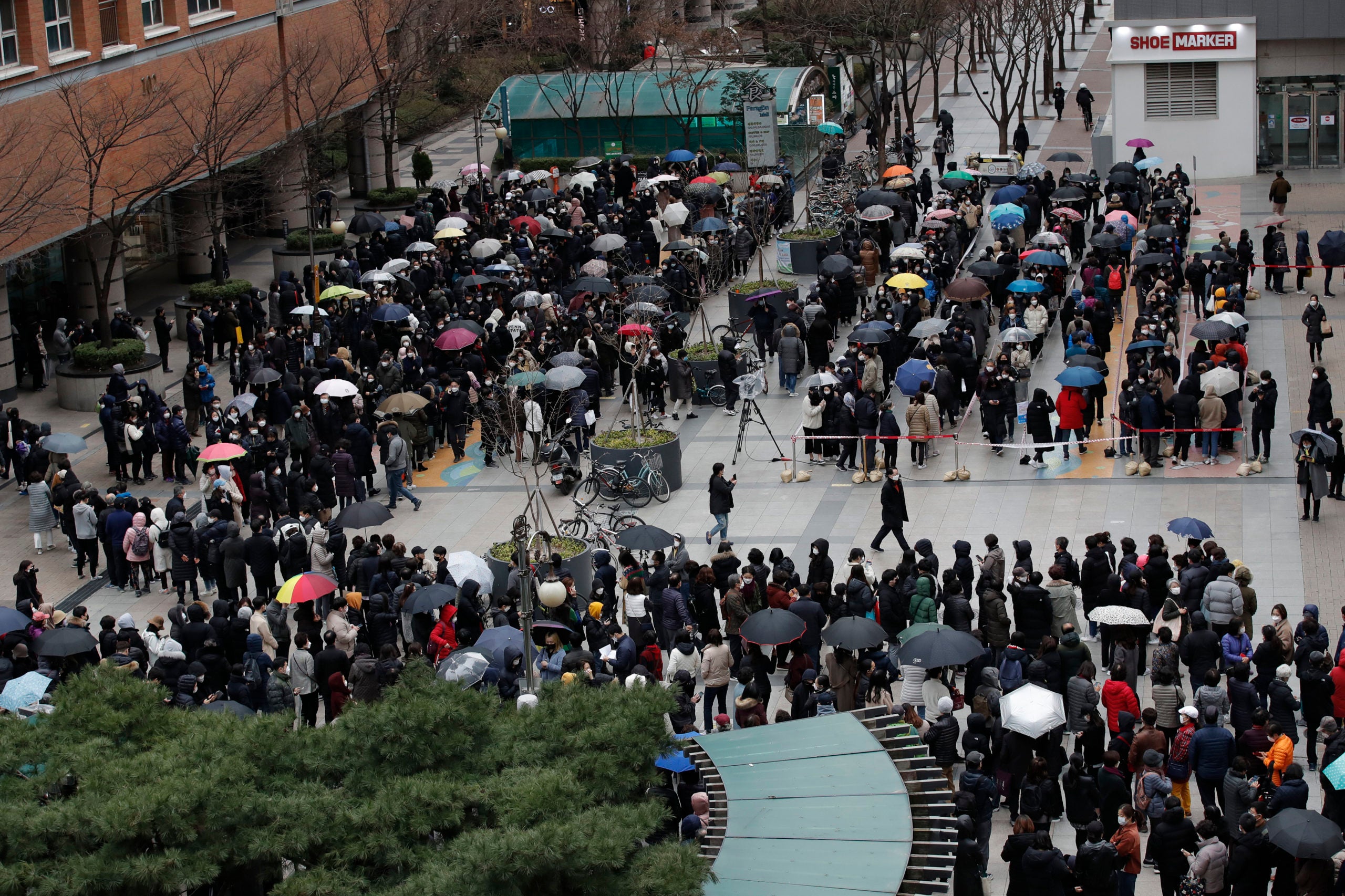 People line up to buy face masks to protect themselves from the new coronavirus outside a department store in Seoul, South Korea, Friday, February 28, 2020. (AP Photo/Lee Jin-man)

TOKYO — A deepening health crisis became an economic one, too, Friday, with the virus outbreak sapping financial markets, emptying shops and businesses, and putting major sites and events off-limits.

As the list of countries hit by the illness edged toward 60 with Mexico, Belarus, Lithuania, New Zealand, Nigeria, Azerbaijan, and the Netherlands reporting their first cases, the threats to livelihoods were increasingly eyed as warily as the threats to lives.

“It’s not cholera or the black plague,” said Simone Venturini, the city councilor for economic development in Venice, Italy, where tourism already hurt by historic flooding in 2019 has sunk with news of virus cases. “The damage that worries us even more is the damage to the economy.”

Tedros Adhanom Ghebreyesus, director-general of the World Health Organization, said the outbreak “has pandemic potential,” but whatever terminology officials used, the rippling effects were clear.

Attractions including Tokyo Disneyland and Universal Studios Japan announced closures and events that expected tens of thousands, including a tour by the K-pop group BTS, were called off.

Investors watched warily as stocks fell across Asia and girded to see if Wall Street’s brutal run would continue, while businesses both small and large saw weakness and people felt it in their wallets.

“There’s almost no one coming here,” said Kim Yun-ok, who sells doughnuts and seaweed rolls at Seoul’s Gwangjang Market, where crowds were thin Friday as South Korea counted 571 new cases — more than China. “I am just hoping that the outbreak will come under control soon.”

In Italy, where the count of 650 cases is growing, hotel bookings were dropping and Premier Giuseppe Conte raised the specter of recession. Shopkeepers like Flavio Gastaldi, who has sold souvenirs in Venice for three decades, wondered if they could survive the blow.

“We will return the keys to the landlords soon,” he said.

The economic hurt came with anger in Bangkok, where tenants at the Platinum Fashion Mall staged a flash mob, shouting “Reduce the rent!” and holding signs that said, “Tourists don’t come, shops suffer.”

Kanya Yontararak, a 51-year-old owner of a women’s clothing store, said her sales have sunk as low as 1,000 baht ($32) some days, making it a struggle to pay back a loan for her lease. She’s stopped driving to work, been using public transit instead, packed lunch instead of buying, and was cutting her grocery bills.

The situation is more severe than the floods and political crises her store has braved in the past.

“Coronavirus is the worst situation they have ever seen,” she said of the merchants.

Some saw dollar signs in the crisis, with 20 people in Italy arrested for selling masks they fraudulently claimed provided complete protection from COVID-19, the disease caused by the virus. Police said they were selling them for as much as 5,000 euros ($5,520) each.

Japan’s schools prepared to shutter and the country’s Hokkaido island declared a state of emergency, with its governor urging residents to stay home over the weekend. The Swiss government banned events with more than 1,000 people, while at the Cologne Cathedral in Germany, basins of holy water were emptied for fear of spreading germs.

Globally, more than 83,000 people have fallen ill with the coronavirus. China, though hardest hit, has seen lower numbers of new infections, with 327 additional cases reported Friday, bringing the country’s total to 78,824. Another 44 people died there for a total of 2,788.

South Korea has recorded 2,337 cases, the most outside of China. Emerging clusters in Italy and in Iran, which has had 34 deaths and 388 cases, have in turn led to infections of people in other countries. France and Germany were also seeing increases, with dozens of infections.