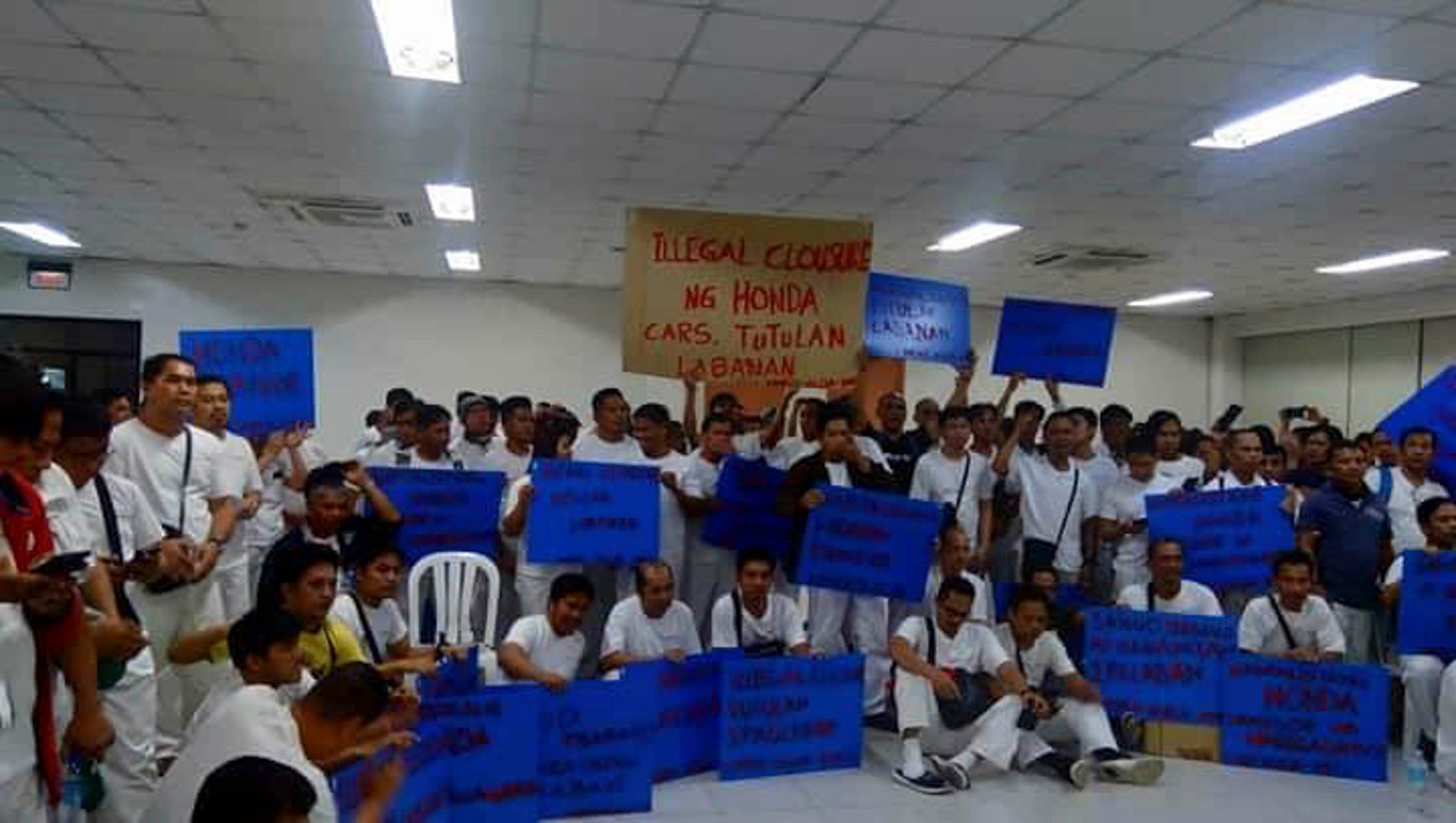 HOLED UP IN CANTEEN Some 200 workers at the Honda assembly plant in Santa Rosa City have stayed in the canteen since Saturday, demanding a separation pay that would allow them to start anew. —CONTRIBUTED PHOTO

Christopher Oliquino has been working in Honda’s car assembly plant  at Santa Rosa City in Laguna province for 25 years since he graduated from high school. The job would always be as stable as the cars he himself helped build, he had thought.

How he saw Honda then when he started as a welder at the age of 18 drastically changed on  Saturday when the automaker announced suddenly that it would no longer assemble cars in the Philippines.

“What we did for the company was no simple thing. For a very long time, it was our blood and sweat that helped Honda become what it is now. Whatever its profit is, it was because of our blood and sweat,” said Oliquino, now 42 and working in the maintenance section.

On Saturday, Honda’s company headquarters in Japan said it would close the plant in the Philippines, an announcement that stunned everyone—the government, the public and its more than 380 workers.

While most people learned about it online, the workers were first told about it by Noriyuki Takakura, president of Honda Cars Philippines Inc. (HCPI), in a video clip flashed through a projector at the plant canteen.

The shutdown was out of HCPI’s hands, according to the company’s spokesperson, Louie Soriano. He said the Laguna plant had been making too few cars compared with production figures in other countries.

Some 1,200 employees of parts suppliers and indirect contractors would also lose their jobs, according to Ferdinand Raquelsantos, president of the Philippine Parts Makers Association. Some of these suppliers have opened their businesses in the Philippines, specifically because of Honda, he noted.

For Oliquino, now the vice president of Honda’s labor union, Liga ng mga Manggagawa sa Honda, it was difficult to make sense of this ending when the beginning was so promising. His long years of labor have already intertwined his life with that of the assembly plant.

“Many people dreamed of working in Honda. It was a new company then. And if you say Honda, you know it’s owned by the Japanese. It was a gene­rous company. The benefits were good,” he said, recalling his younger days when he got accepted in a mass hiring back in the early 1990s.

He said he had not always planned to stay in Honda since he only wanted to save enough money for college. But he said there was a certain prestige in working for such a company, which made the compromise feel like nothing at all.

Since Saturday, around 200 union workers have locked themselves in the plant’s canteen, demanding a separation pay that would amount to something close to justice for them.

The decision to protest was made on short notice. When the shutdown was being announced, security men barricaded the place, barring employees from entering the plant, while leaving the cafeteria doors as their only way out.

Instead of leaving, the workers decided to stay, subsisting on sop and whatever food was left in the canteen.

Under the country’s Labor Code, a company must give workers a separation pay equivalent to one month or half a month’s pay for every year of service.

Honda’s first offer of separation pay, Oliquino said, was at least above what the law requires. In some cases, it offered two months’ pay for every year of service, depending on the worker’s age and tenure, he added.

HCPI  said it was offering a generous package in the sense that it was beyond the law’s bare minimum.

But for Oliquino and many other workers, this was still not fair.

“We don’t think it’s enough to start again,” Oliquino said, noting that many of their members were over 40 years old, a disadvantage in getting another job in a market that is already difficult even for fresh graduates.

Out of Honda’s hands

Other Honda factories around the world are closing, too.

As early as February 2019, Honda announced that it would restructure its global manufacturing network. The move would free up company resources that would be used for Honda’s strategy to come up with electric vehicles instead.

Back then, the company announced that it would be closing factories in the United Kingdom and Turkey, which make 150,000 and 38,000 cars every year, respectively.

A year later, Honda made the same announcement in the Philippines.

The difference, however, was how little time the workers in the country had to look for a fallback. The Honda plants in United Kingdom and Turkey have until 2021 before they close down, while the plant in the Philippines, which produced  only 8,000 cars last year, has only until next month.

Back in the early 1990s, Oliquino recalled how the factory assembled 120 cars every day on two shifts, with each shift putting together 60 cars. He said there were 700 to 800 workers then.

From 2002 to 2007, the company cornered an average of almost 14 percent of the automotive market in the Philippines, making Honda the third best-selling brand in the country, according to the Chamber of Automotive Manufacturers of the Philippines Inc. (Campi).

Higher excise under the Duterte administration’s tax reform program, which coincided with high inflation rates, had hurt demand for new vehicles. In 2018, vehicle sales fell by 16 percent to 357,410 cars, the worst full-year decline since the financial crisis in 1998, Campi data showed.

Honda, which used to make 120 cars every day, now makes only 18. Over the years, the work force had shrunk to around 380 workers, barely a shadow of the company’s glory days.

In the age of globalization, countries not simply compete with other countries, but also company subsidiaries in the same production network. Honda’s plant in the Philippines competes with its plant in Thailand.

“Given the absence of critical mass, this entails high production overhead. Without a large domestic market, this model of ‘manufacturing vehicles where the market is’ will be difficult to justify,” according to the Philippine Institute for Development Studies, citing a 2008 study.

Honda is the third big company in the Philippines that announced a shutdown this year as a cost-cutting move. Nokia Technology Center Philippines and Wells Fargo said earlier this year that they would soon shutter operations, leaving a combined total of 1,400 workers jobless.

“Look at the world. We are a small player, a small country compared to the global world demand. So you can expect a lot of this rationalization when global headquarters review their resources,” said Trade Secretary Ramon Lopez.

He refused to acknowledge if any factor had made the Philippines more vulnerable to rationalization. Instead, he blamed it on the global economy, which is currently struggling under the US-China trade war and coping with the new coronavirus epidemic.

This is not the first time that a car manufacturer closed down a factory in the Philippines because of small production volumes. Ford Motor, for example, had shut down its local production twice.

But even without an assembly plant, Ford Motor is still one of the best selling auto companies in the country. In 2019, industry data showed that Ford Motor Co. Philippines Inc. sold 21,900 cars, one of the largest volumes that year.

The same could be expected for Honda, which will still sell cars in the Philippines. It will just have to assemble them elsewhere, such as Thailand, which could make 420,000 cars every year.

Oliquino said he still had not thought about where he could work next.

“My focus right now is how our union members would feel that, somehow, they would be coming home to their families with at least something they could show for after serving here for many years,” he said.