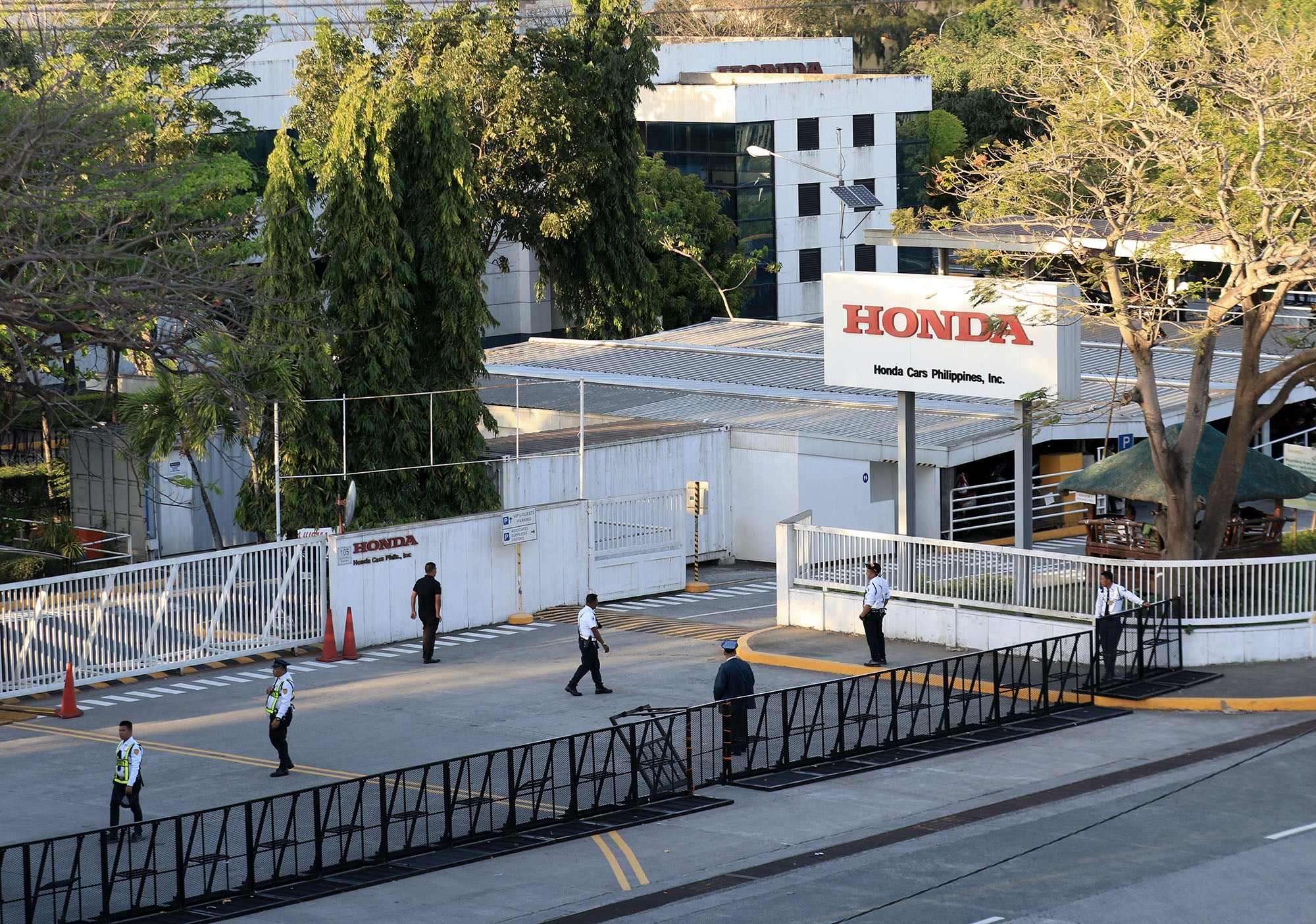 SHUTTERED Security guards man the entrance of Honda Cars Philippines assembly plant at Laguna Technopark in Santa Rosa, Laguna, where the firm’s workers are staging a picket to protest its closure. —RICHARD A. REYES

SAN PEDRO CITY, Laguna, Philippines — The city government of Santa Rosa, which hosts major car manufacturing companies in the Philippines, is about to lose P80 million in annual business taxes, with the closure of Honda Cars Philippines Inc. (HCPI).

Honda’s decision to shut down its plant in Laguna was reminiscent of the American Ford Motor Co.’s closure of its car assembly plant eight years ago.

Santa Rosa, which claims itself to be the “Motor City of the Philippines,” also hosts the car assembly plants of Toyota Motor Philippines, Mitsubishi Motors, Nissan and Hyundai.

While saying the economic losses were not small, city Mayor Arlene Arcillas hoped Honda’s shutdown would not impact heavily on the city’s local economy.

“My concern right now is the people who are about to lose their jobs,” Arcillas said in a phone interview.

The city government only learned of HCPI’s closure on Saturday, although the company’s management tried to reach the local government on Friday.

Honda said the closure was due to their “optimization efforts in the production operations in Asia and Oceania region.”

Louie Soriano, spokesperson for Honda Cars Philippines Inc., admitted that the announcement of the closure was “abrupt.”

“Honda needs to close down the Philippine factory because of its low production volume. It’s not because of an issue on politics, or an issue on government policy, or on labor union. It’s none of that,” Soriano said in a phone interview on Monday.

Last year, the Laguna plant produced only 8,000 units although it has the capacity to make 15,000 units every year.

He said that Honda would also close its manufacturing operations in Turkey and United Kingdom next year.

On Monday, or two days after the company released an online statement that it was shutting down, plant workers refused to leave the car plant’s premises until representatives from the Japanese company faced them.

Oliquino estimated HCPI’s total workforce at 630, with about 200 of them, mostly rank-and-file employees, holed up inside the plant.

Labor Secretary Silvestre Bello III on Monday said he was negotiating for more benefits for the almost 400 workers to be displaced by the closure of Honda’s plant next month.

In an interview, Bello said the prospect of the workers losing their jobs seemed inevitable.

“[I was told that] the issue of closure is nonnegotiable since the one that decided was the management of Honda Japan, not Honda Philippines,” he added.

But Bello said the Department Labor and Employment (Dole) has yet to receive the HCPI’s notice of closure.

“The workers said they too have not yet received the notice. So the termination and closure will take effect one month upon receipt of the notice,” he said.