NEW YORK  — U.S. stocks spun lower in a dizzying day of trading Thursday as worries about the viral outbreak that started in China knocked the S&P 500 off its record high. 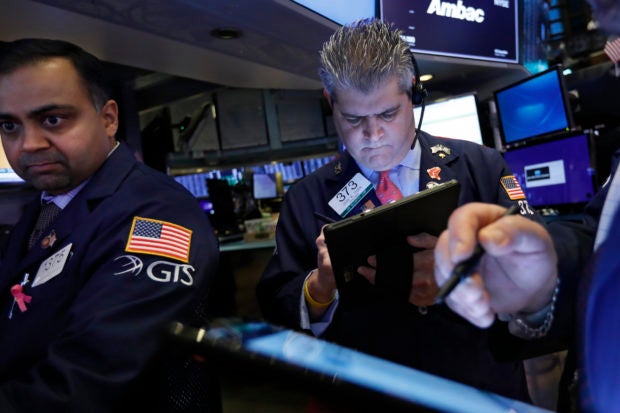 The market had started the day off higher following another round of stronger-than-expected reports on the U.S. economy, but it slumped suddenly in the late morning. The S&P 500 was down as much as 1.3% at one point, Treasury yields fell and the price of gold rose, before the moves moderated in the afternoon.

Market watchers said they didn’t see one clear trigger for the movements, which were reminiscent of the market’s sudden shifts during the height of the U.S.-China trade war, when stocks would swing sharply following tweets from President Donald Trump.

“You’re playing that back and forth, almost as you were during the trade war, where people were reacting to changes minute by minute.”

Stocks had been pushing higher for weeks, as investor belief hardened that stimulus and other efforts by central banks and governments around the world could limit the economic pain created by the virus. China’s central bank on Thursday cut its one-year prime rate to 4.05% from 4.15%.

But critics said stocks may have run too high, too fast given how uncertain COVID-19’s full impact on the global economy will be.

South Korea’s fourth-largest city, far from the center of the viral outbreak in China, urged residents to stay inside. The worry is that the number of new cases, which has been falling, could re-accelerate.

“Until we get a more definitive sign that the top is in, you’re going to have volatility back and forth and trades off coronavirus headlines,” Schutte said.

One measure of fear in the stock market, which shows how much traders are paying to protect themselves from future swings in the S&P 500, was up nearly 20% at one point in midday trading before more than halving the gain.

The increased caution pushed up the price of gold, which touched its highest price since early 2013. Investors also piled into the safety of U.S. government bonds, which in turn weighed on their yields. The 10-year Treasury’s yield sank to 1.52% from 1.57% late Wednesday.

Besides the toll on human lives, investors worry about how much economic damage the virus will cause. It’s already led to sharp drop-offs in manufacturing, travel and other economic activity in China, and the fear is how long that will last and how far it will spread in the interconnected global economy.

The world’s largest shipping company, Denmark’s A.P. Moller Maersk, said Thursday it expects a weak start to the year due to the virus.

Air France, meanwhile, said that COVID-19 could mean a hit of up to 200 million euros, or $220 million, for its operating results from February to April.

Procter & Gamble’s chief financial officer told analysts that traffic at stores in China, its second-largest market, is down considerably, though it held firm on its forecast ranges for sales and profit this year.

The worries overshadowed another set of encouraging data on the U.S. economy. A survey of manufacturers in the mid-Atlantic region jumped to its highest level since February 2017, and a separate report showed leading economic indicators in the United States rose more in January than economists forecast. The number of workers applying for jobless claims rose a touch, but it still remains low.

ViacomCBS slid 17.9% for the largest loss in the S&P 500 after it reported weaker results for the latest quarter than analysts expected.

The biggest gainer, meanwhile, was E-Trade Financial, which jumped 21.8% after Morgan Stanley said it would buy the online brokerage.