U.S. stock indexes closed with mostly modest losses Tuesday as the market gave up some of its solid gains from the past two weeks. 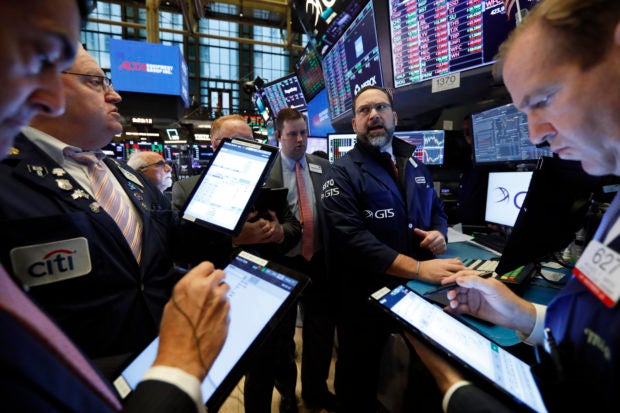 Traders gather at the post of Specialist Anthony Matesic, background center, on the floor of the New York Stock Exchange, Tuesday, Feb. 18, 2020. Stocks are opening lower on Wall Street after Apple said it would fail to meet its revenue forecast for the current quarter due to the impact of the virus outbreak in China. (AP Photo/Richard Drew)

Banks and technology stocks accounted for most of the decline. The Nasdaq eked out a tiny gain that was good enough to nudge it to another record high.

The selling, which lost some of its momentum in the final hour of trading, came as investors weighed the impact of the virus outbreak in China on Apple and other major companies.

The tech giant said revenue will fall short of previous forecasts in the fiscal second quarter because production has been curtailed and consumer demand for iPhones has slowed in China. Apple’s stores there are either closed or operating on reduced hours.

The iPhone maker is among the most notable companies to warn investors that the virus will hurt its financial performance.

“The longer this goes on, the greater the focus is going to be on how much is this going to impact companies like Apple, which is considered not only a bellwether in tech, but a bellwether for the market overall,” said Randy Frederick, vice president of trading & derivatives at Charles Schwab.

As in recent weeks, traders reacted to the latest developments in the viral outbreak that began in China and has since infected more than 73,000 people. Most of of the cases and deaths remain centered in China.

Businesses worldwide are increasingly caught in the economic fallout from the outbreak. The Beijing auto show, the industry’s biggest global event of the year, is being postponed indefinitely from its April date.

Apple and Medtronic are only the latest notable examples of companies that have warned investors about the economic impact of the outbreak on their financial performance.

Technology and health care companies have been the most vocal about mentioning the new coronavirus in their earnings conference calls, according to FactSet.

While Apple’s projected revenue miss took Wall Street by surprise, some analysts played down the long-term impact of the iPhone production delay on the company.

In a research note Tuesday, Canaccord Genuity analyst Michael Walkley said that Apple continues to perform strongly across all business lines, including iPhone 11 demand outside of China.

Despite the ongoing uncertainty over the viral outbreak investors have been willing to buy back into the market after a dip.
The S&P 500 has ended higher the past two weeks and is holding onto a 4.5% gain this month.

For the most part, investors are betting that the economic fallout from the outbreak will be limited to the first three months of this year, Frederick said. But if companies signal that they expect lingering effects on their business into the second quarter, investors could become less eager to jump back into the market.

“There are just so many people out there that think every dip is a buying opportunity, and so far, they’ve been rewarded,” Frederick said. “We’re going to see that for a while, until we have a really big downturn and people really get hurt by it. We just haven’t had that in a long time.”

Technology stocks accounted for a big slice of the selling Tuesday. Several chipmakers, which rely heavily on China for sales and supplies, fell. Intel dropped 1.7% and Broadcom slid 2.2%.

Communication services stocks and utilities held up better than most of the market. T-Mobile US rose 3.5% and Xcel Energy rose 1.3%.

Financial services company Franklin Resources jumped 6.9% after saying it is buying competitor Legg Mason for $4.5 billion. The deal will create a financial company with a combined $1.5 trillion in assets under management. Legg Mason shares vaulted 24.4%.