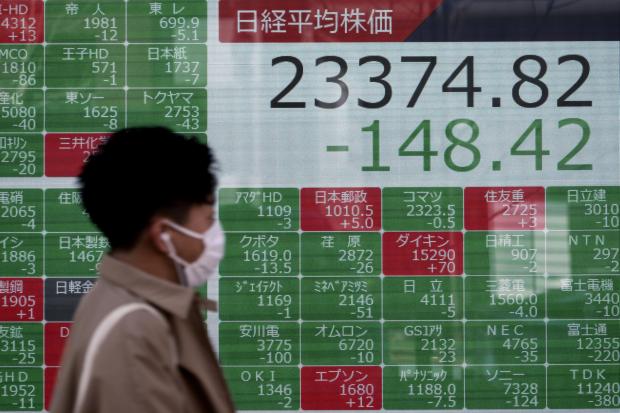 A man walks in front of an electronic stock board showing Japan’s Nikkei 225 index at a securities firm in Tokyo Tuesday, Feb. 18, 2020. Shares have fallen in Asia as the impact from the virus outbreak that began in China deepened, with Apple saying it would fail to meet its profit target and China moving to cancel major events including the Beijing auto show. (Photo by EUGENE HOSHIKO / AP)

BANGKOK — Stock markets slipped Tuesday as the impact from the virus outbreak that began in China deepened, with Apple saying it would fail to meet its profit target this quarter and China moving to postpone or cancel major events, including the Beijing auto show.

As the outbreak persists, bringing new travel advisories and disrupting trade, travel and supply chains, it is casting a widening shadow over the regional economy.

South Korean President Moon Jae-in said Tuesday that the coronavirus crisis has put the country’s economy in an “emergency situation” and called for aggressive efforts to support companies dependent on trade with China and prompt up consumption.

Governments around the region have cut interest rates, extended tax breaks and taken other measures to cushion the blow to businesses from plunging tourism and disrupted supply chains.

“Best to buckle in as we could be in for a bumpy ride the next few weeks as I’m struggling to find any research report that doesn’t suggest Covid-19 could significantly affect short term earnings: Reiterate Sell,” analyst Stephen Innes of AxiCorp said in a report.

China’s biannual auto show, one of the industry’s biggest international events, has been postponed, and many sports and entertainment events have been delayed or canceled to avoid travel that may spread the virus. The death toll from the outbreak rose to 1,868, with confirmed cases totaling 72,436.

But China looks likely to postpone its annual congress, the biggest political meeting of the year. The standing committee for the National People’s Congress will meet Feb. 24 to deliberate postponing the meeting that is due to start March 5.

Apple Inc. joined the growing number of companies who are forecasting a hit to their bottom lines from the outbreak, which has prompted Chinese authorities to put into lockdown cities that are home to more than 60 million people.

Apple warned its investors on Monday that it won’t meet its second-quarter financial guidance because the outbreak has cut production of iPhones. The company said all of its iPhone manufacturing facilities are outside Hubei province, the epicenter of the outbreak, and all have been reopened. But production is ramping up slowly.

Meanwhile, bank HSBC said it expected a hit from the virus’s disruption to business as it unveiled a deep overhaul of its operations, including 35,000 job cuts. Its shares were down over 6%.

In other trading, benchmark U.S. crude oil lost 92 cents to $51.13 per barrel in electronic trading on the New York Mercantile Exchange. It gained 63 cents overnight. Brent crude oil, the international standard, lost $1.13 to $56.54 per barrel. It gained 35 cents on Monday.