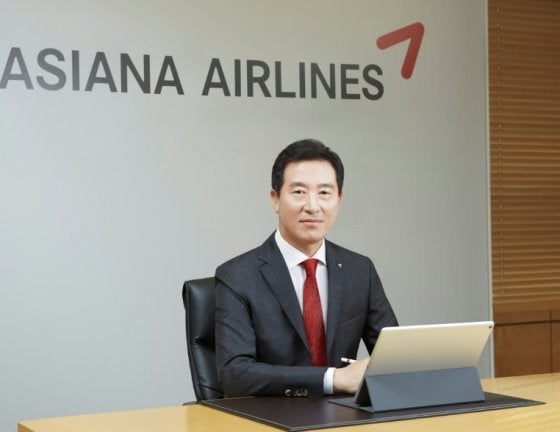 SEOUL — Korean full-service carrier Asiana Airlines said Tuesday that all executives, including the CEO, have offered to resign to improve the company’s financial health, which has been severely hurt by the latest outbreak of the coronavirus that has cut into aviation services.

In a letter sent to Asiana employees, the air carrier’s CEO Han Chang-soo said that the company has activated an emergency business management due to the crisis following the epidemic outbreak.

Han said that all executives, including himself, have requested to resign to share the burden of the company’s difficult business situation, as part of a self-rescue plan to dramatically “cut down anything that is not related to boosting the company’s profitability.”

But Asiana Airlines officials said the voluntary resignations are not to be accepted right away, as the company needs them to operate.

“Their resignation illustrates how firm the company is devoted to execute all-out effort to save cost,” an official told The Korea Herald.

Not only that, the company said it will activate 10 days of unpaid leave for all employees, including ground crew, cabin crew and maintenance workers, to minimize the workforce following the reduction of its China routes.

Due to the latest outbreak of the novel coronavirus that is believed to originate in Wuhan, China last month, Asiana Airlines has reduced 79 percent of its China routes and 25 percent of flights to Southeast Asian countries.

To save costs, the company will further cancel or minimize the planned events, including the company’s 32nd celebration of the founding day and the reward bonus for celebration, Asiana said.

A labor union of pilots said that they agreed for all pilots to take 15 days of leave and return 50 percent of their bonus pay. They also proposed to indefinitely postpone education sessions for those promoted or transferred to a new position.

Meanwhile, Asiana’s new owner HDC Hyundai Development Company said that despite the latest struggles, there will be no change in its plan to acquire the company at 2.2 trillion won ($1.85 billion).

The acquisition process has been underway since last year, while the process will be completed after a due diligence review, HDC said. HDC will officially grab control of the air carrier’s business from late April.