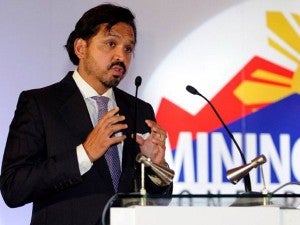 The Philippine government must “act decisively” on its mining policy and bring an end to provincial ordinances that “defy” national law and “damage” international confidence in the country’s mineral investment policies.

“The much publicized ban on open pit mining in some localities and the general ban on mining in some areas have caused a slowdown on major projects and expenditure flows have been shelved with some investors looking beyond the Philippines for mining investments,” the joint position paper said.

A “clear statement” on how the government intended to intensify the mining industry’s growth as one of the priority industries would help shore up investor confidence, the groups said.

Last Thursday, the Chamber of Mines issued a separate statement saying it was “deeply concerned” as the ban in Zamboanga del Norte affected two of its member-companies: TVI Resource Development (Philippines) Inc. (TVIRD), which operates a copper-zinc mine in Siocon town, and Philex Gold Philippines Inc., which plans to revive its gold project in Sibutad municipality.

The Inquirer earlier reported that the provincial assembly in Zamboanga del Norte had published the ordinance last week. In a statement issued Tuesday last week, TVI Pacific said it would challenge the “unconstitutional” ordinance in court.

The Chamber of Mines earlier expressed concern about the open pit mining ban in South Cotabato, which was signed by the outgoing provincial government in mid-2010.

The ban threatens the $5.9-billion Tampakan copper-gold project of Xstrata Copper-led Sagittarius Mines Inc. When completed, the Tampakan project is seen to become the biggest single foreign direct investment in the Philippines.

Read Next
IMF official: Philippines should stick to deficit-reduction schedule
EDITORS' PICK
Alex Eala wins Grand Slam on Independence Day: ‘I hope I made my contribution to the country’
EDITORIAL: Good news, bad news
1Sambayan to nominees: Stick to word of honor
Trust Robredo’s political instincts – Kaya Natin! convener
Ahead of ONE: Full Blast II, Mongkolpetch warns Elias Mahmoudi: ‘Watch out for my fists’
Kai Sotto continues to inspire Filipinos by sharing his passions and stories with Smart Prepaid
MOST READ
China cautions G7: ‘small’ groups don’t rule the world
Duterte, Mayor Sara unlikely to run under same slate in 2022, says Lacson
1Sambayan to nominees: Stick to word of honor
PH to have cloudy, rainy Monday — Pagasa
Don't miss out on the latest news and information.