PH among economies most vulnerable to virus 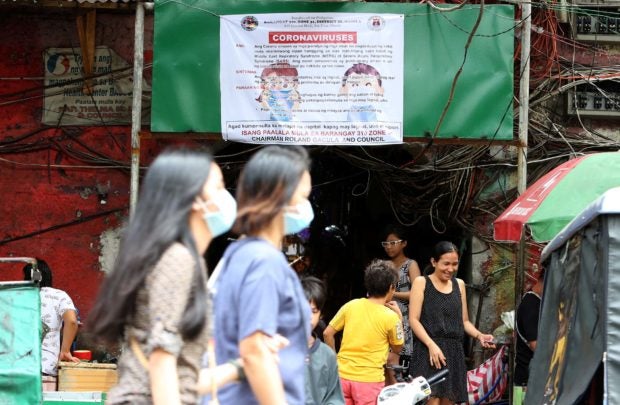 INFO DRIVE A tarpaulin about the 2019 novel coronavirus has been put up by local officials in Barangay Sta. Cruz in Manila amid the virus scare in the country.—MARIANNE BERMUDEZ

MANILA, Philippines — The country’s economic managers are preparing a raft of measures to counteract the economic impact of the novel coronavirus (nCoV) outbreak after the Philippines was identified as being among the three most vulnerable countries to the ongoing contagion.

Finance Secretary Carlos Dominguez III said on Friday that while it was too early to determine the impact of the outbreak to the Philippine economy, the government was “ready to implement monetary and fiscal tools to counter potentially adverse economic fallout.”

The Bangko Sentral ng Pilipinas has already cut key interest rates by 25 basis points (bps) last week in what Governor Benjamin Diokno described as a move “ahead, rather than behind the curve”amid the external risk.

The government must “maintain a vigilant stance to assure biological safety and good health of the population,” Dominguez said after a study by the London-based Overseas Development Institute (ODI) identified the Philippines as one of the countries most vulnerable to the contagion.

In a report titled “Economic Vulnerabilities to Health Pandemics: Which Countries are Most Vulnerable to the Impact of Coronavirus,”authors Dirk Willem te Velde and Sherillyn Raga said the Philippines, along with Vietnam, were the most vulnerable after Sri Lanka.

The study was based on a vulnerability index that considered countries’ exposure to the virus that originated in China and its economic fundamentals, particularly its spending for public health which, in the case of the Philippines, was only 4.4 percent of gross domestic product (GDP).

Dominguez echoed the fear of Socioeconomic Planning Secretary Ernesto Pernia that the Philippines may shed about 0.3 percentage point of the country’s GDP growth this year “but again, we’re not teetering on the edge of bankruptcy. We have a very resilient economy,” Dominguez said.

He admitted though that the effects of the contagion are already creeping into travel and tourism.

“The airlines and the rest of the tourism industry are going to feel the pinch. I don’t know how long. I don’t know if the virus has already peaked. I think there are still new cases coming in,” Dominguez added.

Exporters to be hit

“We’ll probably see a hit in some manufacturing, especially those manufacturers who export to the Wuhan area. We don’t know how much of the factories there are really closing because that will affect our sales,”Dominguez said.

But Trade Secretary Ramon Lopez last week said Hubei province, where the city of Wuhan is located, accounted for only 1.2 percent of Philippine imports from China and the situation in China may also benefit the Philippines.

Lopez said Chinese factories that cannot buy raw materials from Wuhan or Hubei province could turn to the Philippines, which can also serve as temporary operations base for Chinese vehicle parts makers while China reels from the closure of factories in China.

“We received reports from some importers that they could not ship their exports from China to the Philippines because of lack of manpower,” Guerrero said.

However, the Philippines also has strong points that may shield the economy: its high dollar reserves, relatively low spending and cash deficits and low external debt levels.