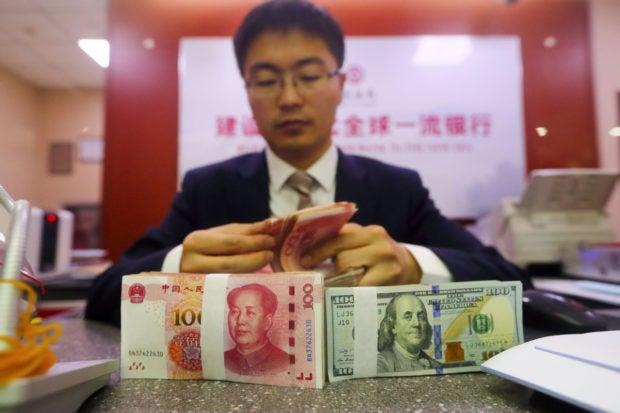 A teller counts cash at a bank outlet in Taiyuan, capital of Shanxi province. [Photo/China News Service] via China Daily

BEIJING — The yuan continued to hold ground and did not retreat far from the psychological threshold of 7 per US dollar during the three trading days after the extended Lunar New Year holiday, with the market expecting a relatively stable value for the currency amid the fight against novel coronavirus epidemic.

The central parity rate of the yuan, or the daily trading reference rate against the US dollar, weakened by 44 basis points on Wednesday to 6.9823. The onshore yuan exchange rate strengthened to 6.98 per dollar on Wednesday.

Global central banks have expressed concern on the currency fluctuations and indicated a willingness to stimulate economic growth as the novel coronavirus epidemic had increased the downside risks for the world economy.

On Wednesday, the Monetary Authority of Singapore said there is “sufficient room” for the currency to ease, if the economy weakens due to the novel coronavirus epidemic. Similar stimulus may be taken by central bankers in Japan and Australia to shield the economy. The possible monetary easing such as further interest rate cuts will see currencies retreating, especially in Asia.

“Investors should take a rational view on the short-term yuan fluctuations,” said Xie Yaxuan, chief analyst of China Merchants Securities.” The outbreak came suddenly and had a significant impact, but the relevant response measures have been taken in a timely manner, and the fluctuation will not change the foundations that support a stable yuan in the long run.”

When the epidemic retreats, the depreciation pressure on the yuan will ease, he said. But in the short term, the extension of the Lunar New Year holiday due to the epidemic will have a negative impact on exports in February, increase the trade deficit and prompt concerns about the yuan exchange rate.

The yuan has appreciated against the US dollar after the Phase One agreement between Washington and Beijing signaled an easing in the long-standing trade friction between the two largest economies in the world. On the last trading day before the Lunar New Year holiday, the onshore yuan was traded at 6.93 yuan per dollar, weaker than the 6.9292 yuan per dollar in the offshore market.

Monetary authorities have long reiterated, with the latest being in the two-page chapter of the China-US Phase One trade deal, that China would not devalue its currency for competitive advantages.

There was also consensus that the Chinese central bank has abandoned its direct intervention in the foreign exchange market for quite some time now. It is unlikely that the People’s Bank of China, the central bank, will intervene in the market, even if the epidemic control measures continue for a longer time.

The PBOC will continue to let the market take a decisive role in setting the yuan rate, according to analysts, who believe the policy approach to keep the yuan rate basically stable at a reasonable and equilibrium level will not change during the fight against the epidemic.

Guan Tao, a professor of economics at Wuhan University and a former official of the State Administration of Foreign Exchange, said that the central bank needs to come out with plans to deal with exchange rate fluctuations, based on scenario analysis and pressure tests, to improve the macro and micro-prudential management framework on supervising cross-border capital flows, and avoid “excessive fluctuation of the foreign exchange market”.