Disconnect? Stocks rising despite fears over the coronavirus

NEW YORK — The coronavirus outbreak has exposed a seeming disconnect between the financial markets and science. 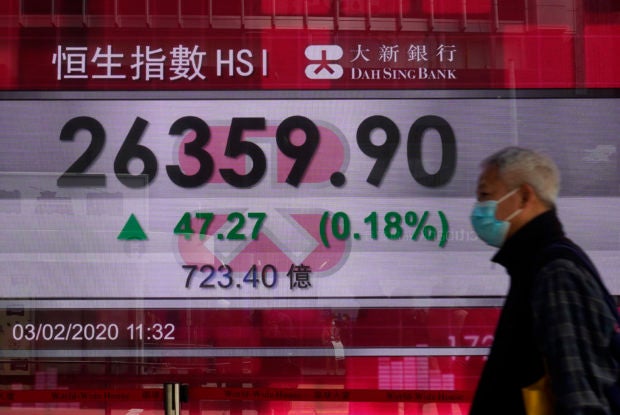 A man walks past a bank electronic board showing the Hong Kong share index at Hong Kong Stock Exchange Monday, Feb. 3, 2020. The Shanghai Composite index tumbled 8.7% Monday then rebounded slightly as Chinese regulators moved to stabilize markets reopening from a prolonged national holiday despite a rising death toll from a new virus that has spread to more than 20 countries. (AP Photo/Vincent Yu)

Health experts don’t know how far the virus from China will spread and how bad the crisis will get, yet stocks are rallying as if investors are expecting no more than a modest hit to the global economy.

On Wall Street, the S&P 500 erased all its losses from the past few weeks and hit a record on Wednesday, while markets in Japan and Hong Kong, closer to the center of the crisis, rose as well.

The gains came even as the number of people infected globally surged to more than 24,500 and the death toll climbed to 491, with the overwhelming majority of cases in China.

Investors aren’t pretending to know any more than the scientists.

But after an initial, mini-freakout over worries about a big blow to China, the world’s second-largest economy with 1.4 billion people, and the potential ripple effects, investors are taking into account better-than-expected earnings from some of the globe’s biggest companies and other encouraging economic indicators from outside China.

Perhaps most important, investors are looking at more than just the public health measures that are being taken against the virus; they are taking into account the financial tools available to counter the economic damage.

They are hoping that even if the virus spreads further, central banks can once again come to the rescue and prop up the global economy by cutting interest rates and offering other stimulus, much as they have done since the 2008 financial crisis.

Early this week, in fact, China’s central bank announced plans to pump $173 billion into the economy to help calm markets.

“We listen to health care experts,” said Nate Thooft, global head of asset allocation at Manulife Asset Management. “We are reading research from epidemiologists. But as with anything with the market, there’s a level of faith and hope and underlying sentiment that keeps people in the market. People are still willing to hang onto equities because they haven’t been scared enough.”

Such faith perhaps shouldn’t come as a surprise. The U.S. stock market has been running higher since the spring of 2009, its longest bull run on record, and has repeatedly beaten back worries about impending recessions, global trade wars and the threat of real war — for example, after the U.S. drone strike last month that killed a top Iranian general.

“Everybody knows that it’s going to have an impact on the global economy and specifically China,” said Scott Ladner, chief investment officer for Horizon Investments.

“It’s not that there’s going to be zero impact. It’s that we don’t think the impact is going to be long-lasting or so severe that there can’t be governmental policies to help blunt the impact.”

While stock analysts might feel confident that the economic impact can be contained, public health experts don’t know yet what course the outbreak will take. In fact, they are still trying to answer basic questions about the virus, including just how easily it spreads and how deadly it is.

Tedros Adhanom Ghebreyesus, director-general of the World Health Organization, said Wednesday that there is still a “window of opportunity” to contain the outbreak and that the U.N. agency is focusing its efforts on helping Chinese authorities stem the spread of the virus from the city of Wuhan, where it first emerged over a month ago.

At the same time, Tedros said that in the preceding 24 hours, the WHO had seen the biggest jump in cases since the start of the epidemic.

U.S. health officials said it would be premature to comment on when the outbreak might peak or whether strategies to contain it are working.

“We’re preparing as if this is a pandemic,” said Dr. Nancy Messonnier of the Centers for Disease Control and Prevention. A pandemic is defined as outbreaks of a disease on at least two continents.

Researchers around the world are scrambling to develop a vaccine, but even if testing and manufacturing go perfectly, it may take at least a year before one is ready for widespread use. Similarly, it is too early to tell if some promising potential treatments work any better than standard ones.

In other developments Wednesday:

— The WHO asked for $675 million to help countries deal with the expected spread of the virus. Tedros acknowledged that is a lot, but “it’s much less than the bill we will face if we do not invest in preparedness now.”

— Two planes carrying about 350 Americans evacuated from Wuhan landed in California. They will be quarantined for 14 days at two military bases.

— Nearly 3,700 people face a two-week quarantine in their cabins on a cruise ship in the port city of Yokohama, Japan, while in Hong Kong, more than 3,600 people on another ship awaited screening after it was banned by Taiwan.

— As thousands of hospital workers in Hong Kong went on strike for a third day to demand the border with mainland China be closed completely, the city announced that all people entering from the mainland, including Hong Kong residents, must be quarantined for 14 days.