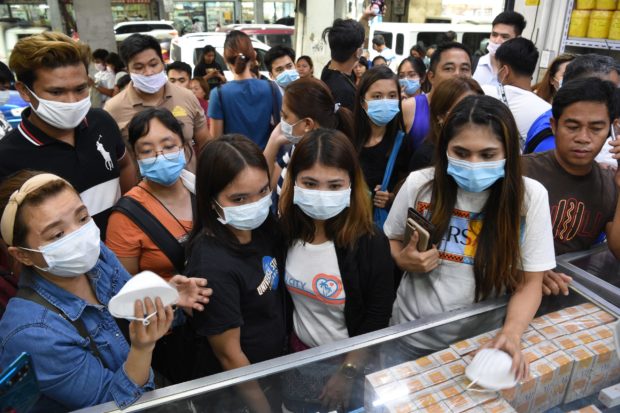 Inflation was up to an eight-month high of 2.9 percent last January but the government said prices of masks and other items, which ran out of supply at the height of Taal’s eruption and the novel coronavirus scare, remained stable.

The 2.9 inflation rate was mainly driven by higher food prices, attributed to supply cuts as a result of Taal’s eruption, and effect on alcohol and tobacco prices by new sin taxes.

Latest data from the Philippine Statistics Authority (PSA) showed prices of personal care products, which included masks, and health items like vitamins, medicines and rubbing alcohol remained stable despite a spike in demand and reports of hoarding and low supply.

The third tranche of an increase in oil taxes under the Tax Reform for Acceleration and Inclusion (TRAIN) Act took effect last Jan. 1.

Mapa said prices of beef, chicken, fish and vegetables also picked up as a result of the eruption of Taal Volcano, which disrupted supply from farms in the Calabarzon region.

Rice prices continued its slide, however, dropping 6.5 percent last January, the ninth straight month of decline. It was mainly due to liberalized importation.

Among the bottom 30 percent income households, inflation was up 2.6 percent last January from 2.1 percent in December, Mapa said. It was lower than 4.9 percent in 2019, however.

The PSA is already using 2012 as base year to measure inflation for the poor.

The government projects inflation this year to settle in the 2-4 percent range.

In 2019, the rate of increase in prices or basic commodities averaged 2.5 percent, the lowest since 2016.