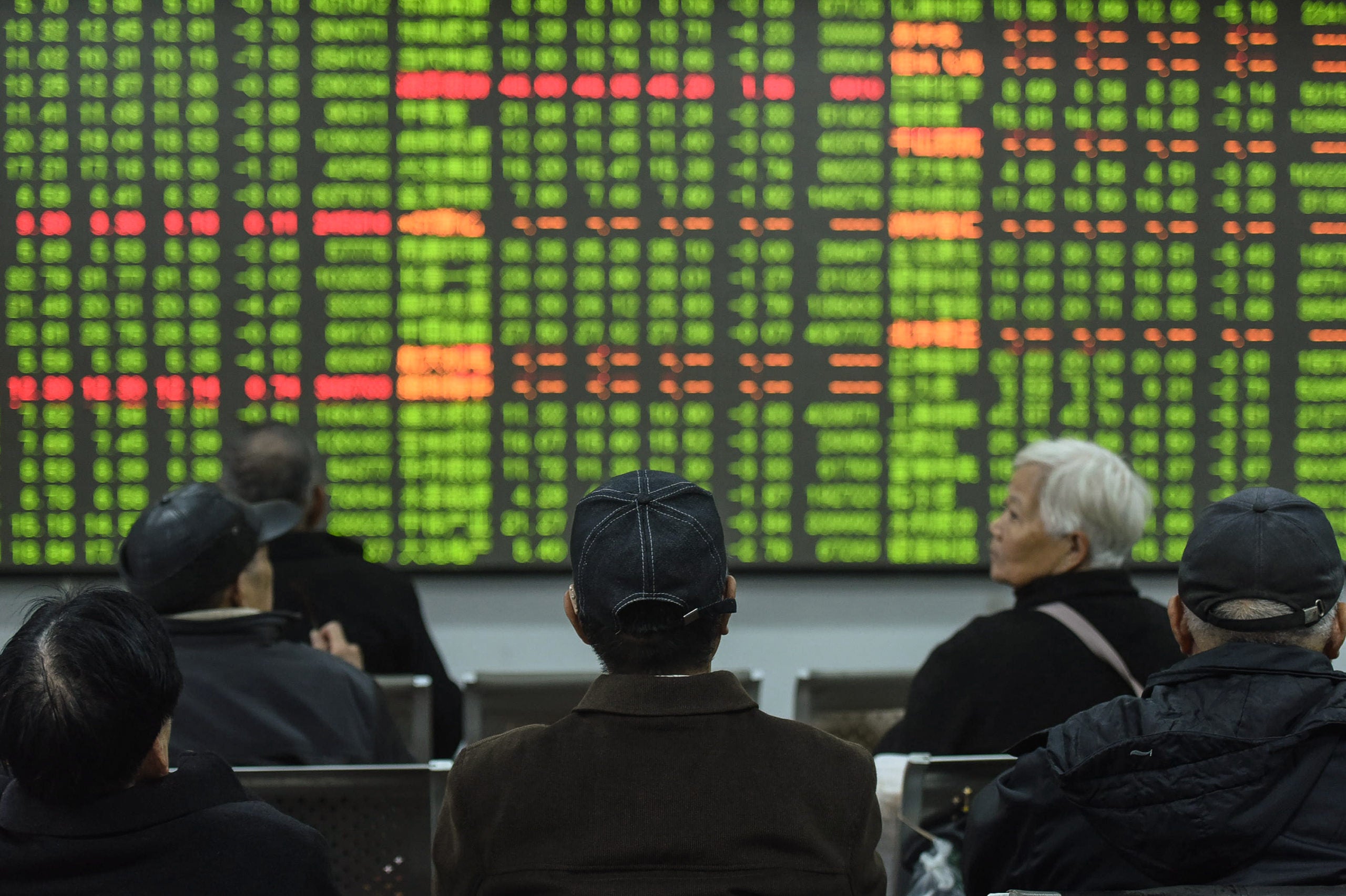 Investors look at a screen showing stock market movements at a securities company in Hangzhou in China’s eastern Zhejiang province on February 3, 2020. – Chinese stocks crashed on February 3 with some major shares quickly falling by the maximum daily limit as the country’s investors got their first chance in more than a week to react to the spiraling coronavirus outbreak. (Photo by STR / AFP) / China OUT

SHANGHAI — Chinese stocks collapsed Monday with Shanghai’s index posting its biggest single-day drop since 2015 – and hundreds of firms plunging the maximum 10 percent – as panic set in over China’s coronavirus epidemic.

Monday was the first time in more than a week that Chinese investors were able to react to a viral outbreak that has now killed more people than the 2002-03 SARS outbreak, and they sold frantically.

The scale of the plunge in China was remarkable even by the standards of the country’s notoriously volatile markets, indicating deep concern over the economic impact of the epidemic.

The last time Chinese indices plunged as much was when an equities bubble popped in 2015.

“Investor panic quickly spread across the board and will be dominating the market over the short term,” said Yang Delong, chief economist at First Seafront Fund.

More than 2,600 stocks fell by the 10 percent daily limit, according to Bloomberg financial data.

The yuan also weakened more than 1.5 percent, falling through the key 7-per-dollar threshold.

Markets in the world’s second-biggest economy had closed on January 24 for the week-long Lunar New Year holiday, but since then the viral epidemic that started in Wuhan has spread globally.

Markets were scheduled to reopen on Friday, but the government extended the holiday to help deal with the crisis.

In the meantime, stock markets worldwide sank as major corporate names froze or scaled back their Chinese operations, threatening global supply chains that depend heavily on the country.

China’s central bank said it would pump 1.2 trillion yuan ($173 billion) into the economy on Monday to help stabilize markets.

Volatility will reign until there are clear signs that the coronavirus is contained, analysts said.

Travel and tourism shares plummeted after domestic and international travel curbs were imposed to slow the virus.

Individual Chinese stocks can only move 10 percent in either direction each session before being suspended – a measure intended to limit volatility.

Foxconn Industrial Internet, an arm of Taiwanese tech giant Foxconn, was also limit down at 18.00 yuan.

Foxconn has closed its Chinese factories until at least mid-February, potentially affecting supply chains for tech companies that rely on it for everything from Apple’s iPhones to flat-screen TVs and laptops.

Many healthcare stocks gained, however, as Chinese rush to stock up on face masks and other medical supplies.

Shares in Shanghai No. 1 Pharmacy and China Meheco both were suspended after surging 10 percent higher.

The People’s Bank of China said its market intervention was aimed at maintaining banking system liquidity and a stable currency market.

China’s economy is expected to take a gut punch from the crisis, which has brought industrial regions grinding to a halt.

The government’s ability to ease the pressure on the economy may be limited, said Wang Tao, China economist with UBS.

“Given that China was already facing the challenges of a worsening external environment and relatively weak business confidence, policy support may not achieve the designed impact as usual,” Wang said in a research note.

Even if the coronavirus is contained in the first quarter, she added, “we believe the economic impact will be at least as large as SARS,” which crimped Chinese growth in 2003.

China’s benchmark iron ore contract declined by its daily limit of eight percent on Monday, while copper, crude and palm oil also sank by the maximum allowed, according to Bloomberg News.