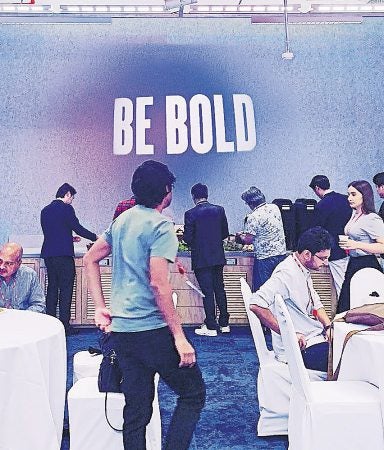 Facebook’s values are boldly displayed in the company’s
Singapore headquarters.

If Facebook were a human being, it could be said that self-improvement is his/her mantra this 2020—particularly surrounding major social issues election interference; data privacy and security; terrorism-type content; and misinformation.

“We have rolled out what we think is the most transparent political advertising system of any major publisher in the world,” said Dan Neary, Facebook Apac vice president. “When you run a political ad on Facebook, it is labeled, it is archived, and it is available to the public. So you will see who ran that ad, how much they spent on the ad, and where it actually ran.”

Neary, among other Facebook Apac executives, facilitated short and comprehensive discussions about the company’s developments for the region in its first Apac Press Day, held recently in its Singapore headquarters.

To moderate terrorism-type content (e.g. those related to global terrorist groups such as ISIS), Neary said the company was monitoring such activity, and that around 35,000 people are assigned to maintain safety on the platform.

“About 15,000 of them are content reviewers, but there are also folks who are focused on antiterrorism; there are FBI types; there are all these different kinds of functions that were never really part of our organization before, but because of our focus on this, we’ve added,” said Neary. “We’ve also paired this organization up with artificial intelligence (AI). We’re using more and more machine learning to spot questionable content and transactions across the platform.”

Machine learning technology has also helped Facebook eliminate fake accounts. According to the company, during the third quarter of 2019, 1.7 billion fake accounts were disabled globally, 99.7 percent of which were detected by the platform’s tools before they were even reported.

“If you think about fact-checking, we’ve partnered with over 55 different agencies that are guaranteed fact-checkers. It’s one of the ways that we are able to spot content that might be misinformation,” Neary said. “When a fact-checker labels something as false content, the first thing we do is reduce its overall distribution. And if somebody goes ahead and tries to share that content, that person receives a notification that fact-checkers have determined that to be false information.”

Here in the Philippines, advancements in the fight against misinformation has been one of the company’s major achievements. One particular focus is the disruption of coordinated inauthentic behavior (CIB), or when people or organizations create networks of accounts to mislead others about who they really are, or what they’re really doing.

“When we take down one of these networks, it’s because of their deceptive nature,” said Facebook Philippines in a statement.

In October 2018, the local office took down a spam network of 95 pages. In early 2019, a digital marketing group was banned for CIB, and 220 Facebook pages, 73 Facebook accounts, and 29 Instagram accounts were taken down because of the same activity. And then in March last year, the company had to take down 200 pages, groups and accounts that engaged in the same behavior on Facebook and Instagram.

Addressing these major social issues is just one part of Facebook’s self-improvement story in Apac. The company has three other priorities: to introduce more tech innovation; to continue investing in small and medium businesses; and, generally, to be a “force for good.”

Small and medium businesses (SMBs), in particular, are “a big investment for Facebook.” Across Apac, the company has trained over 320,000 SMBs in 197 locations—50 percent of which are run by female entrepreneurs—under programs such as #SheMeansBusiness, Made By Loved By, and Boost with FB.

According to Facebook Philippines, one of their best accomplishments include their work with local SMBs. Locally, the company’s business programs have provided over 25,000 SMBs with tools and digital skills training to help them and their enterprises thrive.

And as part of their mission to be a “force for good,” the company also continues to help improve the digital literacy of their communities. In the Philippines alone, the Digital Tayo Program has trained over 150,000 outbound overseas Filipino workers (OFWs) , in partnership with the Overseas Filipino Workers’ Welfare Administration. In 2019, that program was expanded to include OFWs based in Singapore.

There was also the Digital Youth Summit, a three-day digital literacy summit which brought together student leaders, social innovators, community developers and tech enthusiasts, representing student groups from across the Philippines to arm them with the skills they need to run online digital literacy campaigns in their communities; and the CyberGuardians Initiative (done in partnership with the Council for the Welfare of Children, the Department of the Interior and Local Government, and Plan International), a digital parenting program designed to equip, initially, around 80 parents and caregivers with the knowledge and skills to guide their children as they navigate the worldwide web.

Facebook Philippines’ resources for the CyberGuardians Initiatives have been localized by their NGO partners for adoption in rural and grassroots communities starting this year. Moreover, Facebook Philippines plans to provide “digital citizenship” training to one million Filipinos, also within the year.

“When we came into 2019, Mark [Zuckerberg] laid out these priorities—and these aren’t things that we’re going to do over a quarter or two,” said Neary. “This is a long-term commitment in the areas where the companies are focusing moving forward. We’ve communicated this externally, as well as internally. We will hold ourselves accountable.”