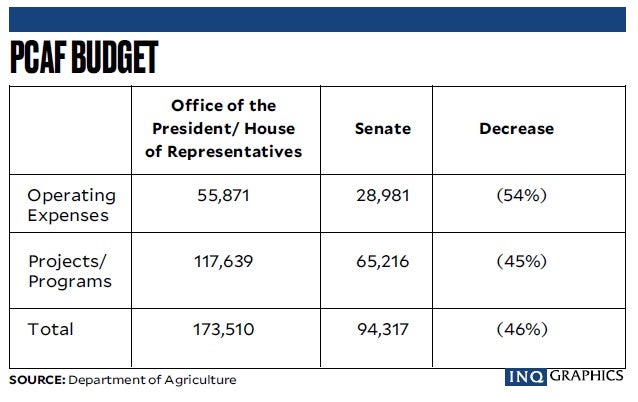 Private sector participation in agriculture governance, albeit mandated by law, is in danger of being killed.

This was raised during the January 27 meeting called by the Philippine Council for Agriculture and Fisheries (PCAF) at the Department of Agriculture (DA).

Thankfully, the new but well-qualified PCAF Executive Director Dr. Liz Battad said she was open to specific recommendations so that this would not happen. Agriculture Undersecretary Ariel Cayanan, who supervises PCAF, said in a later interview that some of these recommendations made sense.

Agriculture Secretary William Dar probably did not know of the PCAF restructuring proposal, because it was exactly the opposite of his announced advocacy for more private sector involvement.

Why the alarming concern? Consider the PCAF budget below, where the Senate version has been adopted for 2020.

Indeed there will be less private sector participation because of the significantly decreased income or budget, but the bigger problem is seen in the abolition of critical committees. These committees are: Budget Monitoring, International Trade ( which covers monitoring smuggling), Mechanization (where P5B is allocated annually) and Climate Change. Distributing these concerns to specific product groups ignores the policy and cross-curing concerns of these committees.

The DA has the distinction of being the only department with a legal mandate to involve the private sector in governance. Thanks to contributions from the private sector, several policies and practices have been introduced and successfully implemented.

Even corruption issues, such as the pork scam case and the fake non-government organizations related to the Janet Napoles controversy, were uncovered largely because of PCAF and private sector involvement.

Unscrupulous forces are now working to minimize this private sector role. This could pave the way for DA officials to connive with such forces with minimum transparency.

In the age of globalization and free trade where we need the best technologies and practices to export and compete against cheap imports, the private sector is even more necessary now because of their unique knowledge.

There are several other cases uncovered by the sector, led by Alyansa Agrikultura (AA) leaders. All this resulted in government corrective actions.

One example is the millions of pesos lost through the secretive DA Agricultural Competitiveness Enhancement Fund.

Corrupt officials allegedly got as much as 30 percent of the proposed loan. Unscrupulous borrowers supposedly freely sourced from this, knowing they would not be penalized if they did not pay back the loan.

AA members were offered similar packages. They promptly reported these to PCAF.

A decrease in private sector participation will mean an increase in corruption.

All is not lost, however. At the recent PCAF meeting, the private sector participants stated they were very willing to spend their own money for operating expenses such as transportation and meals.

But they strongly opposed the abolition of the committees, noting strategic and innovative proposals germinate here.

The good directions Battad has started should not be diminished by wrong structural adjustments. Structure must follow strategy.

You cannot have an effective private sector participation strategy with a structure that castrates this participation.

Following Dar’s direction, the PCAF structure should instead improve, rather than minimize , private sector involvement. If this participation is enhanced, agriculture can follow the upward trajectory Dar is helping us achieve.

The author is Agriwatch chair, former Secretary of Presidential Programs and Projects and former undersecretary of Agriculture and Trade and Industry. Contact him via [email protected]