Headwinds and tailwinds: Philippine property in 2020 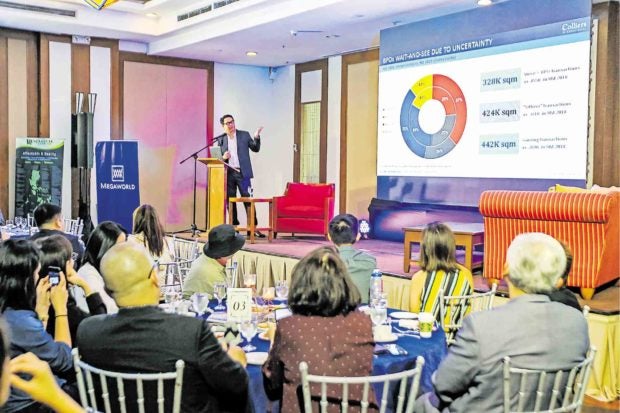 Raymundo cited uncertainties in policies and fiscal regime as primary reason for the outsourcing companies’ wait-and-see stance, relative to their expansion plans. 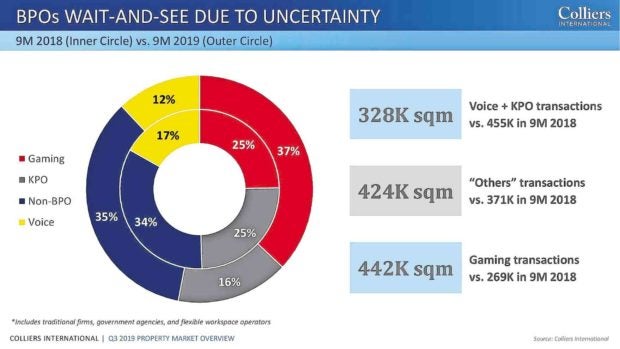 Last Jan. 22, our managing director, Richard Raymundo, had the pleasure of being one of the speakers at Inquirer Property’s first forum titled, “State of Real Estate: A Clear Vision for 2020,” held at the Manila Polo Club. He shared the stage with Prof. Enrique M. Soriano III of W+B Advisory and what transpired was an engaging and informative experience as the event brought together key players, investors and enthusiasts of the Philippine real estate industry.

Richard’s presentation focused on the Philippine property market outlook for 2020, including the expected headwinds and tailwinds. There was also a brief discussion of the property sector’s performance in 2019.

Colliers observed that while the property sector remained robust in the past year, we saw key adjustments in the strategies of property players over the last 12 months, including the:

Development of more co-living projects as real estate companies and commuters adjust to the worsening traffic in Metro Manila;

Aggressive landbanking and office construction activities outside Metro Manila as developers follow the government’s infrastructure plan while they identify alternative expansion sites for occupants including Philippine Offshore Gaming Operators (Pogos) and business process outsourcing (BPOs) amid the government’s economic zone moratorium in the capital region and pending approval of a tax reform bill that purges tax perks granted to investors.

But Colliers sees a number of headwinds that might constrict the property segment’s growth moving forward. These include the following:

Lingering concerns on the final version of the Comprehensive Tax Reform Program to be approved by Congress. The delay in the approval of the measure that proposes to reduce corporate income tax rates and rationalize tax incentives granted to foreign investors has been compelling occupants to take a wait-and-see stance; and

Challenges to full utilization of the government’s infrastructure budget, which are likely to result in delayed construction of vital public projects that provide direction to property developers’ expansion strategies. 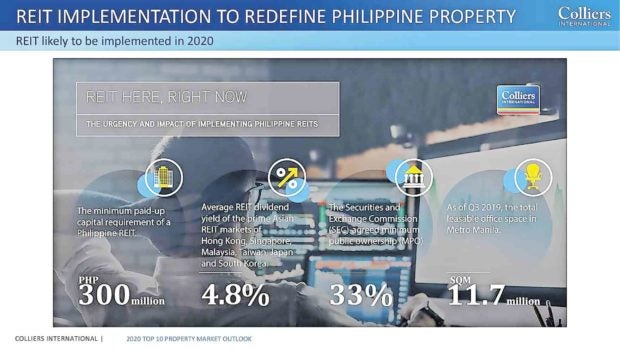 Despite these, we still see opportunities in the market. For instance, Colliers believes that economic growth over the next 12 months will likely remain public infrastructure-driven. This should have a positive impact on developers’ projects as bridges, airports, railways and toll roads help unlock land values and strengthen the demand for transit-oriented developments.

Colliers also sees the Pogo sector being a major office space demand driver in 2020. Offshore gaming firms have dominated the office market in the first nine months of 2019. Traditional occupants such as banks and government agencies are similarly driving the demand.

Colliers sees the completion of about 1 million sqm of new leasable retail supply over the next three years. In our opinion, mall operators should continue to implement innovative leasing strategies and attract interesting tenants to fill the substantial amount of new retail space. 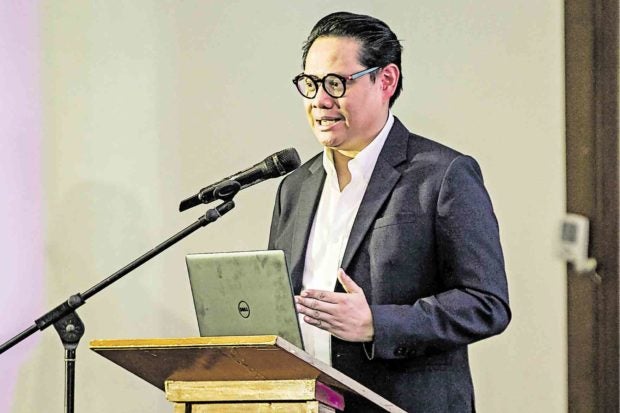 Raymundo discussed the Philippine property market outlook for 2020, including expected headwinds and tailwinds. 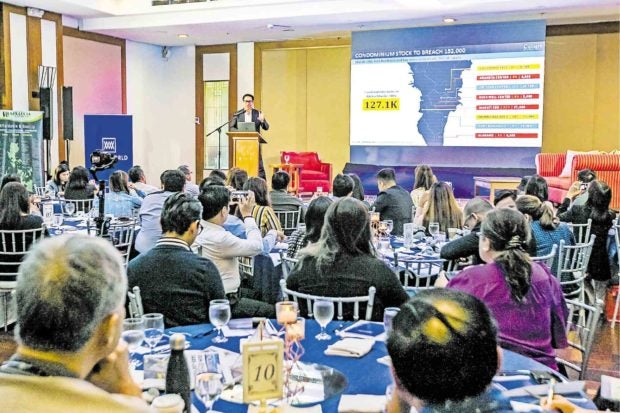 But with office vacancies hovering between 0.5 percent and 1.0 percent in prime locations such as the Makati CBD and the Bay Area, these operators have been scrambling to find suitable space.

But a major development that is likely to redefine the Philippine property sector in the next 12 months is the full implementation of the Real Estate Investment Trust (REIT) law.

Colliers believes that there is greater interest in the implementation of the REIT law following the signing of the amended implementing rules and regulations (IRR) governing REITs in the country. The implementation is likely to develop the country’s property and capital markets. REITS should also stoke the construction and infrastructure sectors, which have significant multiplier effects to the economy.

To best take advantage of REITs, Colliers recommends that developers undertake the following:

Several developers have expressed interest in REITs. It will be interesting to see which developer will be able to secure the first-mover advantage.